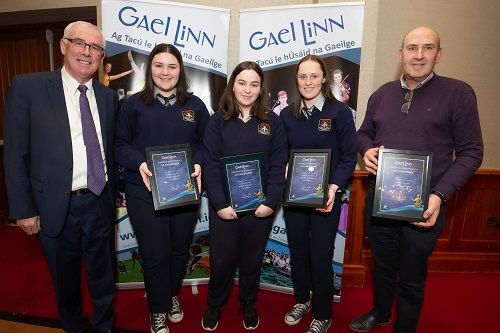 Pobalscoil Ghaoth Dobhair were the runners up in Gael Linn All-Ireland debating final which were held in the Salthill Hotel, Galway on Wednesday last 22nd January.

Comórtas Uí Chadhain is an Irish debating competition for all-Irish secondary schools with a junior and senior section, and over 50 schools nationally took part in this year’s competition which started back in October 2019.

The motions debated in the finals were extremely topical at the moment, with the Pobalscoil Ghaoth Dobhair team of Gráinne Ní Ghallchóir, Deirdre Ní Chumhaill and  Clodagh Ní Ghallchóir debating the motion ‘Ba cheart dúinn bata agus bóthar a thabhairt don rialtas seo ag an olltoghchán atá le teacht!’  ( We should show the door to the present government in the forthcoming election!  ) The team were excellently prepared by their teacher Pól Mac Cumhaill.

The high standard of debating at the event posed a considerable challenge to the five adjudicators, Áine Máire Ní Ghioballáin, Seán Mac Labhraí, Peadar Ó Tuathail, Liam Mac a’ Mhaoir and Sinéad Ní Ghuidhir, in their task of selecting the winners.

After much deliberation however they announced that Coláiste Chroí Mhuire, An Spidéal were victorious in the senior final.

The winning teams in each section were each presented with a perpetual trophy and a voucher worth €1,000, while vouchers worth €250 were awarded to each of the runners up.

Micheál Ó hÉanaigh, CEO of Údarás na Gaeltachta was the guest speaker on the night.

A former participant himself in years gone by he recalled memories of debates he had taken part in, and commented that the experience had stood to him along the way in his chosen career.

He praised all the young orators for their command of current affairs and contributed his own opinions on the motions debated.

Congratulating all of the participants on their great achievement, Sean Ó Ceallaigh from Gael Linn said it was hugely encouraging for them in Gael Linn to see these young debaters achieve such high standards.

“There are many presenters and journalists on TG4 and RTÉ Raidió na Gaeltachta who are former participants in Gael Linn debating competitions, he stated.

“He also thanked the teachers involved with the teams who reached the finals and indeed the teachers from other schools around the country who worked with other teams but who failed to qualify for the finals, he said”