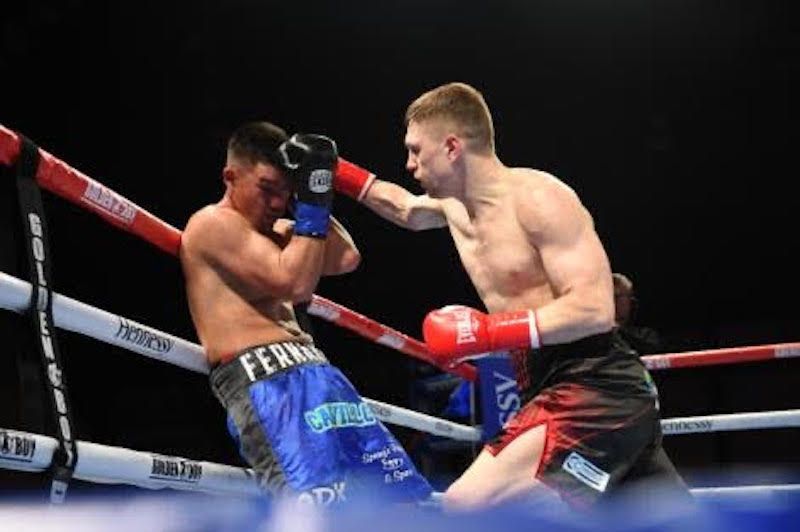 JASON Quigley dominated Fernando Marin for a super third round stoppage in California.

By Chris McNulty, Ringside at The Hangar. Pictures by Valentin Romero

Quigley stopped Marin one minute and 47 seconds into the third stanza of a bout in which the Ballybofey man completely overpowered his opponent.

In the second round, Quigley landed 49 of 74 punches and the Mexican was fortunate that Jerry Cantu, the referee, didn’t step in during those three minutes.

Quigley rocked Marin with a series of hammer punches in the second.

The end was nigh and it came with just over a minute left in the third.

Quigley caught Marin with a short right to the orbital bone. Marin reached for his face and, in something of a delayed reaction, he dropped to the canvas as Quigley improved to 18-1, 14KOs as a professional.

“I was catching him with some lovely shots in the second round,” Quigley said.

“He’s got one hard head, I’ll tell you that. I didn’t get much time to prepare, but I knew he could take some heavy shots, and he showed that tonight again. I was happy to get him out of there in the third round.”

Quigley remains committed to his goal of becoming world champion and has recently noted how he now craves ‘momentum’ back in his career. Last weekend, Quigley was listed back among the top 15 of the WBC’s world middleweight rankings and now he is fully intent on climbing the ladder.

He said: “I’ve never called anybody out in my life. But give me (Jaime) Munguia. He beat a fellow Irishman of mine (Gary O”Sullivan). I’m not calling him out with disrespect or anything like that. I’m a fighter who wants to be a world champion.”

Marin was a late replacement following the withdrawal of original opponent Oscar Cortes. On Monday night, Team Quigley were informed that Cortes had pulled out, but fellow Mexican Marin stepped into the void.

‘El Cacho’ was out of action from a loss to Martin Islas in August 2017 until he KO’d David Ochoa last March.

This represented only the second time for the 31-year-old to fight outside of Mexico. In July, he was stopped by Serhii Bohachuk in the third round of a super-welter contest in Hollywood.

Quigley had originally been planning for a mid-February showdown, but jumped at the chance to get 2020 started a month earlier.

Still fresh from a December win over Abraham Cordero, the Ballybofey man weighed in for those on at 164.4lbs on Wednesday afternoon, with Marin touching the scales at a lighter 162.2lbs.

The link-up with Andy Lee, a former WBO world champion, offered Quigley a chance to realign his compass and the win over Cordero shook off some cobwebs; nerves, even.

Here, there was further enhancement.

Quigley said: “Working with Andy has been great. I’m maturing and progressing every time. It’s the first fight that I actually enjoyed my performance in a long time. I made a lot of sacrifices and changes.

“My career was in limbo for a little bit. I think tonight showed that I did the best thing possible for me.”

Quigley stopped Cordero in the third round of their bout at the Hangar and it was back to familiar territory, seven weeks on.

Everything from the robe, the trunks, the entrance music – ‘Natural’ by Imagine Dragons – was as it had been last month.

And, just as it was in December, the stoppage came in the third round.

Do you know this suspected jewellery thief?

‘Clean’ Letterkenny moves up the ranks in...

Update: Man due in court after Garda...