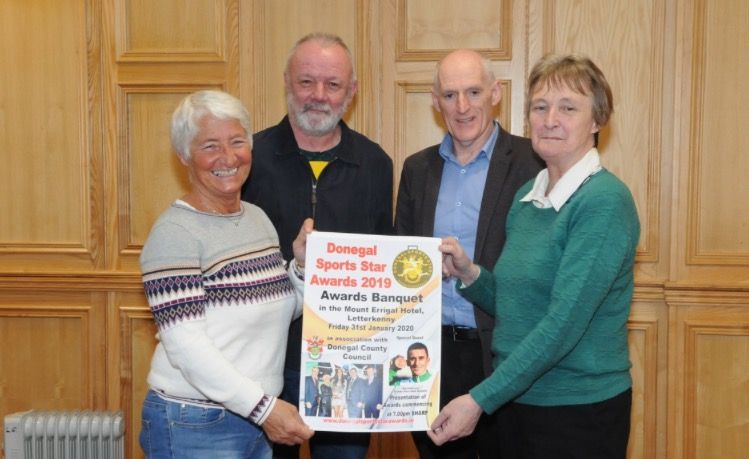 It’s going to be a full house again for the Donegal Sports Star Awards which takes place next Friday night in the Mount Errigal Hotel. Around 600 guests will be present for the gala awards ceremony where the special guest will be former Irish Race Walking Olympic and World Championship medalist Rob Heffernan.

Nominees who have not already booked tickets need to urgently contact the Mount Errigal Hotel to be put on a reserve list and get an update on their request.

Donegal Sports Star Chairperson Grace Boyle said her committee was delighted that 44th Awards was again sold out. “It’s very satisfying for us as a committee to see that our efforts to make the Donegal Sports Star Awards the biggest sporting function in the County annually is continuing and is reflected in a full house again for next Friday night. A number of nominees have not yet booked their tickets. We have a reserve list but those nominees need to contact the Mount Errigal Hotel as soon as possible in order to be included and to get an update on their request” Ms Boyle said.

Donegal County Council are once again the exclusive sponsors of the Awards. Cathaoirleach Cllr. Nicholas Crossan and Chief Executive Seamus Neely have both been speaking about the huge success of the Donegal Sports Star Awards has been since the first presentation function in the Milford Inn in November 1976. The Cathaoirleach said it was important to remember the committee who had the idea of staging the first awards back in 1975.

“As we celebrate our sporting heroes, I think it is fitting to pay tribute to the foresight of a small number of people who in 1975. introduced the first Sports Star Awards to Donegal.

“The fact that the Donegal Sports Star Awards continue to be the highlight of the calendar year for many sporting enthusiasts in Donegal and the fact that receiving this type of recognition from your own peers in your own home county continues to be a very special occasion for even the most recognised sports person is a wonderful accolade to the small group of people who first initiated these awards back in 1975.

“What is most remarkable is the array of sports that so many of our people have excelled in.  From sports that would be considered a minority sport to the more well known sports enjoyed by many in the county, Donegal Sports Star Committee has not been found wanting in ensuring that these outstanding sporting achievements have been recognised and celebrated and this is what makes the Donegal Sports Star Awards such a special occasion in the life of Donegal” Cllr Crossan said.

It’s now over 40 years since Donegal County Council got involved with the Awards first the schools categories and later becoming the exclusive sponsor of the function. Chief Executive Seamus Neely says the Local Authority has had a very special bond with the Donegal Sports Star Awards since the late 1970s. “Donegal County Council is delighted and honoured to be the long standing sponsors of the Donegal Sports Star Awards and we have been associated with the awards since 1979.

Sport is important in the lives of people living in Donegal, it helps form the building blocks of our communities, it supports the development of our children and young people and it helps promote an active and healthy lifestyle for people of all ages.

I believe that it is only right to take the time to recognise and celebrate the hard work and dedication of our sports stars and of their remarkable achievements.

And what makes these awards even more special is that they not only recognise the achievements of our most talented sports people but also of the people who have helped them along the way from coaches and volunteers at underage levels to families, friends, teachers and all those who have played a significant role in enabling these achievements.

The Donegal Sports Star Awards Committee have done a tremendous service for Donegal for over 40 years and I would like to wish the committee continued success in celebrating the sporting talent that we have in this county” Mr Neely concluded.

Gaoth Dobhair take U21 A Championship in...