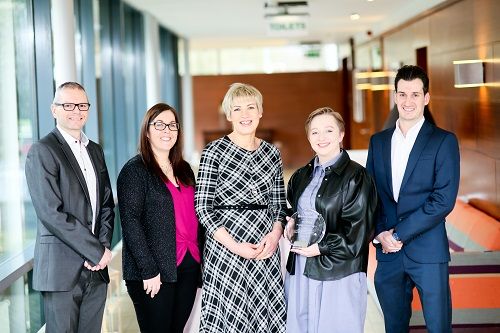 Hats off to Hanna’s after InterTradeIreland innovation award

Hanna Hats, the family owned designer and manufacturer has been awarded “Exemplar  Status” as part of InterTradeIreland’s FUSION programme.

It is one of only five businesses to be recognised across the island of Ireland.

Hanna Hats of Donegal, a third generation company that has been in business for nearly 100 years, is proof that age is no barrier to innovation.

The firm took part in InterTradeIreland’s FUSION programme – an initiative that supports business development and innovation by partnering companies with third level institutions, and high caliber graduates in science, engineering or technology for up to 18 months.

The graduate works directly with the business to deliver new products or improved processes.

This collaboration with the Donegal town business has helped to re-assert Hanna Hats as an exclusive manufacturer in the international market.

Alan Morrow, Director of Operations at InterTradeIreland said they were really impressed with how Hanna Hats has married tradition with innovation.

“This is a company with its eye firmly on the future.

“This is what the FUSION programme is about – giving firms the tools to boost their business through innovative collaboration.

“The partnership between Hanna Hats, Rachel Blanckensee the graduate, and the external support from North West Regional College has made a real difference.

“There is big commercial benefit to both the company and local area.

“We’re delighted to recognise Hanna Hats as a FUSION Exemplar,” he said.

Eleanor Hanna, General Manager says it’s rare that you get a chance to review your entire business, but that’s what the FUSION initiative did for them.

“We were paired with design graduate Rachel Blanckensee and North West Regional College.

“It has led to a new exclusive range. We are excited that the FUSION project has given us the opportunity to put processes in place for ongoing new product development.

“Our products are 100 per cent made and manufactured in Ireland.

“Through the FUSION initiative, we’ve also introduced new technology, which has made us more efficient. That’s important when you’re up against cheap imports. Though the quality and heritage of Hanna Hats is what really sets us apart,” she said.

Eleanor Hanna’s  grandfather started this business in 1924 and her father John Hanna continued the success of the company.

Eleanor said she would recommend InterTradeIreland to any SME that wants to grow its business.

Fergal Tuffy, the Technology and Innovation Manager at North West Regional College said projects such as this one shows you what can be achieved through collaboration with business and academia.

“We are now working with several other Donegal companies that want to innovate.

“The InterTradeIreland FUSION programme is a great way to form a collaboration to help a business make their ideas a reality.’’ he said.