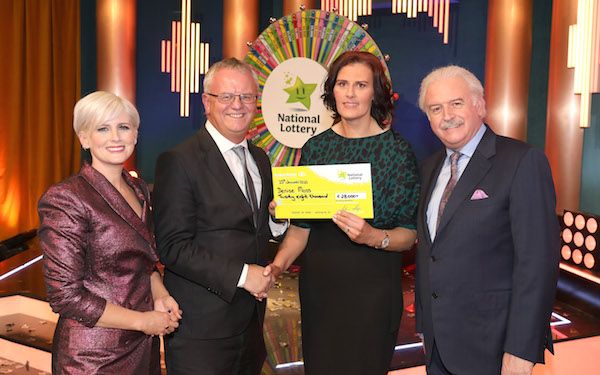 Denise Moss from Castlefinn but now living in Castlederg, Co. Tyrone was overjoyed with her €28,000 cash win on the RTE One programme.

Denise insists she is not a lucky person in any way shape or form but that all changed when her husband, Martin roared the house down two Saturday evenings ago when he was watching Winning Streak, a Saturday night ritual in their home.

This was because his wife’s name had come out of the drum to appear on the next week’s show. Denise couldn’t believe the news and as the celebrations kicked off she was still pinching herself.

Denise and Martin have been married for 24 years, with Denise, who grew up in Castlefinn, moving to Tyrone to be with him.

The couple have three children aged from 22 to16. Stephen, Louise and Marie all enjoyed their day out to Dublin to watch their mum win some cash on TV.

They were joined by Martin and two of Denise’s sisters: Maureen and Annemarie as well as many of Martin’s relatives. Denise’s dad, Danny, sister, Cathy and brothers Shane, Danny and Johnathon will were watching on from home in Donegal.

In her spare time Denise likes to relax by running and keeping fit. She is a member of Aghyaran Athletic Club in Tyrone where she meets with the club twice a week for training. With her winnings from the show, Denise wants to get some home improvements – beginning with a new kitchen!

The Winning Streak National Lottery TV game show is co-presented by Marty Whelan and Sinead Kennedy and features some perennial favourite games including Play or Pay, Roll for Riches, WinFall and Electric Dream – where one player will win an electric car worth €25,000.

As ever one of the lucky five players will get the chance to spin the wheel and win up to €500,000. An exciting element of the show is that one €100,000 segment will be added to the Grand Prize Wheel every show if less than that amount was won in the previous show, improving players chances to win a massive prize.

A brand new-look Winning Streak scratch card is available in more than 5,800 National Lottery retailers all over the country. In addition to the chance to appear on the Winning Streak TV game show if you get three stars, players will also be in with a chance to win some great cash prizes up to €5,000.

The odds of winning a cash prize or a three star prize for those who purchase a Winning Streak scratch card is 1 in 1.86. All players who purchase a scratch card can send their stubs into the National Lottery using grey envelopes, available in all National Lottery agents, where each week on the show, a player will be drawn as the winner of a Luxury Cruise for two valued at €5,000.

Nearly 30 cent in every €1 spent on Winning Streak and all National Lottery games goes back to Good Causes in the areas of sport, youth, health, welfare, education, arts, heritage and the Irish Language.

In total, more than €5.6 Billion has been raised for Good Causes since the National Lottery was established 32 years ago. In 2019 alone, €250 million was raised for local Good Causes in communities across Ireland.