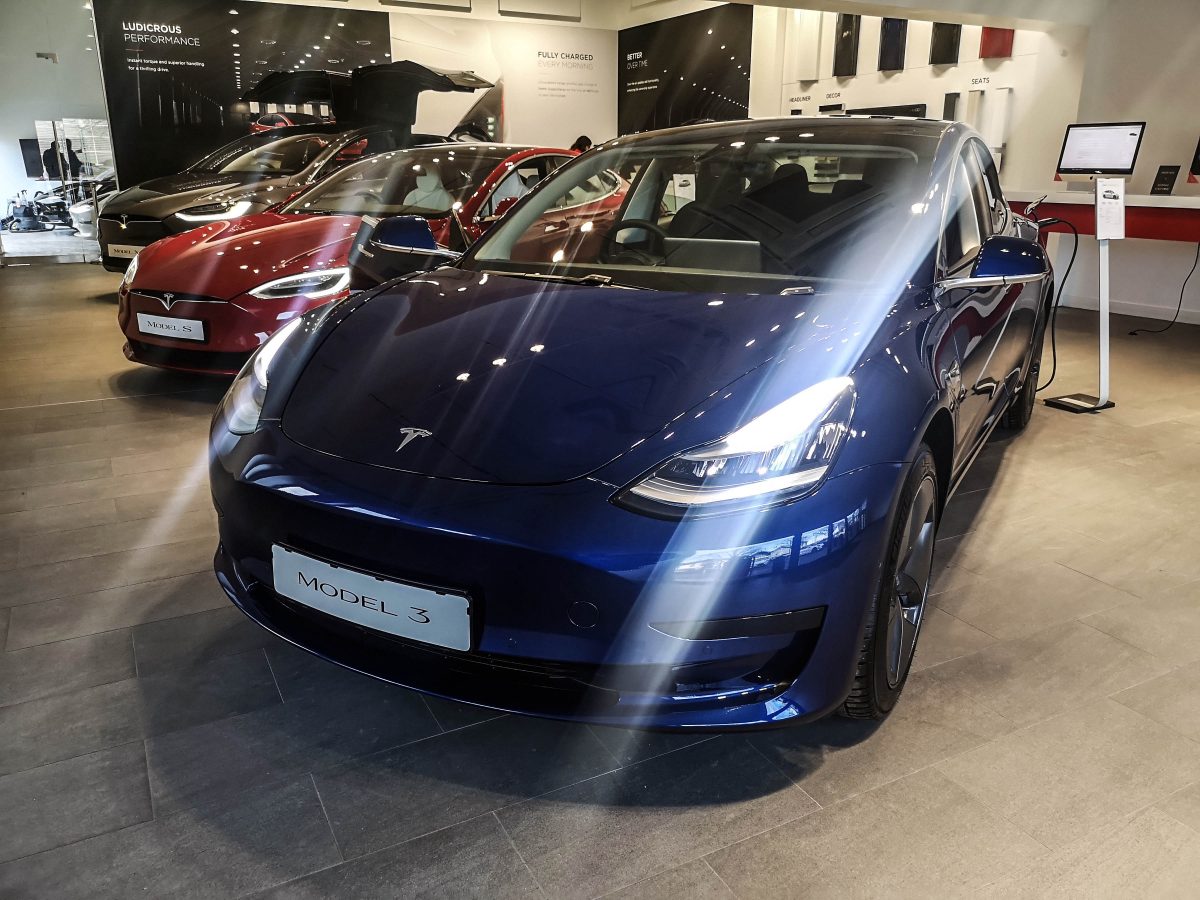 Electric cars are still in the ‘love to knock’ bracket but sales for the next generation of motoring are rising in big numbers.

Tesla is the biggest selling all electric car for 2019 in Europe, selling over 22,000 of their base car, the Tesla Model 3, last year. They have sold more than all cars in the next nine places of the top 10, which include the biggest household motoring manufacturer names.

So over the weekend on a trip to Dublin I went in search of this new European market leader which has only one outlet for all of the Republic of Ireland based in South Dublin in Sandyford.

The Tesla Dealership showroom has only room for three cars, in it the model X, the model S and the entry model into the range and newcomer the Model 3 all sitting in the showroom and all plugged into three electric power point pillars. 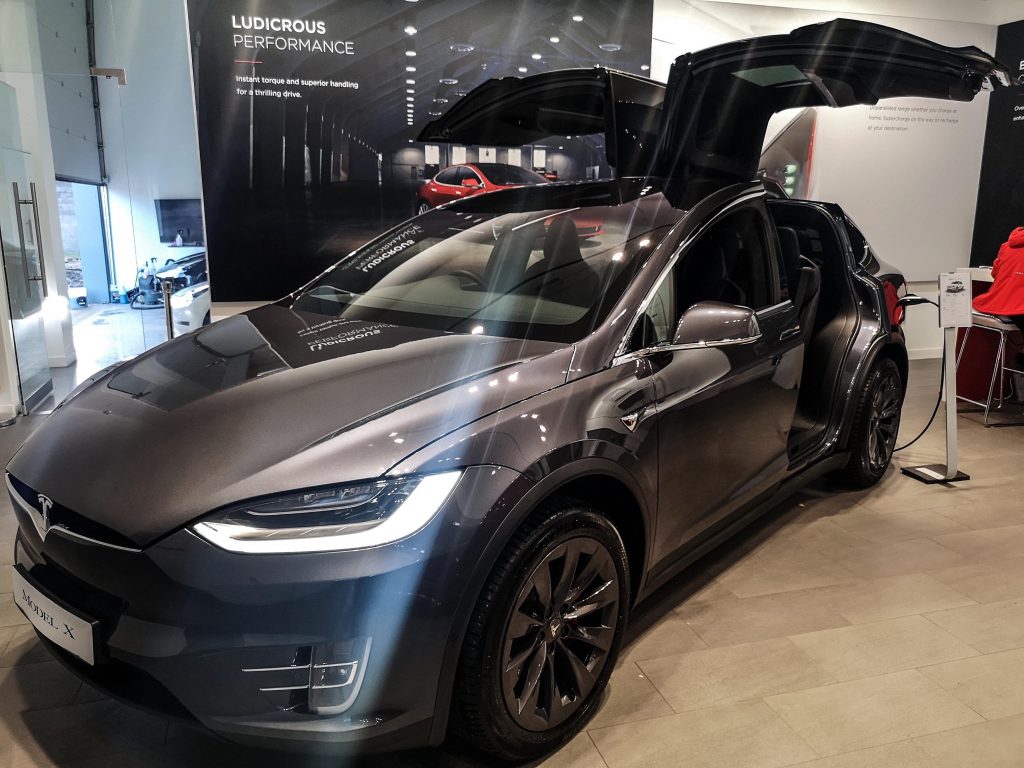 It’s not long before one of the sales team makes their way over to help with any questions, the cheapest Tesla in this showroom will set you back €47,000 and that’s the base model 3.

It’s very hard to tell the difference in one of these at €47k and one that looks the exactly the same at €67k.

The Tesla Model 3 looks like the size of a BMW 3 series but has more of the look of a Porsche possibly because how low the electric power plant sits in the front of this and all of the Tesla range. Mind you when you pop the bonnet on one of these it will show you nothing of what actually makes this well appointed car tick. Its all covered up now with no sign of the workings anywhere, there’s room for a suitcase in under the bonnet which looks more like a boot, only the top of the window washer bottle lid is the only part of any kind of workings of the car that is shown,  everything else sits covered up deep in the body of the car. 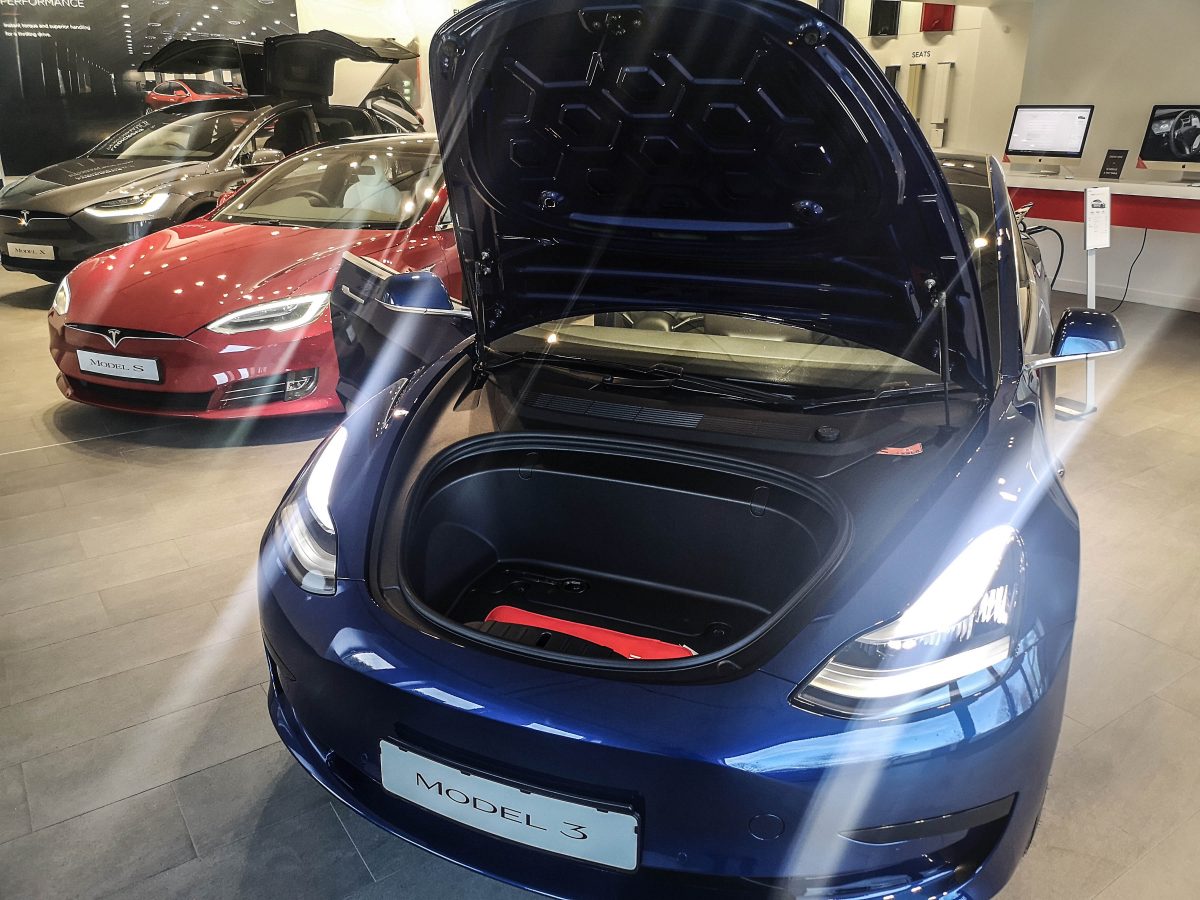 Looking under the bonnet of the new Tesla Model 3 which looks more like a boot with space for luggage. Photo Brian McDaid.

Inside the car a simple piece of wooden board goes across beneath the front windscreen on the driver side there’s the steering wheel and other than a square screen sticking up in the middle and that is sitting behind the wheel. I found it odd to have nothing other than the steering wheel sitting on front of you, not even a gear stick to put the car into drive that’s now where the indicator stalk would normally be on an ordinary car. 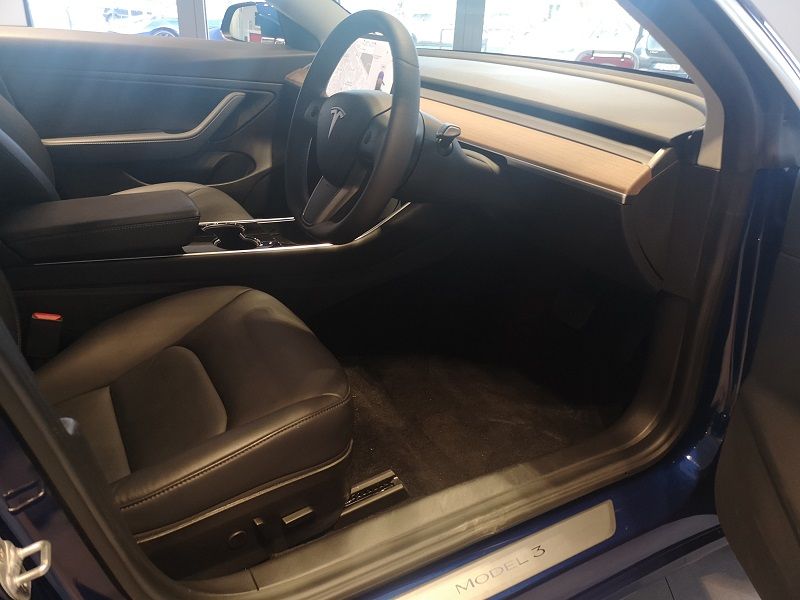 Looking inside the Mode 3 Tesla with the dash that looks like no other cars’. Photo Brian McDaid. 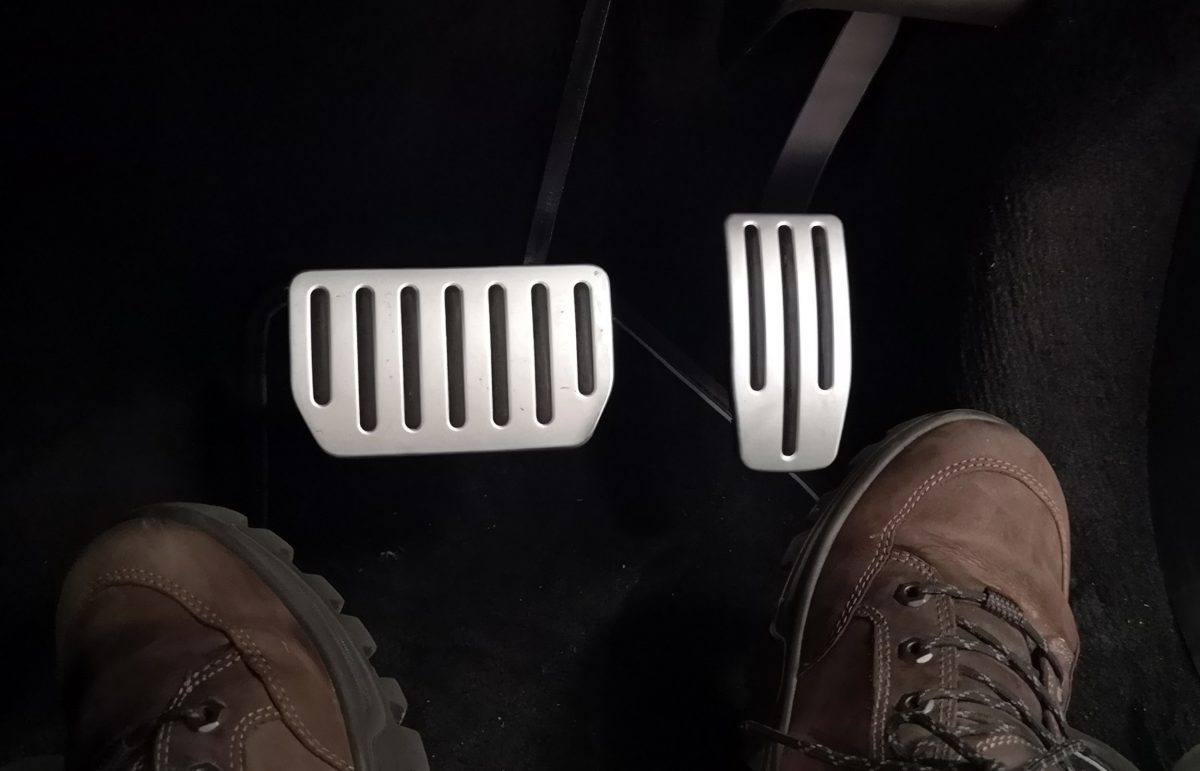 The polished brake and throttle on the Tesla Model 3. Photo Brian McDaid.

The driving position is excellent with a big brake and throttle paddle made out of polished and slotted aluminium. Everything else in this car seems to be controlled or monitored through the square screen in the middle of the dash.

Even though there is a very minimal feel to the Model 3 Tesla everything has a very high level of finish to it, The quirky exterior door handles would remind you of the old indicators that came on the very first Morris Minor which would pop out on the B-Post 70 years ago. 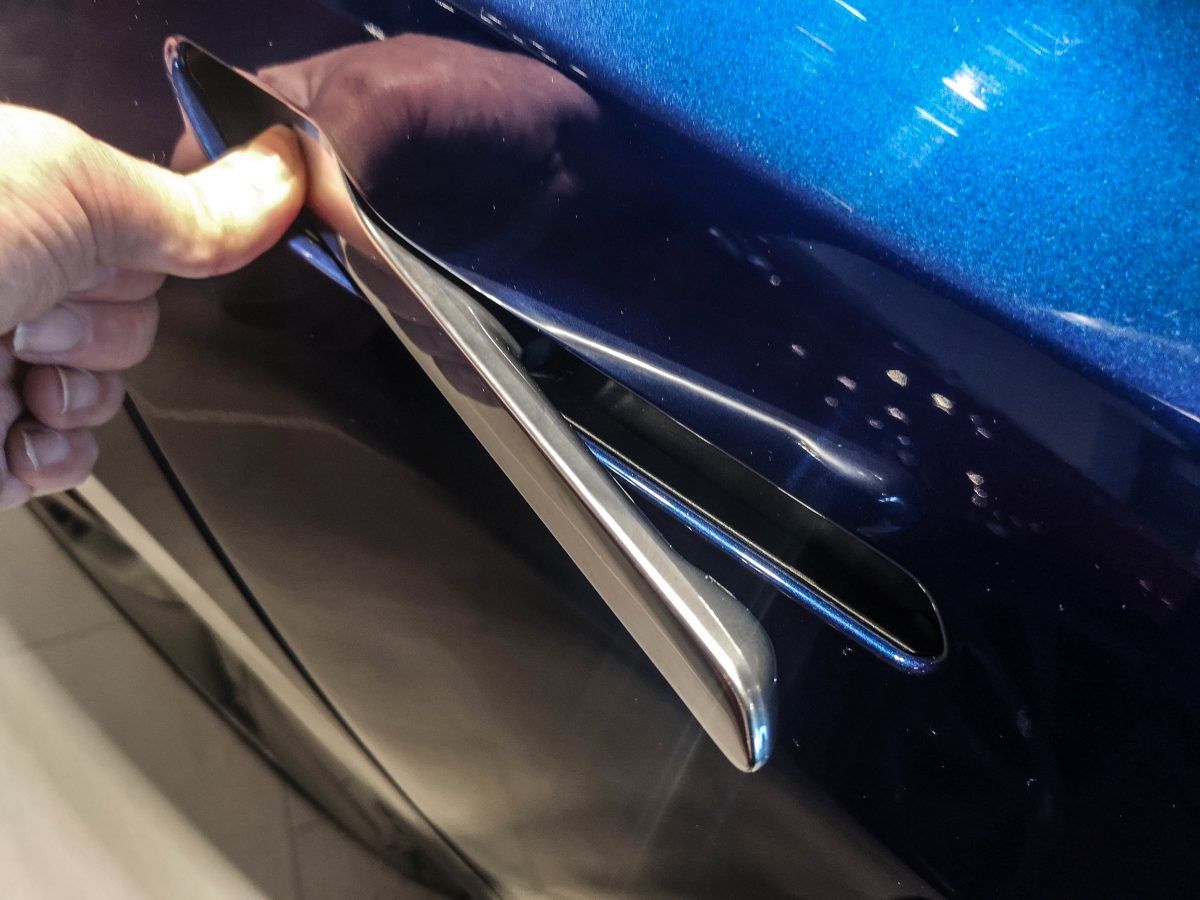 A view of the classic door handles on the new Tesla Model 3. Photo Brian McDaid.

One the models,  X there’s a feeling of The old De Leoran made in Northern Ireland with the gull-wing doors which first appeared on the 300 Mercedes in the 1950s, Tesla have upgraded the door name gull-wing to falcon-wing which are very impressive which open up to show a very roomy three row of double seats room for six. The glass roof on this looks amazing with small dainty sun visors that fold away to the side above the drivers and passengers doors.

It doesn’t take long looking through the figures for the 3 Tesla electric cars on show and  available in Ireland that a time of under 3 seconds for the top of the range model S to go from O to 100 kilometres per hour is what draws people to talk and dream about Tesla. While everyone was looking for faults in the electric and hybrid cars that put efficiency first on the list for the green motoring of the future, Tesla looked at the green requirement and produced electric cars and then went one step further and made them the fastest production cars on the planet. 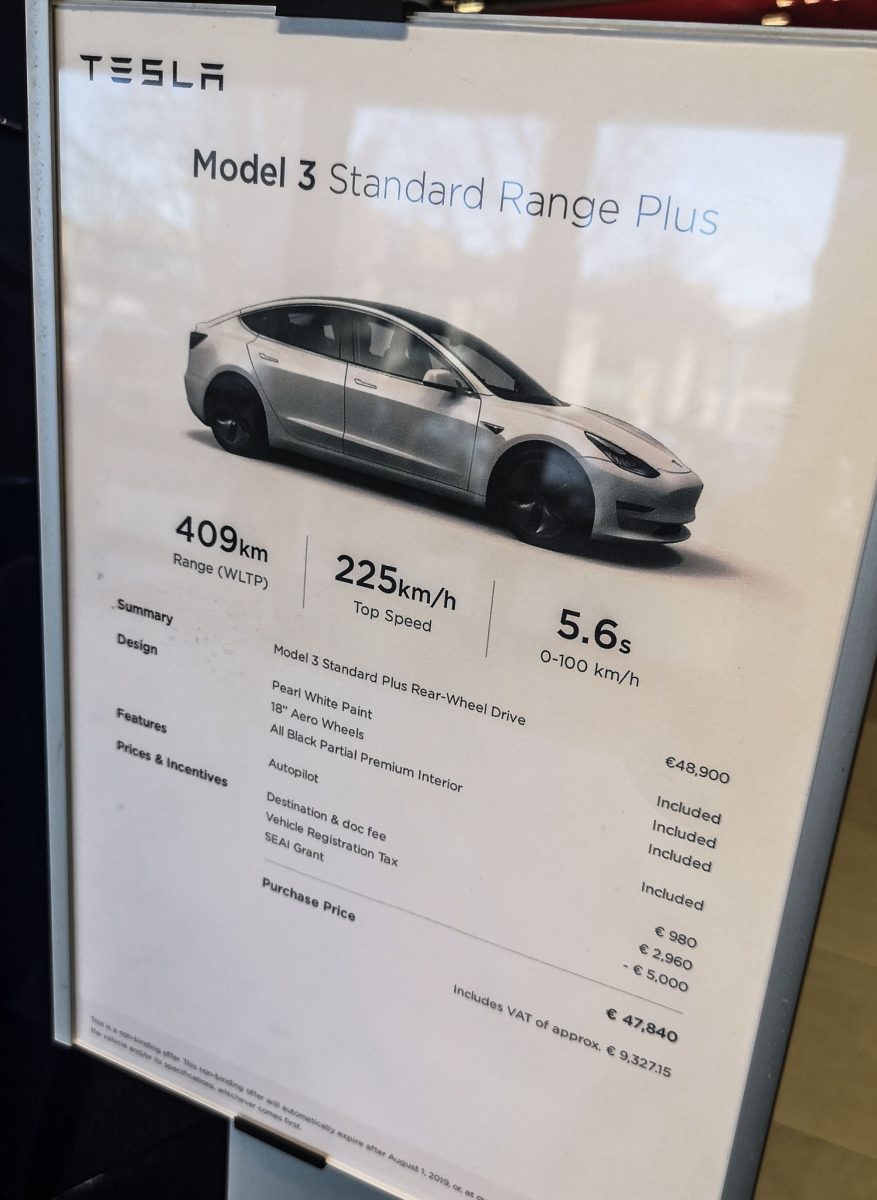 Window shopping with a difference looking at the prices of the Tesla range at their showroom in Sandyford. Photo Brian McDaid.

More people today, some of which can’t even drive themselves yet, can tell you everything about the Tesla car and its capabilities.

Tesla don’t give you the power output  in brake horsepower but rather give you the distance range of battery some of which are the longest available of any car on the road.

The twin electric motors which supply the four wheel drive on a top of the range Tesla pump out a jaw dropping 794 brake horse power combined there isn’t much that is green about that which would beg to ask the question that the electric Tesla might be heavier on fuel than the petrol version is supposed to be replacing but with being emission-free. 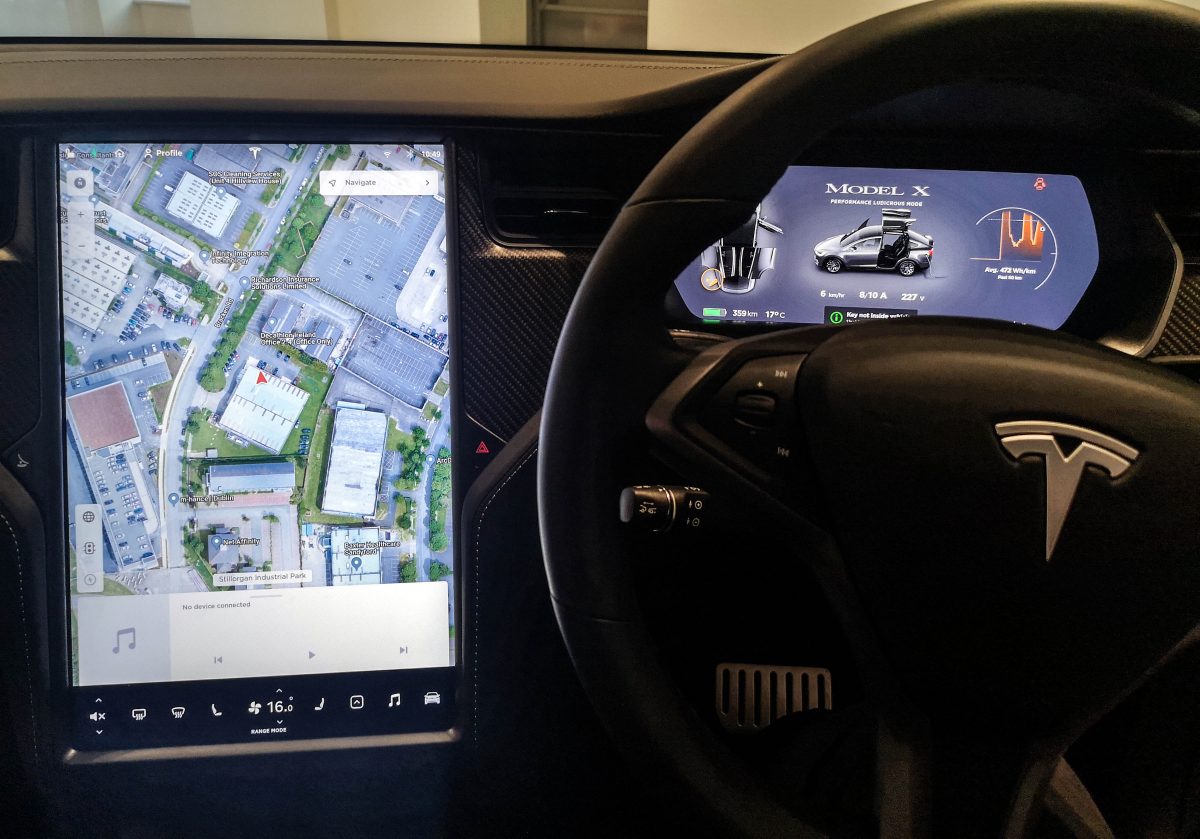 You are here. Inside the Tesla Model X in the showrooms in Dublin. Photo Brian McDaid.

The best way I can get my head around Tesla’s success feels similar to the way Apple made their way into the phone business, back in the day I thought there was nothing like the Nokia 6110, the build proof in their day made them the market leader. Then Apple came along and changed all that. Years after I reluctantly made the change from Nokia to Apple I realised that Apple never really invented anything on the phone they made, they just made what was invented before they came along even  better, and also made it more difficult for us humans to make any after market adjustments to their phones like fitting bigger batteries. Now Tesla from the limited view of the company that I have seen so far have done the same, they haven’t invented the car, they haven’t invented the electric motor they haven’t invented the trade mark falcon-wing doors on the Model X. 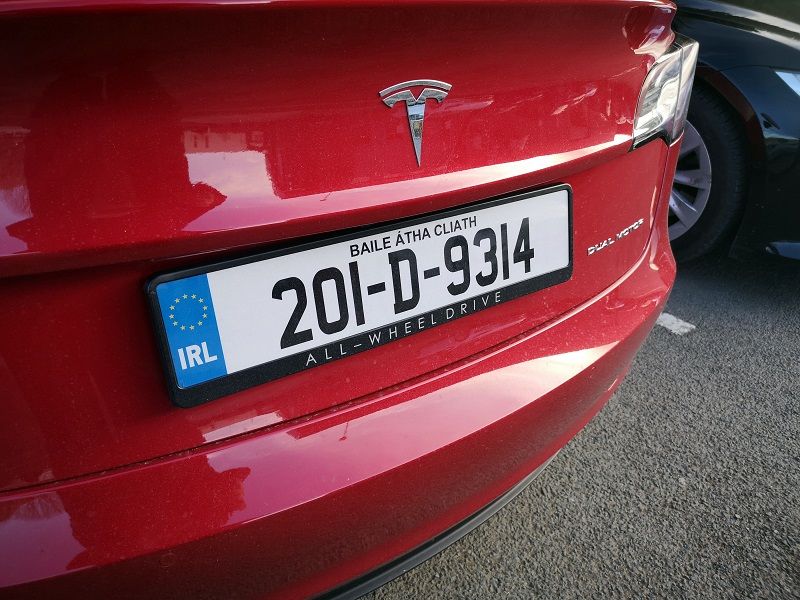 The all wheel drive Tesla ready to roll at the showrooms in Dublin this week. Photo Brian McDaid.

What Tesla have done is produced a top drawer version of a family car that makes you feel that they have invented the change that future motoring will be required to move into rather than the feeling forced to move.

People who love their car and everything about them felt forced with the change to electric.

Tesla also capitalised on one of the big benefits of an electric motor over a combustion engine, that of instant torque to produce electric cars with attitude. Gone are the days when a Beamer or a Merc parked up or driving down the road will turns heads as much as a Tesla will do. It’s cars like the Tesla that have created the dream long before anyone has ever seen a Tesla in real life, that have made these cars so talked about.