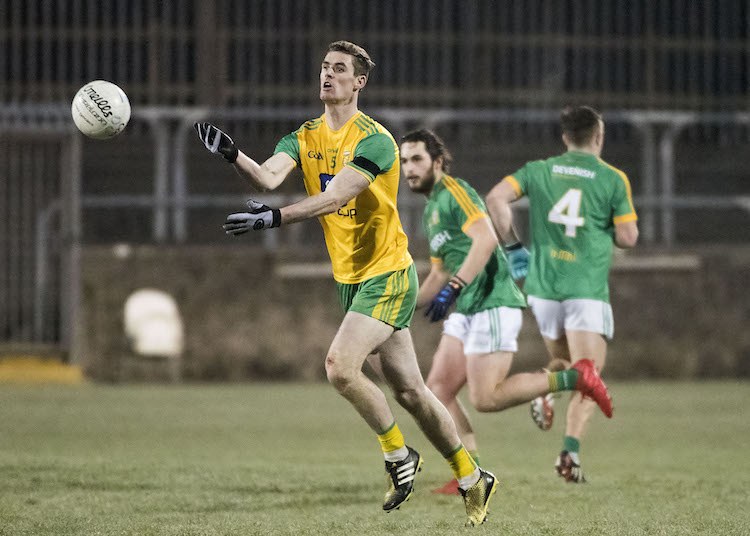 The St Eunan’s man, who played in last Saturday’s draw against Mayo in Ballybofey, says the new rule can leave defenders ‘hanging out’.

The opening weekend of the League didn’t meet the ‘mark’ with great approval, even if it wasn’t a big feature in games. There was just one in the Donegal-Mayo game, with Michael Murphy taking a point after he came out to catch a routine pass on the goal-side of the ’45.

It was the perfect example of why Ward is against it.

“As a defender, you’re thinking that that’s the best place for a forward to win it, running away from goal, and there isn’t much immediate danger,” Ward explained this week.

“The fact that you get a shot on goal now just doesn’t make it easy for a defender. Do you commit too much or do you back off? You’re stuck in the middle somewhere.

“If you can get out, pressure them, maybe the kick in won’t be as good. You just have to look at what the scenario is when you’re in the game and try to best judge it. It’s a thing that no-one is happy with and there is talk about it in every game.

“I don’t know if there is any sense making any noise about it. They just seem to do what they want. We just do what we’re told and follow the rules.”

For Mayo’s opening goal, netted by James Carr, the referee signalled for a mark, but the Mayo forward opted to play on.

Ward is quite strong on his views.

“It hangs you out to dry a small bit.  You’re essentially giving up a possible score or in other situations you might be able to slow him up or make contact and get a turnover. Now, it’s a free shot. I don’t like it from a defender’s point of view.

“If we can use it ourselves attacking-wise, you’d be all for it, but it’s not something that’s needed.”

Ward and Donegal return to action on Sunday when they face Meath in Navan, where they’ll aim to grab the win that eluded them at the death on Saturday night. A James Durcan goal, seven-and-a-half minutes into added time, denied Donegal.

Ward said: “Every game and every point you take. We’re delighted we got one point, but disappointed that we didn’t get two. It would have been lovely for the group to come out with a win, but it wasn’t to be.”