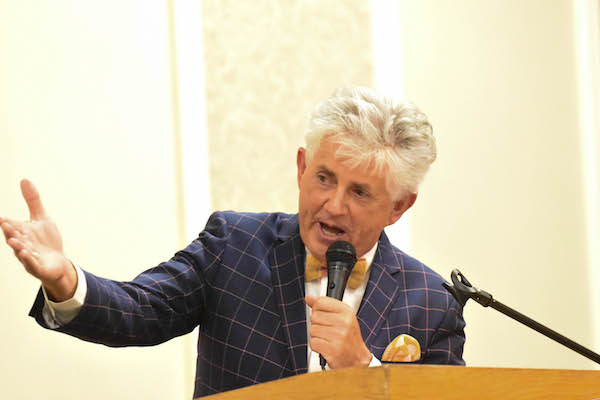 Noel Cunningham is Donegal Person of the Year

Noel Cunningham has been named the Donegal Person of the Year for 2019.

The announcement was made tonight, Friday, in The Black Door Piano Bar on Harcourt Street in Dublin.

Noel spoke of his joy at being given the award and what he hopes to achieve in the year ahead.

In a open and emotional acceptance of his award, the popular hotelier spoke about his truly colourful life including his battle with alcohol, his sexuality, faith, traveling the world and finding happiness in his native Donegal.

He said “Who would have thought many years ago when attending the function in the Gresham Hotel, where my Uncle Willie Joe Cunningham was honoured with Donegal Person of the Year that all these years later I am to be the recipient of the same honour?

“In many ways that little bit of history makes this award all the more special. Words cannot describe my sense of pride that I shall carry this title … so richly associated with my beloved county.

“It is also interesting that The Arranmore Disaster, a terrible tragedy from which the Association was born has always been something that has influenced me. It was the sheer magnitude of this disaster and the cruel hand of history and the struggle for survival and the hardships endured by our people that were brought into sharp relief by this tragedy.

“I made a pilgrimage to this beautiful island last summer and connected spiritually with that struggle and the story and it had a lasting effect on me.

“In looking back then it also very clearly shows us how we have moved on in every way from those darker difficult days and now our beloved County is standing proud as a destination for tourism, culture, music, song, industry and has a young population who will face the challenges of tomorrow with pride and gusto.

“Donegal is on the cusp of further greatness and that is what we all have to contribute to.

“The fifties in Donegal were a different time. This was the decade I was born into … in Kilcar … son of Catherine and Jim Cunningham with five siblings making up the eventual size of the family to six children and our Parents.

“It was a happy, carefree life of money being scarce yet we had a self-sufficiency  from farming and growing our own potatoes and vegetables. School was Fintra National School followed by Derrylaghen National School. Afterwards, it was the Technical School in Carrick until I went south to Rockwell College in Tipperary to do my Leaving Certificate and also a hotel course.”

He worked mainly in London and became the youngest General Manager with T.H.F. In between different postings. He took a leave of absence and travelled a lot working on cruise ships, P&O and Cunard and saw the world.

He added “I met interesting and wonderful people and dined with paupers and princes. All had their story to tell and looking back I certainly was one of the few young fellows from Donegal to have seen the four corners of the world.

“I alluded to a different and less tolerant Ireland. I realised from very young that I was gay and true to the times I lived a lie. My sensitivity and I suppose gentle nature led to bullying and a fairly unhappy life in general. This bullying and victimisation extended to all aspects of my life and it was not a happy time. This indirectly led to my life going off kilter for a period. Alcohol became my friend and I was soon a full-blown alcoholic.

“In the middle of all this turmoil another great tragedy befell my family. My beloved sister Marie and her husband Donal were tragically killed in Donegal. They had three children so our lives were to change completely.

“I returned to Donegal and thanks to prayer and a wonderful moment of honesty from my niece who had lost her parents, my life took a turn for the better. I thank my sister for her intervention from above and I began the long road back to a life that was in the words of alcoholics anonymous, ‘a life beyond my wildest dreams.’

“My friend Hugh O’Donnell offered me a job and I happily managed Kitty Kellys for thirteen years. I had stopped drinking and to this day over twenty years later I am happily sober. I yearned for my old hotel career and when Deirdre Mc Glone asked me to join Harvey’s Point I did so with a song in my heart. Ten years later I am still here happily flying the flag for Donegal and Tourism.

“My days of alcoholism taught me many lessons in hindsight. The greatest of these is gratitude and giving back. I am actively involved with my community and with various charities.

“My Donegal … family, friends, community and the beauty of hills, mountains, sea and valley have been my healing. My gratitude is to forever sing that song ‘My Donegal’ in thanks for what it means to me, it is my heart and soul, my life, my joy and my everything.

“As Donegal Person of the Year 2019 I will most certainly devote my time to do what I always do and that is to promote my County far and near. Added to this I am making a commitment to a personal project for young people in schools and colleges on a theme of Inclusion and Tolerance. It is at an early planning stage but I wish to give something back that is tangible and relevant in the times we live in.

“I want to be remembered as someone who championed and encouraged our great young people to live better lives and to live that life with a better acceptance for all.’