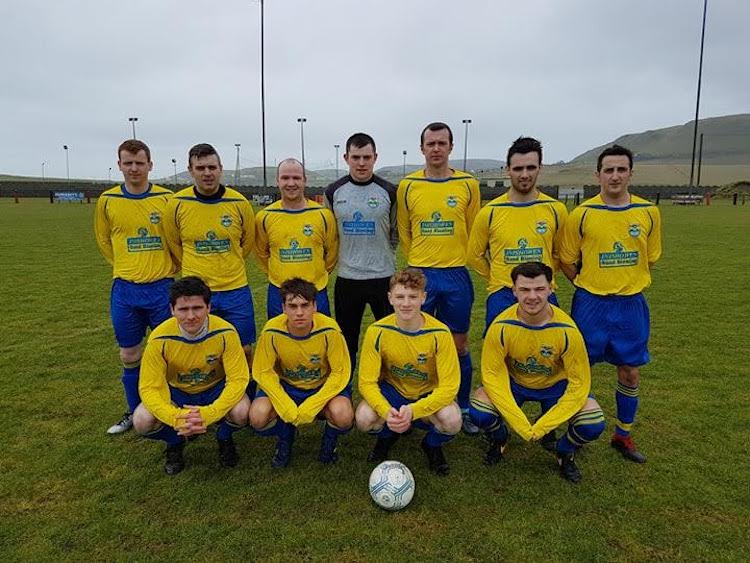 Inishowen League – Aileach stretch their lead at the top

AILEACH are four points clear at the top of the Jackie Crossan Premier Division after today’s action in Inishowen.

Ailach overcame Illies Celtic 4-1 at The Lakeside while Glengad were held to a draw by bottom-of-the-table Culdaff at The Crua.

Bottom of the table Culdaff caused a huge upset and put a dent in the home side’s title challenge with this hard-fought draw.

Glengad started the better and on 10 minutes Seamus Doherty sent Terence Doherty clear but he fired wide. Culdaff responded and when Darren Mullarkey found Eugene McLaughlin on the left he failed to trouble Daniel Mullarkey in the home goal.

Glengad got on top then with Finn McClure seeing an effort well saved by Darragh McLaughlin before Seamus Doherty had a shot brilliantly tipped around the post by Mclaughlin.

On 40 minutes Terence Doherty ran onto Patrick McDermott’s pass and saw his first time effort cleared off the line by Damien Harkin who picked up an injury in the process and had to be replaced.

A minute before the break the home side were awarded a penalty after Terence Doherty was upended and James McKinney despatched the kick low past McLaughlin.

Glengad had a good chance after the break when Doherty raced clear but fired wide when well placed. Despite a lot of possession Glengad were restricted to long range shots with Seamus Doherty seeing an effort saved.

Culdaff lifted the pressure on 72 minutes after a Eugene McLaughlin cross found Bryan McCandless, but he fired wide at the back post.

The visitors got a shock equaliser on 77 minutes when Michael Coyle pounced on a defensive slip and turned a defender before finishing superbly low past Mullarkey.

The home side threw men forward but were restricted to long range efforts from McClure, Matthew Byrne and Conor Barrow which were all off target as the visitors defence stood firm to claim a surprise point.

Aileach started at a high tempo and were ahead within five minutes when Darren McMonagle got space on the edge of the box and curled a left-foot strike beyond the dive of Johnny Noone.

The home side were on top at this stage and Noone did well to deny both Darren McMonagle and Gavin Doherty in quick succession to keep his side in the game.

Illies began to settle after the initial onslaught and played some good football to get a foothold in the game. Their good spell reaped rewards on 20 minutes when Liam Grant overlapped down the left and crossed for Liam Doherty to volley home at the back post.

On the half hour Gavin Doherty was played in by Darren McMonagle but he rushed his finish, failing to trouble Noone. The away side were giving as good as they got and Adrian Donaghy Doherty was working tirelessly up front giving the Aileach rearguard all sorts of problems.

The second half opened with Aileach upping the pace again and had the away side pinned in for long periods.

On the hour Darren McMonagle played in Gareth McGlynn but he skied his effort well over Noone’s bar. The home sides pressure finally told on the hour when the same two players combined but this time McGlynn slotted home low past Noone.

A third goal arrived on 70 minutes when Thomas McMonagle found Dermot Doherty on the edge of the  box and he clipped a lovely effort to the top corner past Noone’s right hand.

With the young Illies side tiring Aileach rounded off the scoring in the  83rd  minute  when Gareth McGlynn was fouled in the box and Darren McMonagle sent Johnny Noone the wrong way from the spot.