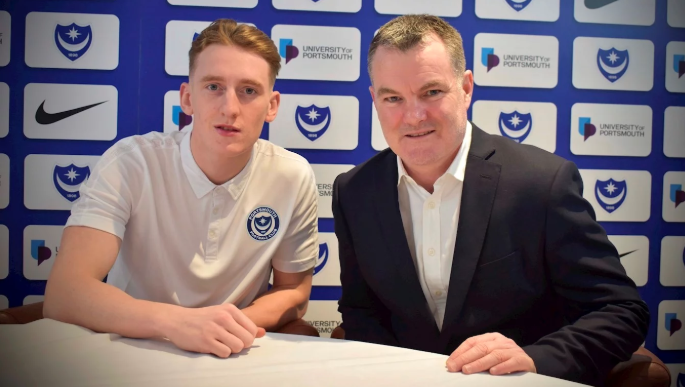 RONAN Curtis’ sensational form at Portsmouth has been rewarded with a new contract.

The St Johnston man has signed a new three-and-a-half-year deal at Fratton Park.

Curtis is Portsmouth’s top scorer with 13 goals this season. Ten of those goals have arrived in his last 16 outings.

Now, he’s aiming for promotion to the Championship,

“I love this club to pieces and I couldn’t really wish for anything better, so I’m over the moon to sign a new contract,” Curtis said.

“Kenny, Joe and the rest of the staff have gave me a chance by bringing me here and I wanted to repay them by staying loyal, while the fans are great.

“The group of lads we’ve got all get on like a house on fire and we all want to win promotion with Pompey.

“The supporters are right behind us and with the players and staff here, we’re confident that can happen.

“We weren’t playing to our standards at the start of the season, but now we’re picking up lots of points and want to make sure that continues.”

A 2-0 win over Sunderland yesterday – when Curtis assisted both goals – put Portsmouth into the play-off spots.

Curtis, who has already been capped by the Republic of Ireland, was name-checked again recently by Irish boss Mick McCarthy.

Curtis is firmly back on form again. He said: “There was a lack of confidence and I knew that once the first came along, more would follow on from that.

“Now I seem to be scoring every game or two and hopefully that can continue. I’m playing regularly and happy to help the boys.”

After signing from Derry City in the summer of 2018, the former Kildrum Tigers underage starlet scored 12 goals in 49 appearances last season and Blues boss Kenny Jackett is delighted to keep his man.

Curtis had drawn attention from several clubs and Jackett said: “We’re all delighted that Ronan has signed a new contract and it shows the progress that we’re making.

“He’s made such a big impression in his first season-and-a-half at Pompey since arriving here from Ireland.”