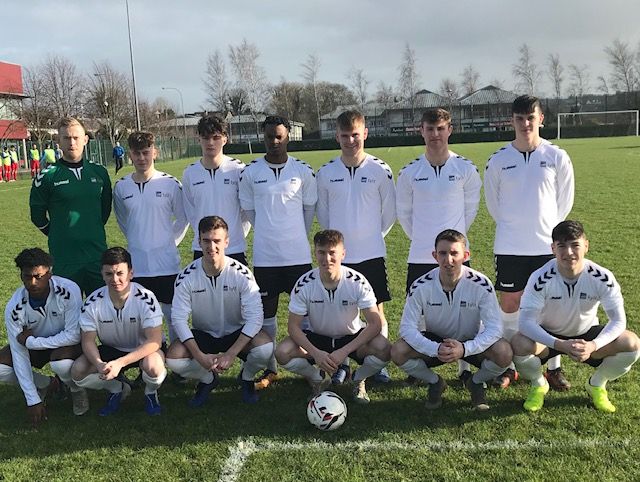 IT Sligo fightback to deny LyIT a semi-final spot

SUBSTITUTE Darren Collins’ extra-time winning goal completed a super comeback for Sligo IT as they battled back from 2-0 down to overcome LyIT.

Letterkenny Institute of Technology 2 IT Sligo 3 (after extra time)

By Charlie Collins at LyIT

IT Sligo fought from two behind in the opening half-hour to book a place in the semi-finals of the Umbro Cup.

The home side will be disappointed that they couldn’t push on after that great start but the visitors are having an excellent season and showed just why with this impressive and resilient performance at the Port Road venue.

The home team got the perfect start with a goal in the sixth minute. Conor Gormley’s strong header forward found BJ Banda and when he crossed into the penalty area Cory McBride reacted quickest and drilled the ball low into the corner.

IT Sligo were taking time to settle into their game and were 2-0 on the half-hour. Banda was again involved as he flicked on Sean McBride’s fine pass and Pat Loughrey racd onto the ball and fired a cracker into the far corner from 16 yards.

To their credit IT Sligo didn’t let their heads drop and in injury time at the end of the half they pulled a goal back .

Gary Higgins had burst into the LyIT box and Kieran Farren’s tackle was deemed a foul by Referee Michael Connelly who pointed to the penalty spot. There were no complaints and the impressive Brian Kavanagh confidently blasted the ball to the net to leave it 2-1 at the break.

It was 2-2 in the 53rd minute. Aa Sligo free-kick was headed clear initially but quickly returned into the box, Jeremiah Idahor headed goal-wards and in his attempt to intercept, Gormley headed past his goalkeeper Jamie Bell and the sides were level.

The visitors now had the bite between their teeth and pushed on looking for a winning goal.

Bell did well to deny both Idahor and Ben Treanor’s header and James McGrath saw his 20 yard denied by the post.

The home side could have won it in the 88th minute when McBride delivered a super low cross from the right but sub Gaby Aduaka seemed to slip slightly and couldn’t get his shot for what looked a great opportunity.

And so we went to extra-time and in the first-period IT Sligo clinched it. Goalkeeper and Donegal native Jason Quinn produced a super save to deny Aduaka and then grabbed the resulting corner above his head.

His quick released and long ball caught the home defence square and sub Collins nipped in to score what proved to be the winning goal.

LyIT pushed hard in an attempt to send it top a penalty shoot-out but Quinn and his defenders stood tall and held on for this derby victory.