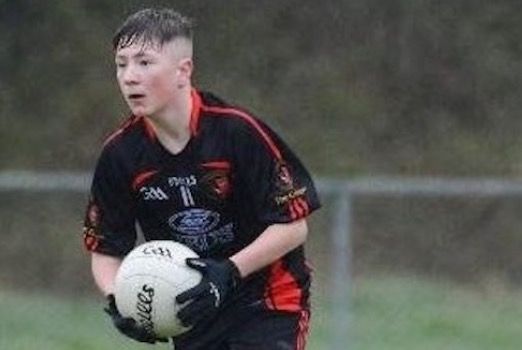 THE St Michael’s GAA club has paid a moving tribute to the late Callum Friel.

The 17-year-old, who passed away on Friday last following a battle with illness, was laid to rest on Monday.

A fifth-year student at St Eunan’s College in Letterkenny, Callum was a talented sportsman who played with St Michael’s and had also represented his school and he played soccer with Dunfanaghy Town, while he also played badminton.

On Monday, after Funeral Mass in Creeslough, Callum was taken to The Bridge one last, poignant time before his burial in Doe Cemetery.

“Everyone in St. Michael’s GAA Club were shocked and saddened on Friday last on hearing of the sad passing of our player Callum Friel in St. James’s Hospital in Dublin.

Callum passed away in the arms of his loving family after a brave battle with a long illness.

Callum was a talented footballer who represented the Naomh Micheál Club at underage level and made the number 9 jersey his own. He was a proud Bridgeman and after his Mass in St. Michael’s Church in Creeslough on Monday last his family brought Callum back to his beloved Bridge Park for one last visit before his burial in Doe Cemetery.

All club activities have been cancelled this weekend including the bingo.  The flags flew at half mast at the club grounds.

Callum was a student of St. Eunans College in Letterkenny where he played and captained the school team. A prayer service was held in the college on Saturday last.

Callum was also an all-round sports man and as well as playing GAA he also played badminton for Dunfanaghy and Donegal and Soccer for Dunfanaghy Youths and the Donegal Schoolboys League.

The esteem in which he was held was evident in the numbers attending his wake and Funeral Mass in St. Michael’s Church in Creeslough on Monday last with Guards of Honour being provided by members of St. Michael’s, his fellow students and teammates from St. Eunans College as well as students from PCC Falcarragh and Loreto Convent in Letterkenny, and Faugher NS where he was a past pupil and members of Dunfanaghy Badminton Club.