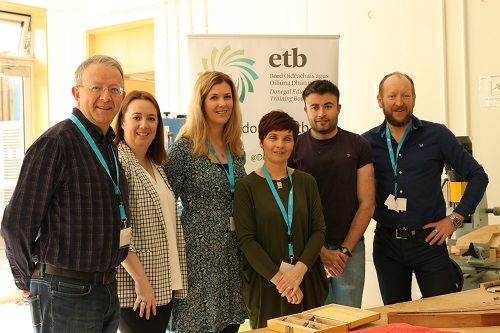 Donegal ETB to feature in ‘Creative Company’ on TG4

Donegal ETB will feature in this week’s episode of ‘Creative Company’ which airs on TG4 this Thursday night, February 6, at 9.30pm.

They are one of ten teams, including two from County Donegal, taking part in this arts-based entertainment show which has embarked on a mission to find Ireland’s most creative workplace.

Involving ten companies and organisations from across the country, Creative Company pairs each with an accomplished Irish artist, throughout the entire process – working with the companies involved will be Dublin based painter Bríd Higgins Ní Chinnéide and Liam de Frinse, an award-winning multidisciplinary artist from Belfast.

Donegal ETB is represented by a team of six staff from across the organisation.

The winning company will not only claim the title of Ireland’s most creative company, but their artwork will be put on public display in Dublin’s CHQ at the heart of Dublin’s business district for a period of three months.

Last week, Donegal Yarns made it through to the final which airs next week, on Thursday 13 February. Will Donegal ETB make it through this week? Tune into TG4 this Thursday, 6th February, at 9.30pm to find out how Donegal ETB’s team gets on.