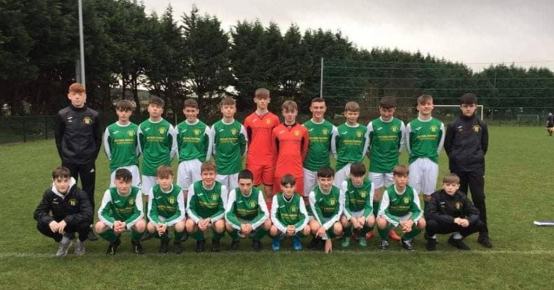 DONEGAL Schoolboys U15s travel to Drogheda on Saturday for the SFAI Subway National Championship semi-final with a place in the final against either Cork or Galway up for grabs.

Donegal topped their regional group and defeated Inishowen last month in the Ulster final in Ballyare by a convincing scoreline of 6-1.

“Any team that comes out of the Leinster section is going to be strong and it will be a difficult challenge but these group of boys have surprised us at every turn so far since we got together last August,” Fox said.

“We played Derry City’s U15 League of Ireland side at the weekend and although we lost 3-2 we took so many positives from the game and it sets us up nicely for the weekend.

“We don’t know too much about Drogheda but like Inishowen they have the nucleus of the squad from last years Kennedy Cup tournament in Limerick so they will have been together for quite some time and I have heard their squad has representation from only four clubs so again that adds to their strength. “

Assisted by Kyle Maloney and Garry Gibson, the squad meet up every Sunday for between 2-4 hours depending on match schedule. Tony Blake has done goalkeeping sessions with Cormac Hanlon and Mark Margey while Shaun Gallagher has done some core and agility work with the group and they also have a programme to do at home.

Fox said: “The commitment from the boys from day one has been immense. Some of them were very disappointed to miss out on selection for Finn Harps and Derry’s League of Ireland U15 squads but it means the quality of our squad has been good and they are keen to learn and improve.

“Sometimes people can forget these boys are still only children and they will all develop at different stages. Its up to us as coaches to try and nurture that and help them along their journey wherever that may take them.

“The U13s are down in Clare in another semi-final this weekend so it shows the quality of player in the county is still there and some clubs are doing brilliant work when you see the players coming through.”

The U15s kick off at 2pm at Drogheda Institute on Saturday and the winner will go to Mullingar for the final on the weekend of February 23.