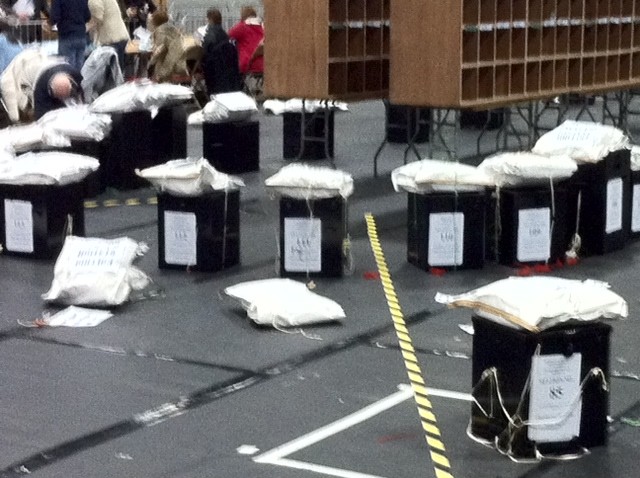 As the clock ticks down to the General Election on Saturday, the Tirconaill Tribune opinion poll for Donegal suggests that Sinn Fein is in a clear lead that should see their two candidates elected in the early stages of Sunday’s count.

The electorate for the constituency is 125,911 and based on previous turnouts the quota may be just short of 13,000 with an additional 8,286 names on the register since 2016.

The Tribune poll included over 1,400 participants and was conducted between January 24th and 31st and people’s opinions were sought in sixty locations across Donegal’s five municipal districts. 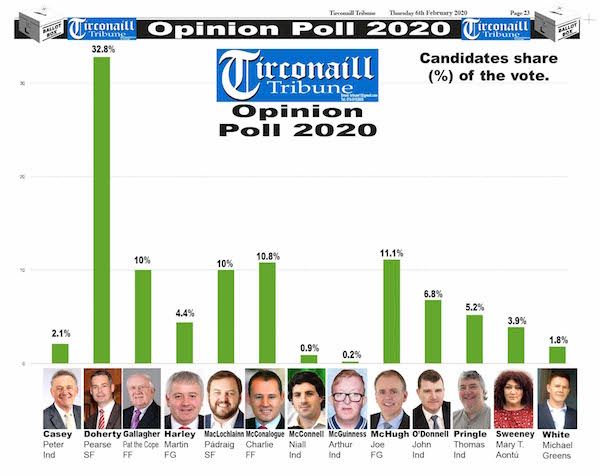 In effect, the poll is showing that Sinn Fein has a larger share of the vote than the combined totals for the other four outgoing TDs.

His party colleague Padraig MacLochlainn polled 7.83% last time: he has increased to 10% which is 3.17% extra.

Fianna Fail’s Charlie McConalogue topped the poll last time on the first count taking a share of 17.10%: the poll shows his total has now been cut to 10.8% which is a decrease of 8.3%.

The Leas Cheann Comhairle, Deputy Pat the Cope Gallagher got 13.91% at the last election: the opinion poll shows a reduction of 3.91%.

Last time, FG’s second candidate, Paddy Harte polled 3.86% – this time, Cllr. Martin Harley is on the ticket and he is showing at 4.4%. His vote is predominantly in the Stranorlar-Lifford area with 17.2% of the district share while in Donegal Town he is running at 6.2%.

Deputy Thomas Pringle got a first preference share of 8.49% last time and was elected by the most slender of margins defeating Mac Lochlainn by 184 votes on the final count. The Tribune poll shows him on 5.2% (TG4’s poll gave him 6%). 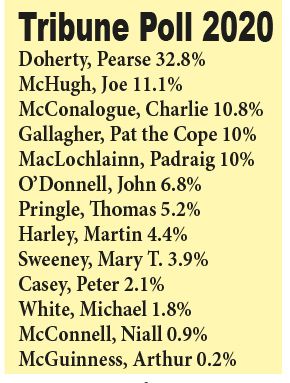 Across the county, Sinn Fein has a strong lead in each of the five municipal districts. In Letterkenny-Milford they have 36.1%: Inishowen gives them 48.%: in Glenties they are polling at 45.7%: in Lifford-Stranorlar their share is 51.7% and in Donegal Town the poll puts them on 46.5%.

The SF total is close to the TG4 poll on January 22nd that gave them a share of 39%. But in the meantime, the party support nationally has risen by 6%.

With the Tribune poll being finalised a week before polling day, it showed SF increasing its share of the vote by 15.52% since the last general election.

Pearse Doherty is the man of the moment: he is set to top the poll with a first preference share of 32.8%.

His surplus vote will ensure that Padraig MacLochlainn will take the second seat, despite getting a 10% first preference share in the poll.

Mary T. Sweeney, the Aontu candidate is running at 3.9% while the Green Party candidate, Michael White is on 1.8%.

The Independent vote is a significant figure of 15.2% but is down 10.36% in four years with three fewer candidates in the field.

Independent Cllr. John O’Donnell is on a share of 6.8% in the poll. He will expect that preference to keep him in the count to stay in contention into the final stages of the count.

O’Donnell is likely to draw a large share of his vote from the Letterkenny Municipal District. At the local elections in the Milford area last May he topped the poll on 1,957 first preferences to give him a 25% share. The poll pattern for the Letterkenny-Milford area is interesting. 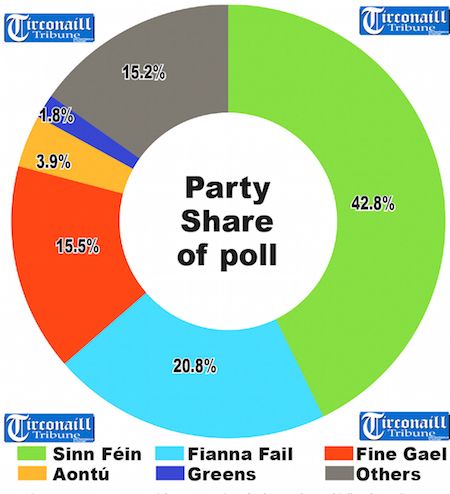 With Sinn Fein dominating in the Tribune Poll, it seems most likely the distribution of Pearse Doherty surplus votes will have a very big input for all other candidates and the destination of the three remaining seats.

On January 23rd., TG4 in its ‘Vóta 2020’ programme in conjunction with Ipsos MRBI published the first of their campaign polls.

The results suggested Pearse Doherty was on 27% with Fine Gael’s Joe McHugh on 17%. Pádraig MacLochlainn of SF and Fianna Fáil’s Charlie McConalogue were on 12%. Fianna Fáil’s Pat ‘The Cope’ Gallagher polled 10%: (similar to the Tribune result). Thomas Pringle was on 6%; Independent John O’Donnell and the Green Party’s Michael White were both on 4%. Aontú’s Mary T. Sweeney and Fine Gael’s Martin Harley were on 3%, while Independent Peter Casey was on 2%, with Independent Niall McConnell on 1%.

The margins for the final three seats are very tight and much too close to call due to a number of factors. Given that there is only a difference of 1.1% separating McHugh, MacLochlainn, McConalogue and Gallagher in the poll, the only certainty according to our analysis is that Mac Lochlainn will take close to half of the Doherty surplus.

Pat the Cope, based alongside Doherty in the Glenties area will probably anticipate a figure of close to 10%+ of this surplus. However, McHugh, Pringle and O’Donnell will also watch in anticipation as these votes stack up in their particular boxes.

It is quite difficult to predict the shareout from the surplus percentages with any degree of accuracy until the first count is completed and tally counters get a feel for how those votes are transferring.

The distribution of a surplus is reached by the distribution of the relevant bundles of 50 votes, from the top of that candidate’s pile until the required figure is achieved. When that process is completed, the second count begins.

Initially, all ballot boxes are checked for the correct information in relation to voter numbers in each box for every electoral area according to the data from the presiding officers.

It is at this point that the tally counters get their information. When the initial processes are completed, the entire votes for the constituency are brought together in a single unit that allows for the integration of the outcome across all areas to be distributed and the first count begins. As the count proceeds, the count staff set aside “doubtful’’ papers for consideration by officials and party representatives.

As the lowest placed candidates are eliminated, their preferences will be crucial with outgoing deputies battling to stay ahead in the race for the final seats.

All of this will add to the intrigue as Sunday approaches midnight (and beyond) in the Aura Leisure Centre.

In effect, there are 40 mini general elections taking place where local matters and individual personalities may take preference over party affiliations and manifestos.
Healthcare: housing: rural depopulation: car insurance, farming and investment in jobs are major issues across Donegal: the national debate on the more heavyweight issues about Exchequer spending, Brexit and climate change play to a much larger sound-scape on the country’s national outlets.

The number of ‘undecided voters’ in the Tribune poll was 14%.

Polling stations are open between 7am and 10pm on Saturday.

The checking and counting of the 209 boxes will get underway in the Aura Leisure Centre at 9am on Sunday and a first count may not be known until later afternoon.

However the ‘tally figures’ should provide a clear indication of the trends from around midday.