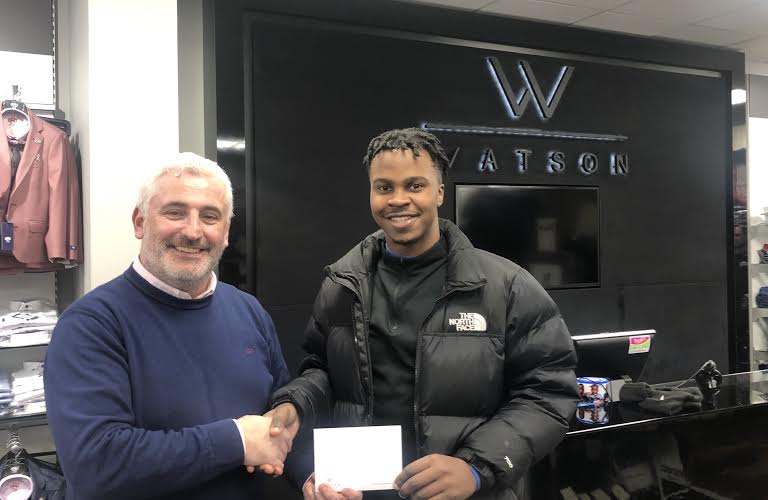 Back-in-form BJ Banda is USL Player of the Month

BJ Banda feels as if he is starting to show his real potential again.

The Letterkenny Rovers striker believes he is in his best form since returning to the bmcsports.ie Ulster Senior League.

Banda’s six goals in January have helped put Rovers to the top of the USL and the in-form hitman has been named as the latest Watson Menswear Ulster Senior League Player of the Month.

“This has been my best run of form since I came back into the Ulster Senior League,” Banda said.

“I scored some goals last year, but this year I’m going better. I stayed fit over Christmas and I just want to keep banging in the goals.

“I’m enjoying my football big time. It’s been a breath of fresh air to start scoring goals again and to remember what I can do. I just hope I can keep it up.

“I’m playing with good confidence. I have a great bunch of boys around me so I need to keep the head down.”

In League football last month, Banda netted twice in a 3-1 win over Finn Harps and was also on the mark in a 5-2 win over Derry and a 1-1 draw with Bonagee. On top of that, Banda bagged a brace in a 4-2 Knockalla Caravans Senior Cup win over Fanad United.

It has been a complete flip from last year when Rovers, who had stormed to win eight-in-a-row before Christmas, lost their way.

Banda said: “Last year, Christmas was the downfall. We lost big games against Harps and Derry when we came back in January. We knew ourselves that we couldn’t slack over Christmas.

“The hard work has been done. We’ve had a difficult run of gams, but we’ve managed to overcome them.

In the games against Derry and Fanad, Rovers had their supporters peeking through the gaps in their fingers as they gave their opponents a two-goal head start each time.

Banda said: “We have been practicing in training, trying not to concede stupid early games. The second-half against Fanad was a big turnaround. We had to really knuckle down and put in the hard work. We dug in well in those games and got the wins.”

Rovers – who are clear at the top of the League, albeit with more games played than defending champions Cockhill, are still in the Donegal News USL League Cup and the Knockalla Caravans Senior Cup, while they have a clash against Strabane Athletic to look forward to in the new North West of Ulster Intermediate Cup.

“Most boys wouldn’t have played up the north or against those teams. We know Strabane from playing them in the Lifford Cup, but it’ll be new to most boys.”

The Leckview residents won the League Cup last season and have their designs on landing more silverware between now and May.

Banda said: “It’s so far, so good. We won’t look too much into it. We still have Cockhill to play twice so who knows, we just have to take each game as it comes and hopefully we’ll move on.”