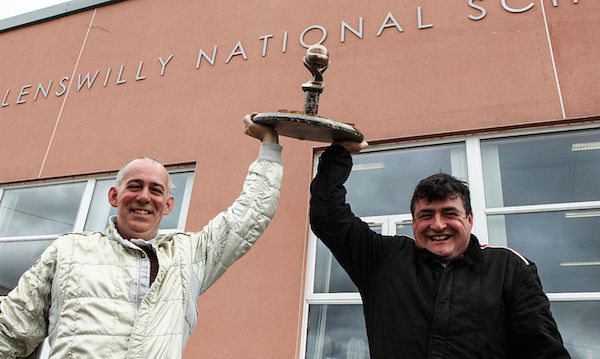 As the dust settles following the recent announcement by Damien Gallagher of his retirement from tarmac rallying our motoring correspondent, Brian McDaid caught up with the former National Donegal Rally Champion who this week reflected on an amazing road trip of a clubman’s journey behind the racing wheel. He recalls the good and bad times and the loss of his close friend, Manus Kelly.

The red Mk 2 Escort sits proudly at the side of Damien Gallagher’s garage displaying the number 1 seed on the door plate and another number 1 on the side window from the recent Mini Stages Rally. It was the first time that Damien Gallagher ever ran number one on a tarmac event in Donegal and following his announcement of his recent retirement it probably will be his last time as well.

Even before I get the question out Damien gives me an answer, “You know, I’m going to miss it, being part of all this, the craic, the competition, the banter, and the slagging, God knows what this retirement thing is going to feel like come the Donegal in June”.

At the same time there is an air of calmness about Gallagher, that makes you feel he has been thinking about retiring for a while and now is the right moment to make that thought a reality.

Damien Gallagher has always had a dream of winning they Donegal rally ever since he stood on a ditch in Glenswilly as a young fellow watching the Donegal rally passing his childhood home on the Breenagh Stage.

National winner Damien Gallagher and Mac Walsh celebrate their over all win at the end of the Donegal National Rally. Photo David McDaid

Gallagher has always competed on ‘The Donegal’ in Mk 2 Escort from his very first event starting back in the 90’s in a Mk2 Escort 1600 Sport.

Over his career consistency has brought him success on the three-day-event, Gallagher will be the first to admit that he has more second place trophies than anything else for class finishes.

The long rad home for one of Donegal’s top club driver Damien Gallagher battered escort on his way following his big crash on the Harvest Rally in which her rolled his Ford Escort Mk2. Photo Brian McDaid.

In the early 2000’s and the split for MK2’s from the International to the national section Gallagher built a fully modified MK 2 to compete at the next level in his career. For most of the time, it was a joy just to see the finishing ramp battling it out with the top MK2 men over the three days of ‘the Donegal’ but as the years went on both Gallagher and his navigator Mac Walsh were starting to tire of finishing 2nd or 3rd at the ramp on a Sunday evening.

It was fellow Glenswilly man, the late Manus Kelly that unlocked the potential in Damien Gallagher’s rallying career. Manus used Sport Psychology as part of his preparation for the Donegal Rally, For years Damien Gallagher put everything into the preparation of the rally car for the Donegal but never figured that his own frame of mind needed to be in the right place if he was to succeed.

The success that Manus had winning the National of the Donegal in 2015 encouraged Damien Gallagher and Mac Walsh to prepare for the following years Donegal rally in a way that the crew never prepared before. Success on a small rally down the country on the run-up to the Donegal in 2016 was a good yardstick for the crew that their personal preparation was paying off.

Competing on the Lough Fern Stage in the recent Mini Stages reminded Damien of the commitment himself and Mac put in on the Donegal in 2016, which used the same stage. That day the crew sat awaiting the start and put all they believed into their competition which was the difference in winning and finishing as runners up. They arrived at the finishing ramp as winners of the National Donegal Rally with the late Manus Kelly with Donall Barrett winning their first of three Donegal International Rallys.

Damien’s lowest point in his career was the ban imposed on him by Motorsport Ireland which meant that he was unable to defend his title the following year in 2017, but on reflection this week Damien says the passing of Manus Kelly last year put all things in perspective.

Back In 2016 when the Manus Kelly decided to move to a Subaru World Rally Car to contest the Donegal International, in an interview for this column a few years ago Manus talked about watching his hero and fellow Glenswilly man Damien Gallagher taking part in the Donegal Rally back in the 90’s and Damien was one of the people that a young Manus Kelly took inspiration from standing on a ditch in Breenagh.

The late Manus Kelly had a great belief in Damian Gallagher long before Damien Gallagher had any real belief in himself, Damian believes that Manus lead the way in positive attitude and we bought into that belief in our preparation on out way to winning out title and dream.
Hot Run.

A young Damien Gallagher happy with his performance on the first day of the Donegal International Rally. Photo Brian McDaid.

You wouldn’t think looking at the in-car You Tube video of Damien and Mac on the recent Mini stages that this crew were preparing for retirement from the sport as these crew are well on the pace, with the rev limiter light flashing in top gear. But Damian feels that now is the level that he wants to call it a day at. He achieved his dream he won the Donegal Rally in his modified MK 2 Escort and them modification have moved on a good bit since then. He would need 40 more horse-power in his present-day engine to be back up with pace the big boys but as Damien makes his way towards the 50 mark he feels he has nothing to prove and has achieved his goal and is thankful to all who have helped him and supported him throughout his career.

Damien may have said goodbye to rallying in recent weeks but he is not ready to say goodbye to the MK2 Escort. A long term project sits up in the corner of his shed with a tarpaulin cover on it. Under it sits and Mk 2 Escort, a life long friend Michael Glackin, who also did a lot of the fabrication work on the first MK2 escort that the late Manus Kelly competed in makes a trip down from Glenfinn to Damien Gallagher’s Garage one evening a week to work on this beautiful MK 2 two door escort.

Under a workbench a 1600 pinto engine is sitting with twin downdraft Webbers ready to breath life back into this project. The car will be just for road going and will be built to the spec of the Old Ford Escort Mk2 Mexico.