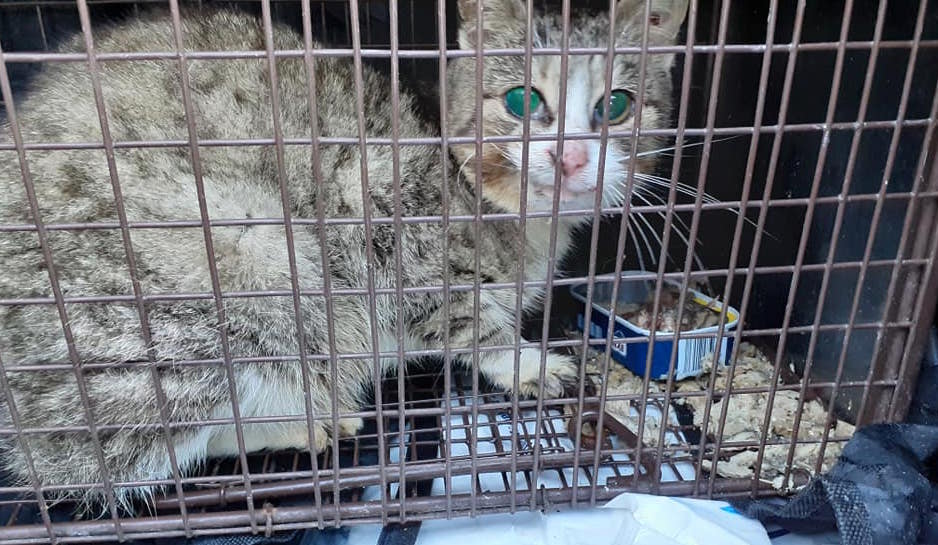 Shock after rescuers find cat shot in the face

Rescuers of an injured cat found near Lifford were horrified when x-rays revealed that the cat had been shot in the face.

Last weekend, two volunteers from Donegal charity Animals In Need (AIN) spotted the cat while carrying out routine Trap/Neuter/Return (TNR) of feral cats in the area.

Named Tamara by her rescuers, it turned out that the cat had been a pet until her owners moved away and left her behind to fend for herself a few months ago.

The AIN volunteers noticed that she was in poor condition generally, was extremely emaciated, suffering from cat flu and one side of her face appeared to be caved in and so they quickly caught her and brought her to the vets for assessment, where the full extent of the horrors this poor cat had endured were exposed.

A shocked spokesperson from AIN said “An x-ray at the vets showed metal shards in her jaw. No injury we can think of would present with metal fragments in the jaw apart from her having been shot in the face.’

She continued “Sadly, only today there were reports of cats being shot at in the Ardara area. Tamara is not from this area but seems to have been deliberately shot at too. How can anyone do that?’

“It was bad enough that Tamara had been abandoned by her previous owners and was struggling to survive by herself, but for someone to then shoot her, defies belief.’

Not only is this an act of deliberate cruelty, it is a crime, according to Animals In Need.

AIN stated “We understand that not everyone likes cats but that is no excuse to harm them, whether that be by shooting them, poisoning them or any other means. We recently heard a whole colony of feral cats we’d neutered in Ballintra has been wiped out through poisoning.’

If you have any information on the laying of poisoned bait, please pass it on to the Gardai or the Officers at the National Parks and Wildlife Service.

Meanwhile, it is hoped that Tamara’s run of bad luck is finally over.

Her fosterer at AIN’s cattery said “She is now safe and will be getting lots of TLC while she recovers. Despite everything, she is a sweet little girl and once she is better, she will be found a nice, safe home where she will get the love she deserves and will never be abandoned again.”