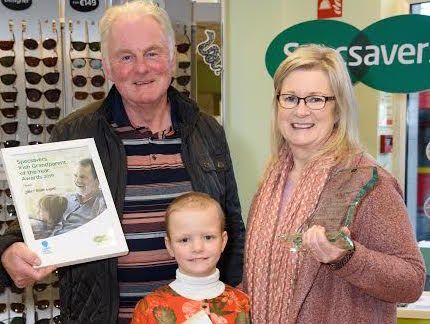 A Donegal couple has been named the overall winners of Specsavers Grandparent of the Year Award 2019.

Grandparents John and Alicea Logue, who provide extraordinary support and care to their granddaughter as she battles cancer, have been crowned the overall winners of Specsavers Grandparent of the Year 2019.

The annual awards celebrate the astonishing contribution that grandparents make to the lives of grandchildren and the community.

John and Alicea from Moville were named the winners for their outstanding support, care and devotion to their granddaughter, Caitlin Logue.

As well as being loving grandparents to Caitlin Logue, 8, their caring nature is infectious.

When Caitlin was diagnosed with a rare form of cancer two years ago, John and Alicea put their lives on hold to care for her.

Caitlin said “My nana and grandad devote all of their time to bringing me between Letterkenny and Crumlin Hospital for chemotherapy as well as spending long periods of time with me in hospital during my treatments. My nana has been trained in taking my bloods and cleaning my Hickman line which is extremely important.

She added “Nana and grandad also manage to make time for their nine other grandchildren, including some in Scotland and Australia. Not only do nana and grandad help out with all of the important things, they are always on hand to help out with the dinners, the school runs and all the babysitting duties.

John and Alicea invest all of their time into being great grandparents and this is why Caitlin believes her grandparents are such deserving winners.

John and Alicea said “We are delighted and overwhelmed to have been selected as the overall winners of the Specsavers Grandparent of the Year Award. It is such an honour and so touching to know that our granddaughter is proud of our story and that she cherishes our relationship.’

The team at Specsavers Letterkenny were delighted to present winners, John and Alicea with their prizes of a bottle of champagne, a Specsavers hearcare voucher, a Specsavers eyewear voucher, a framed certificate and an official Grandparent of the Year 2019 trophy. In addition they were awarded with a weekend away in Ireland for the whole family and Caitlin won a new iPad Mini 64GB for nominating her grandparents.

It is a fantastic way to recognise and appreciate the special role that grandparents play in Irish families, while encouraging people to prioritise their hearing. I want to commend John and Alicea for their incredible role they have played in Caitlin’s life.’

Audiologist at Specsavers Letterkenny, Martina McNulty, said they are thrilled to present John and Alicea with their prize, and are touched by the wonderful story written by their granddaughter.

She said “This campaign recognises the special role that grandparents play in Irish families and communities. It’s an amazing opportunity for younger generations to recognise their changing role and show the appreciation that they deserve. It is heartwarming to see such a strong bond between a granddaughter and her grandparents.’

Specsavers Audiologists partnered with for Beaumont Hospital’s Cochlear Department for the second year running who are proud co-sponsors of Specsavers Grandparent of the Year 2019.

Peter Walshe, consultant ENT surgeon at Beaumont Hospital, says: ‘We were delighted to be co-sponsors of this family and community-focused campaign with Specsavers. It is so important to honour and recognise grandparents across the country as they play such a pivotal role in the lives of young people.’