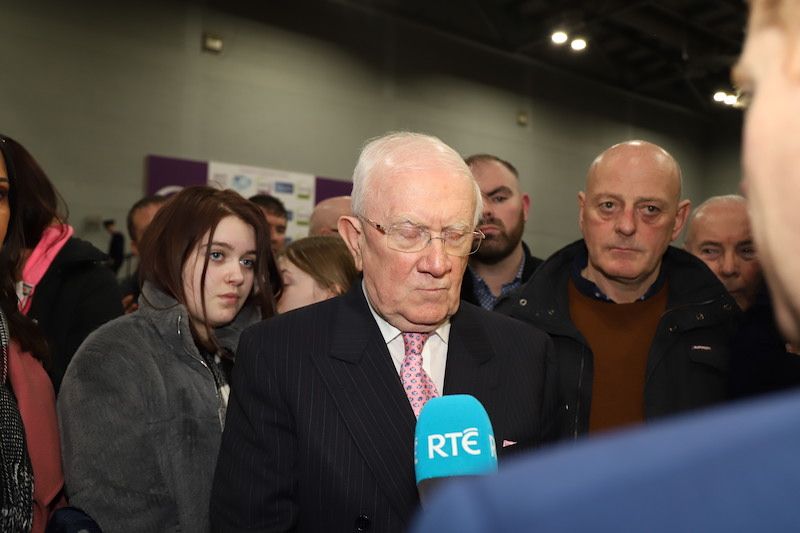 PAT THE Cope Gallagher says a ‘Sinn Féin tsunami’ cost him his seat in Dáil Éireann.

The veteran Donegal politician dramatically lost his seat this afternoon in spite of running what he said was the best of the 16 campaigns he has been involved in.

A tense second day of counting in the Donegal constituency concluded with the 71-year-old Burtonport man missing out by just 358 votes to fellow Fianna Fáil TD Charlie McConalogue.

Last night before leaving the Aura Centre, Gallagher, while hopeful, admitted that he felt ‘uneasy’.

His fears rang true as a gripping day finally saw Gallagher succumb when, on the ninth count, Thomas Pringle, Joe McHugh and McConalogue were elected.

Gallagher was tipped to benefit from the transfer of John O’Donnell’s 7,106 votes. However, McConalogue fared better, taking 1,162 as against Gallagher’s 928.

Gallagher had 7,469 first preference votes on a weekend when Sinn Féin duo Pearse Doherty and Pádraig Mac Lochlainn were elected on the first count last night.

“The Sinn Féin tsunami had a knock-on effect,” Gallagher said.

Following the elimination of Independent candidate O’Donnell, four candidates battled for the last three seats and the Kilmacrennan-based businessman’s transfers were key.

It had been expected that Gallagher would be the better beneficiary from the distribution of O’Donnell’s 7,106 votes, but those predictions did not come true as the axe fell on a 39-year political tenure.

Gallagher was first elected as a TD in 39 years ago, at the first attempt in 1981.

Under various Governments, Gallagher served as Minister of State for the Departments of Gaeltacht, Environment, Transport, and Health.

He returned to the Dáil four years ago, elected on the 11th count and was Leas-Cheann Comhairle since July 2016.

Gallagher said: “The one thing the people of Donegal will miss is the service of my office and the work of Aideen and Noreen.

“One winner is my wife Anne, who will see a lot more of me now.”

Overall in Donegal, Fianna Fáil’s vote has plummeted by 10 per cent, the party losing some 6,807 votes from 2016, but Gallagher added: “Don’t forget, a one per cent swing in the vote would have returned two Fianna Fáil TDs.”