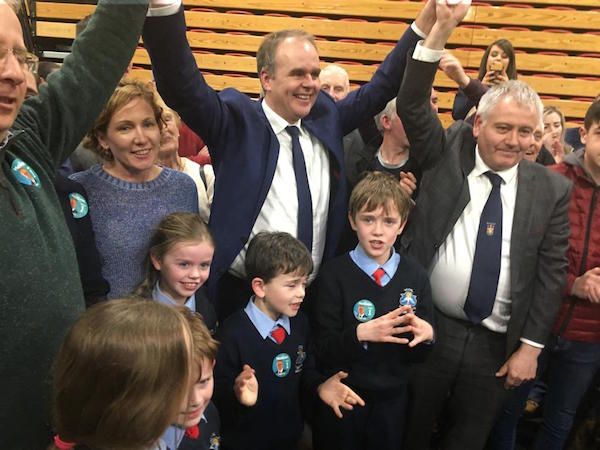 Election 2020: Party vote transfer gets McHugh back to Leinster House

Joe McHugh has returned to Dail Eireann after a nervous election count which left many doubting if he would get over the line.

Even the Carrigart man himself admitted that he was “nervous’ throughout today’s election count at the Aura Leisure Centre in Letterkenny.

A huge turning point for the outgoing Minister for Education was the transfer of a staggering 1,932 of party colleague Martin Harley’s votes.

Not even his own party could have predicted such a huge vote transfer from the Ballybofey publican with many hoping for a return of around 1,500 or 50% of that transfer at best.

McHugh was well behind the leaders after the first count with a modest 7,621 first preference votes.

And as the counts passed, it looked as if the challenge was getting even more unsurmountable for McHugh.

He remained behind Pat the Cope Gallagher and McConalogue and even Thomas Pringle until the Harley transfer surprised many.

The vote that finally got McHugh over the line came from the unlikely source of John O’Donnell when he secured 1,184 transfers from the Kilmacrennan man.

McHugh had earlier told Donegal Daily that he was ‘nervous but hopeful’ that he would secure enough votes to return him once more to Dail Eireann.

All that nervousness and doubt was banished at 6.59pm when McHugh was hoisted shoulder-high by his supporters.

He may well find himself in opposition but the former teacher and youth worker would have taken that in the midst of all that doubt earlier this morning.