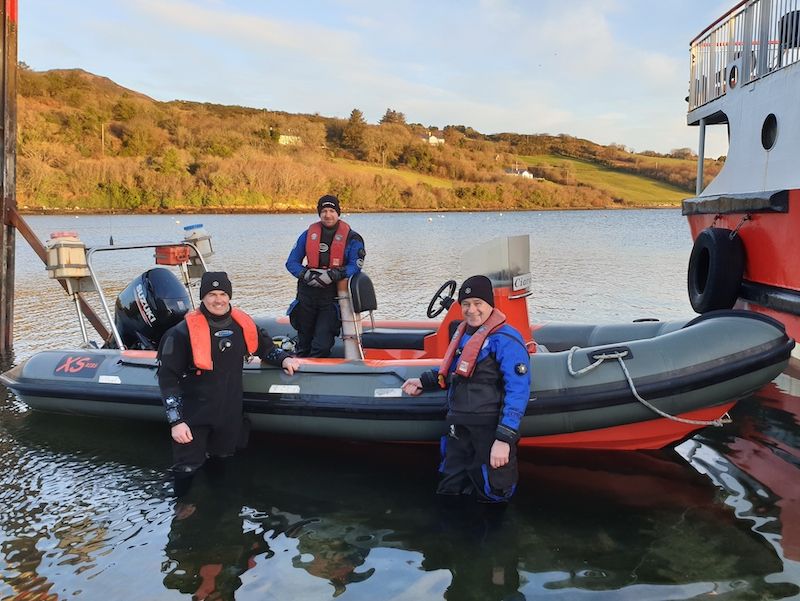 Sheephaven divers get ahead of Storm Ciara – aboard Dive Boat Ciara!

In anticipation of the pending landfall of the next named storm in this winters’ cycle, the divers proceeded up to the dive site with David McGloin taking the helm of the appropriately named Dive Boat Ciara.

The dive site is a rock wall that falls away initially to 10 metres and then gradually off into nearly 40 metres, with the sea bed consisting of a boulder field that provides refuge to a good range of marine biodiversity.

It was noted how sharp the rock structure was and it is geologically described as Hornblendic and sometimes Schistose, however the area around it is consists of Dolomitic marble and semi-pelitic schists, which forms the Glencolumbkille Limestone Formation, laid down during the Dalradian series of geological formation, quite possibly up to 800 million years ago.

The water depth at 40 metres is a feature of this location in North Water, with Stookan Island nearby which has deeper water again at closer to 50 metres.

In-water conditions at 5 degrees Celsius were cold, which is a result of the amount of fresh water run-off and the distance from the open sea to circulate warmer currents.

Horizontal in-water visibility was good at well over 5 metres and dive time of 30 minutes was recorded to a maximum depth of 25 metres.

True to predictions Storm Ciara came howling in form the south west and with a Yellow Wind Warning in place Sheephaven divers heeded the advice of the Irish Coastguard to Stay High and Stray Dry – so the routine Sunday morning snorkel was cancelled.

As always it was good to get into the water when we can and we look forward to better weather in the near future when we can maximise diving in Donegal waters.

Sheephaven divers get ahead of Storm Ciara – aboard Dive Boat Ciara! was last modified: February 11th, 2020 by Chris McNulty
FacebookTweetLinkedInPrint