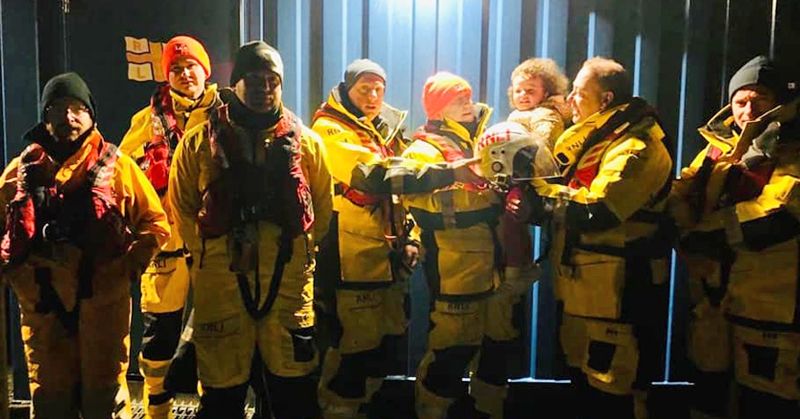 The baby girl who touched many hearts when she was saved in the Buncrana Pier tragedy has made a special visit to the local RNLI crew this week.

Rioghnach McGrotty was just four months old when she was saved from the freezing waters of Lough Swilly after her family’s car slid off a slipway at Buncrana pier.

Rioghnach was the sole survivor after being rescued by passer-by Davitt Walsh.

Rioghnach’s mother Louise James was the only member of the family who was not travelling with them on that night.

Louise has said her beautiful daughter Rioghnach was her “one ray of sunshine” after the heart-breaking tragedy.

Louise and Rioghnach both paid a visit to the Lough Swilly RNLI on Tuesday night before their training session. The mother and daughter presented a donation to the volunteer crew following a family fundraiser with cousins.

The family has become loyal supporters of the RNLI following their efforts on the night of the tragedy.

Joe Joyce from the Lough Swilly RNLI said the donation was gratefully received.

“Louise and Rioghnach would be good friends of the station and have visited on many occasions,” Mr Joyce said.

“Rioghnach has met a lot of the crew and would come down to see the boat going out.”

Another crew member commented on Facebook that “Rioghnach was very impressed with the crew’s yellow pyjamas!”

Warning for Donegal as weather takes a...

Woman airlifted to hospital from Errigal