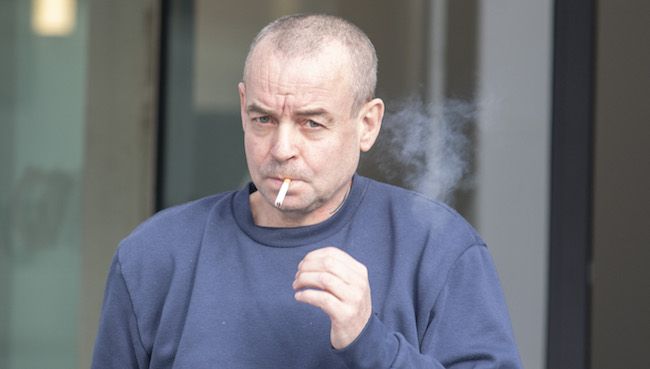 A woman had to pretend she was dead after her former boyfriend came to her home with a rope and a knife and told her he was going to kill her.

The woman’s partner, Stephen Roulston, appeared at Letterkenny Circuit Court in Co Donegal where details of the horrific attack were revealed.

Roulston, who has a two-year-old son with the woman, called to her home at Glen Park, Mountain Top in Letterkenny on May 7th last year.

Although the couple had split the relationship had been fine.

However, when Roulston got into the house he completely changed and viciously attacked the woman.

He produced a blue rope and a knife and told his victim “I’ve come to kill you.”

He then grabbed her by the neck and squeezed her throat until she collapsed on the ground.

The court was told the terrifying ordeal happened in front of the two-year-old boy.

The victim pretended she was then but Roulston, aged 53 of Ballindrait in Lifford, stood over her and upon seeing her moving he began to punch her again.

He punched her in the head again and the woman again fell to the ground and Roulston again told her “I don’t want to go without killing you.”

The woman miraculously managed to flee from the house with her son and even locked her attacker inside the home having grabbed the knife on the way out.

She fled to a nearby creche facility and contacted Gardai who rushed to the scene.

When they arrived the woman was still holding the knife and explained to Gardai that her ex-partner had brought it to kill her with.

Gardai said that the woman was the most traumatised victim they had ever come across.

Officers then managed to burst into the property and found Roulston standing on the stairs with a rope around his neck and he appeared drowsy having taken some tablets.

The victim was not in court but forwarded a victim impact statement telling how her life has been changed utterly since the brutal attack.

The woman revealed how she was a competitive runner but can no longer take part in her sport because she feels depressed.

She regularly takes painkillers and fears what the tablets are doing to her internal organs.

She added “My body and my mind are in a high state of alert all the time. I keep thinking he is coming for me.

“I stayed in the living room with my child for two weeks afterwards thinking he was coming for me.

“I live in such fear that I take my youngest child with me everywhere I go, even to the bathroom. I cannot be in large groups.

“He has also impacted on the lives of my children and I have become a scared mammy. My sense of self has changed. I cannot make connections with anyone.

“When he was strangling me he was looking straight into my eyes. I had to think about muy breathing all the time after the attack.”

Roulston apologised for the attack and claimed he didn’t remember what had happened during the incident as he was on sleeping tablets for anxiety.

Judge John Aylmer said this was unconvincing however, as the attack happened over a sustained period of time.

He jailed Roulston for three and a half years in total but suspended the last nine months meaning the accused will serve two years and nine months.

Woman pretended she was dead after being attacked by ex with knife was last modified: February 14th, 2020 by Stephen Maguire
FacebookTweetLinkedInPrint
Tags:
attackcourtdonegalGardailetterkennyStephen Roulston