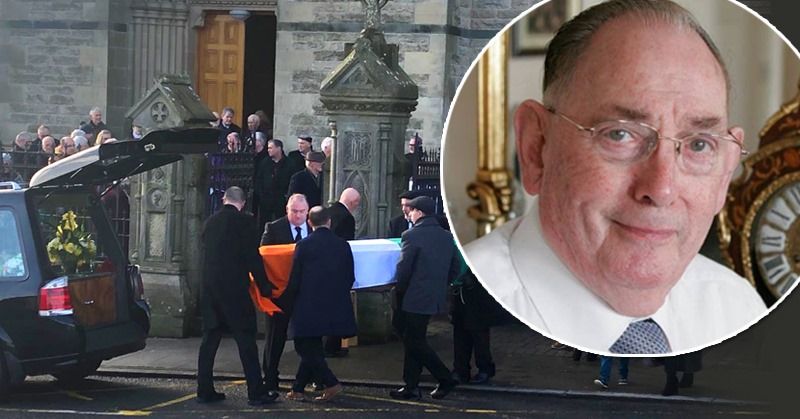 LETTERKENNY Republican Pat Dawson was remembered yesterday at his Funeral Mass as someone who loved his family, his faith and his country.

The late Mr Dawson (90), of Port Road, Letterkenny passed away in Beaumont Hospital on Tuesday.

Pat’s coffin was draped in a tricolour as it was carried to and from St Eunan’s Cathedral.

Rev Philip Kemmy CC, Letterkenny, recalled a man of great faith who had been a member of the St Eunan’s Cathedral Choir.

“The Dawson family connection to this Cathedral stretches back a couple of generations to its very construction. Pat was very, very proud of that association and was very proud of this House of God.

“Faith was very important to him.”

Rev Kemmy remembered a man who lived by the virtues of faith, hope and love.

He said: “His love of God, his love of Our Lady and his hope to fill this Cathedral every morning for 10 o’clock Mass to singing the praise of the Sweet Heart of Jesus or seeking the intercession of A Mhuire Mháthair after Communion and closing out the Mass with Hail Queen of Heaven.”

Our Lady, Rev Kemmy mentioned, ‘was the only sovereign Pat would bow to’.

“He loved all things Irish,” he said. “He loved Gaelic football and the Irish language. Putting it mildly, he loved his country – all 32 countries of it.”

The month of March, Rev Kemmy remembered, would see Pat replace the renditions of Hail Queen of Heaven with Hail Glorious Saint Patrick.

In his early life, Mr Dawson rose to prominence in the Republican movement, serving as the OC of the IRA in Donegal.

His late grandfather, Patrick, formed the first Sinn Féin Cumann in Letterkenny and Pat was a member of Sinn Féin for over 65 years.

Former Sinn Féin Vice-President Pat Doherty was among the mourners at the Funeral Mass yesterday.

At the beginning of the Funeral Mass, a Donegal jersey, a hymn book and a picture of Pat and his late wife, Mary, were carried to the Altar.

“Pat had a great love of his family,” Rev Kemmy said.

“So many of his 90 years he spent with his wife, Mary, who passed away four years ago this month. Married since 1953, her passing was hard on Pat. He loved his family and especially his grandchildren.”

Pat’s death was the second bereavement in the family this week following the passing of his sister, Mona Dorrian, on Monday.

He was predeceased by his wife Mary, brother Michael and sister Mona and is survived by his daughter Dara, son Pauric, grandchildren and a wide circle of friends.