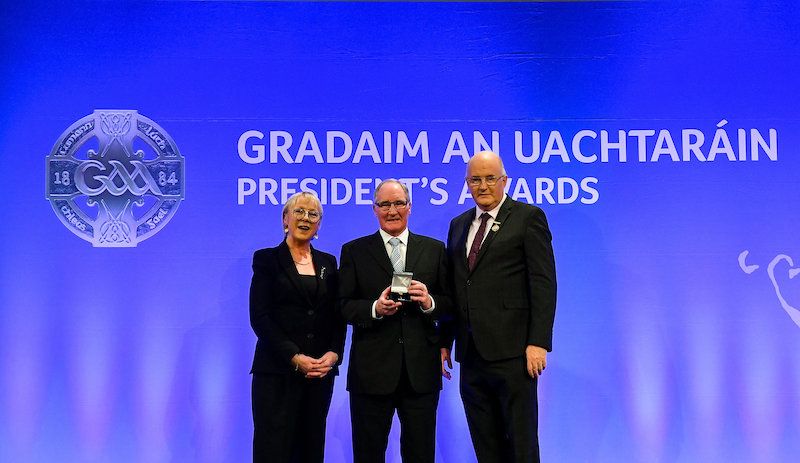 The President’s Award acknowledges outstanding commitment and long service across the club and county network of the GAA.

At a ceremony in Croke Park that was shown live by TG4, Con picked up Gradaim Gaeilge for his outstanding contributions to the area of culture and the Irish language within the GAA.

A native of Dunlewey, Con moved to Moville in 1968. Two years later, having driven the Gaelic football message since his arrival, he was instrumental in founding the Moville GAA club.

In 1978 Con had his first involvement in Scór and football, music, language and culture have been his passions for Club and Community ever since.

“Countless young people in the Parish have been coached and mentored by Con and he promoted Irish Language and Culture long before it became more widely popular,” the Moville club said

“Without Con our Club wouldn’t be where it is today and his energy remains undimmed 50 years after those initial efforts to establish the GAA here.

“The impact and infectious enthusiasm of these people is the beating heart of what our great Association has grown to be for more than 130 years.

“These awards present us with an all too rare opportunity to stop and reflect and say thank you to a group of people who have made and who continue to make a life-long contribution to the GAA and who are such magnificent role models.

“There are 11 awards presented here across all codes and all walks of the GAA life. In their own way they are ambassadors and shining examples of the countless other volunteers at home and abroad who give so much of themselves for the betterment of the GAA and who we are proud to be able to call our own.”