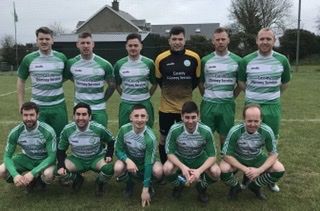 Listen: Kieran Brennan says derby win has Castlefin back in the hunt

With Kilmacrennan and Kildrum drawing at the same time, Castlefin are firmly back in the shake-up.

“That was must-win to keep us involved at the minute,” Brennan told Donegal Daily/Donegal Sport Hub.

“It’s enough to keep us ticking over anyway. We had to go in with a lead. It would have been very hard to come out there at 0-0 and even one goal probably wouldn’t have been enough.”

Foy and Friel had Castlefin 2-0 up at the break with Cappry rocked by the sending off of the influential Paddy McNulty.

Brennan said: “Losing today would have meant we’d be out of it. We had to win. A draw was out of the question.

“We’ve been in this situation before. Games in hand aren’t points and there are plenty of good teams in this League.”