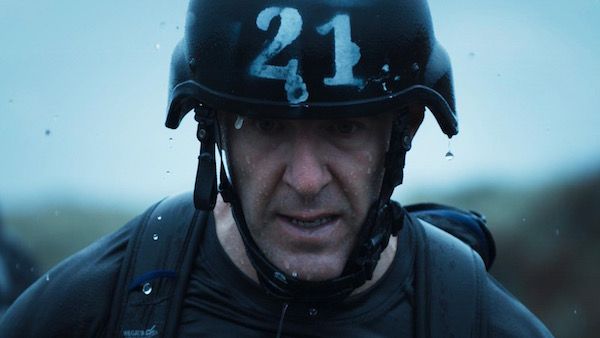 ‘What have I done?’ – Jason Black on his week in hell!

Jason Black has been to hell and back this week – literally. The Letterkenny man, an endurance athlete has been chosen for the RTE series ‘Special Forces Hell Week.’ In this special report for Donegal Daily, Jason begins a weekly blog of his time inside – hell!

“Special Forces Hell Week” – I honestly don’t think any form of preparation gets you ready for what’s just about to happen. And then the bomb goes off and you’re catapulted from this modern safe and comfortable world into something unexplainable, incomprehensible and unimaginable. You’re now in the world of the elite special forces, and it’s madness.

“Four elite DS Irish Rangers known as “Duty Staff” known from here onwards, stop the bus filled with 28 nervously chatty civilians. The silence is deafening, time stands as still as stone-cold DS Ger Reidy and then all hell breaks loose as the bus is stormed with rage, aggression and fear.

“You have some understanding from the briefing and selection days that it’s going to be tough, but nothing prepares you for the volume of relentless physical hardship.

“You start off strong because you’re fresh rested and in peak condition but it’s not long until everyone feels the shattering effects of the submerged cold river waters, continuous drills crawling or carrying in stress positions and the verbal aggression unleashed by the DS’s forcing even the strongest beyond their comfort zone, triggering that repeated questioning “WHAT HAVE I DONE”… it’s going to be a hell of a week”.

“It’s non stop, simply nothing like a TV programme. The cameras disappear, at least from your mind and the reality sets in, it’s no joke, this is full metal jacket.

“The Army Ranger Wing (ARW) is one of the toughest, best-trained Special Forces units in the world. They are on standby 24 hours a day, either to deploy overseas or to react to any serious domestic criminal or terrorist threat.

“This constant high level of preparedness means there training and skills are benchmarked against other elite Special Forces units across the world including the SAS and the Navy Seals. The failure rate is upwards of 90%, only the toughest, most mentally robust candidates pass.

“The exercises run day and night straight with no break, with the exception of a make believe sleep of 25 mins, just to dig deeper into the weakening psychology of your mind, and all on a single pot of noodles, which tasted heavenly.

“The drills continue stripped naked in the PT yard holding hours of press ups and stress positions for simple civilian mistakes and then it’s time for the bridge jump. This wasn’t expected as early as we thought, we had no idea of the sequence of events. With time not your friend, it’s possibly 3am, the rain is pelting down, it’s cold, we’re shivering and we haven’t even hit the water yet.

“Pitch black below, not knowing the height, the drop, the water temperature or river flow or indeed the depth of the water below all played complete havoc with an internal screaming mind. #25 Adam’s up first, 6ft 2′ and built like a wall. The mind rules all as he failed the task. Even as a high altitude climber I was bricking it, it seemed an eternity, shaking in my boots, it’s around for the second jump, I’ve got this.

“Scrambling with wet cloths it’s back to the barracks on the open back army saracens, before being reloaded for the beach somewhere in Ireland. With even a drop of an eye the DS screams were cutting, basic admin kit mistake are mistake forced more hardship but everyone stayed strong determined not to buckle.

“Six hours we spent at the beach, building different types of sandcastles. They called it scratch, a major eliminator. We rolled in and out up and down the vomit was made put back in your pocket, the sand was everywhere, the sea ripped through your pores, and it personally became my highlight. I loved the relentless exercises rolling, lifting telegraph poles, pulling army machinery tyres and in time the pain numbed, the screaming mind silenced and I became peacefully psychotic inside.

“Sitting watching the programme unfold last night on RTE2, brought it all back, but in a good way. Yes, it’s tough on a whole lot of levels – physically, emotionally, mentally, that goes without saying. But I survived and that’s incredible.

“It was hard to watch fellow comrades surrender to the chimp paradox, knowing that that line of giving up or pushing on is so thin and only a heartbeat away. The pride of sharing the experience with my family and my community is priceless to me.

“I have a hope that my actions and confidence to step forward, face the unknown, embrace fear and trusting my own inner ability to survive, especially at times when the odds are so stacked against, motive others in life.

“The personal messages of support were warming and strengthening. The honesty in the messages was mind-blowing, from people struggling in their own everyday life that took hope and felt empowered to continue to move forward one step at a time.

“If my actions extreme as they may sem can help change, support, empower or inspire one individual to fight the good fight …. then it will all have been worth it, and I’ll proudly do it all again next week RTE TWO 9.30pm.

“Tune in, I kept my head down so far, let’s see if it continues.”