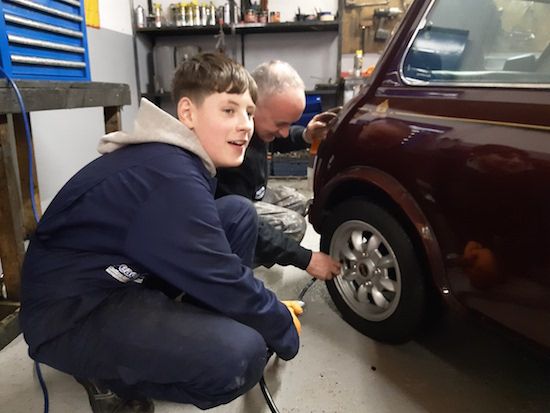 A unique project which aims to provide young people with a greater understanding and respect for Donegal’s roads has seen its first participants pass with flying colours.

Ten teenagers from all different walks of life now have certificates from The Garage.

The project is an off-shoot of the county’s already hugely successful Pro Social driving course organised by Pro Social Ireland.

That project has given hundreds of participants a better understanding of the respect and patience needed behind the wheel to prevent accidents.

The idea was first mooted over almost a decade ago in 2012 when Gardai and the judiciary saw first-hand the number of people coming before the courts on driving offences.

Some of them took it personally and decided enough was enough.

The large group which attended the official launch of The Garage Project the latest initiative being rolled out by Pro-Social Ireland. Photo Clive Wasson

Instead of dishing out more and more penalty points and hefty fines, Garda Inspector Michael Harrison and Tim Coughlan of the Probation Services decided to approach Judge Paul Kelly.

They say down to examine ways of trying to encourage people to take a different view of life behind the wheel once they had committed a traffic violation.

And so the first tentative roots of the Pro Social Ireland took hold.

Drivers who are directed to undertake the course by the courts are given an understanding of the impact their actions could have on other drivers, as well as pedestrians not to mention themselves and their families.

The results have been nothing short of remarkable with very few of those completing the course coming before the courts again.

Indeed so successful has the course been that six more counties across Ireland have now rolled out the programme in an attempt to achieve the same success.

The Garage is the brainchild of Pro-Social treasurer, Paul McCusker and chairman, Mick Quinlivan.

It is supported by the European Union’s Peace IV Programme, managed by the Special EU Programmes Body (SEUPB). The Peace IV Programme has a value of €270 million and aims to promote peace and reconciliation in Northern Ireland and the Border Region of Ireland.

It is aimed at making Donegal’s roads a safer place for everyone through educating and mentoring and according to the group itself it is “about saving lives.”

Those targeted as trainees for the project are teenage boys and girls who have an interest in cars and who may or may not be at risk as a result of their behaviour on the road.

Daniel McGinley and Oisin Gallagher help Denis Ferry get to the route of the problem.

Having an idea for a course is one thing but putting such an action plan into place was always going to take the right people.

Enter ‘garage men’ Leslie O’Donnell and Denis Ferry, two men who probably know more about cars than Henry Ford and all his employees put together ever did.

At Denis’ old garage space in Pine Hill Business Park at Mountaintop in Letterkenny, ten young people recommended for inclusion by the Donegal Youth Service have bought into the idea in recent weeks.

Cajoled, encouraged and given a slight nudge on occasions by O’Donnell and Ferry, any scepticism that may have been in the minds of the teenagers on the course for the past month has disappeared.

Instead, it was replaced by a curiosity at being taught the basics of car mechanics and panel beating.

Gradually an education about the importance of good driving behaviour and the consequences of not doing the right thing seeped in.

Lorraine Thompson of the DYS, Tim Coughlan from the Probation Service, Judge Paul Kelly and Garda Inspector Michael Harrison at the official launch of The Garage Project the latest initiative being rolled out by Pro-Social Ireland. Photo Clive Wasson

Participant Ryan Cunningham gushes when he speaks about his time on the course.

“I’m having my first lesson next week and I just can’t wait. I have earned so much on this course but ultimately it has taught me that driving is a very serious thing and it has to be respected,” he said.

For people like Donegal’s Road Safety Officer, Brian O’Donnell, running such courses is a no brainer.

Every time Brian hears of a bad accident or, God forbid, another loss of life on Donegal’s roads, he takes it personally.

He says the reality is that if this course can stop one young person from getting behind the wheel and causing an accident or being hurt or even worse themselves, then it will be a success.

Garda Inspector Michael Harrison has probably attended more serious road accidents than those on the course have had birthdays combined.

He recalls attending his first inquest of two young men killed in Donegal whose car was modified in such a way that they stood no choice of surviving when they crashed.

He was told as much by the PSV Inspector, Sgt John McDaid at the inquest.

Inspector Harrison retires next year and won’t miss attending the scenes of the deaths of young people.

The launch of such courses and the small steps in educating young people about the dangers on our roads every time they get behind the wheel give him some hope, he says.

Judge Paul Kelly said that he knew not long after arriving in Donegal as a District Court Judge many years ago that something needed to be done.

After being approached by Michael Harrison and Tim Coughlan, he agreed to row in behind the Pro Social Driving Project.

It has succeeded and he hopes that The Garage will be another small step in educating young and old about the dangers that lurk behind every sharp bend or corner in the road network around Donegal and beyond.

He points to rough figures which suggest that the number of fatalities on Donegal roads have dropped by half in the past decade compared to the previous decade.

One life lost needlessly on our roads is one too many but one saved through education thanks to projects like The Garage is something we must continue to aspire to.

Some of the large crowd who attended the official launch of The Garage Project the latest initiative being rolled out by Pro-Social Ireland. Photo Clive Wasson