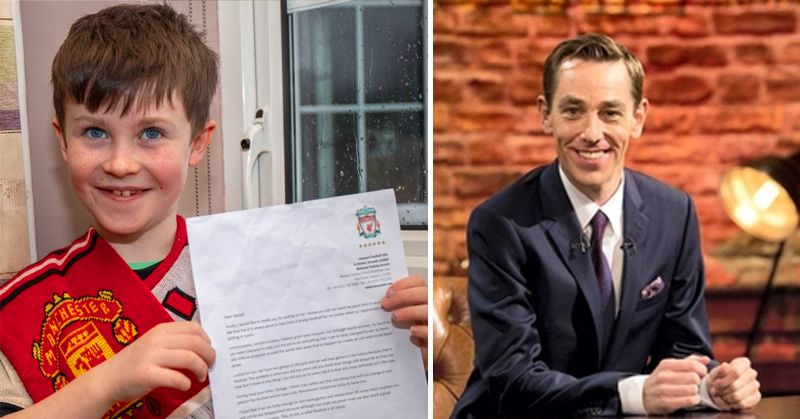 The Donegal schoolboy who wrote to Jurgen Klopp asking him to lose some matches is to appear on RTE’s Late Late Show tonight.

Little Daragh Curley penned a letter to the Liverpool manager saying that as a Manchester United fan he was sad because Liverpool kept winning.

The German manager amazingly wrote back a personal letter in which he said he was sorry to Daragh but could not lose.

He said he owed it to millions of Liverpool to make sure his team win as many games as possible and hopefully some more trophies.

However, he thanked the ten-year-old Glenswilly schoolboy for being so passionate about football and wished himself and his team good luck in the future.

The story first appeared on the Donegal Daily news website but caught the attention of newspapers, radio stations and televisions around the world since yesterday.

Gordon said he simply couldn’t refuse because his all-time hero time and former Man Utd star Roy Keane is also on the show.

“It was a lot to take in but then I remembered Roy Keane is also on the show and that was it. We’re all packed now and we’re heading up the road.”

Gordon said the reaction to his son’s story has been nothing short of overwhelming.

“We all got very excited and we were a little bit anxious to be honest with all the attention.

“But we just decided to go with it and enjoy it because it won’t last forever. It’s a lovely story which makes a change from all the bad news we’re so used to.”

Gordon revealed he has been contacted by the world’s media including SKY News and American TV giant CNN.

“I’ve had to tell CNN we can’t do the interview at the moment because we’re doing the Late Late Show with Ryan Tubridy. It’s mad,” he added.

And his excited dad added “It’s all Donegal Daily’s fault. That’s where it first started.”