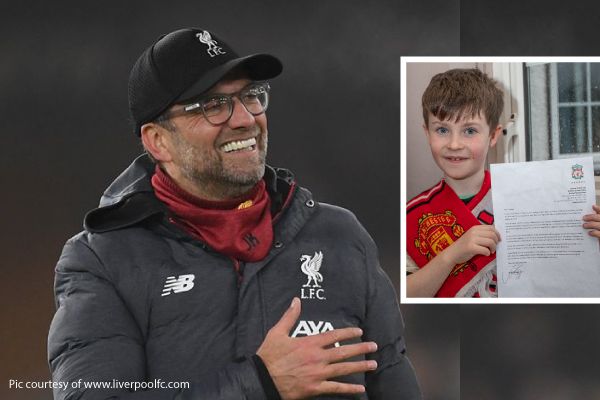 ‘I just had to respond to ‘cheeky’ Daragh’ – Liverpool boss Klopp

Donegal Daily yesterday exclusively revealed how the 10-year-old Glenswilly lad wrote to the German pleading with him to lose more games.

As a Man Utd fan, Daragh said he was sad that his team’s biggest rivals were winning so many games.

Daragh was left stunned when Klopp wrote him back a personal letter saying he couldn’t allow his team to lose as millions of fans wanted then to win!

The story has now gone viral after it first appeared on Donegal Daily and has been followed up by The Irish Times, RTE, SKY news, the BBC and CNN.

Daragh is even set to appear on tonight’s Late Late Show with Ryan Tubridy.

Responding to a question about the letter at Liverpool’s press conference on Friday afternoon, Klopp told reporters that he was delighted to respond to Daragh.

He said “I cannot answer all the letters, I get a lot. But it was nice, it was cheeky. We had time that day so I read the letter and I replied.

“I have no problem with supporters of other clubs; it’s a free world so we can choose our club, I don’t think everyone has to be a Liverpool fan.

“I like working for Liverpool and I like the rivalry we have. But I love even more if we can keep that (rivalry) on the pitch. But apart from that they can be happy and we can be happy.

“I hope Daragh is happy, he looked happy in the picture. We try to respond as many as possible.”