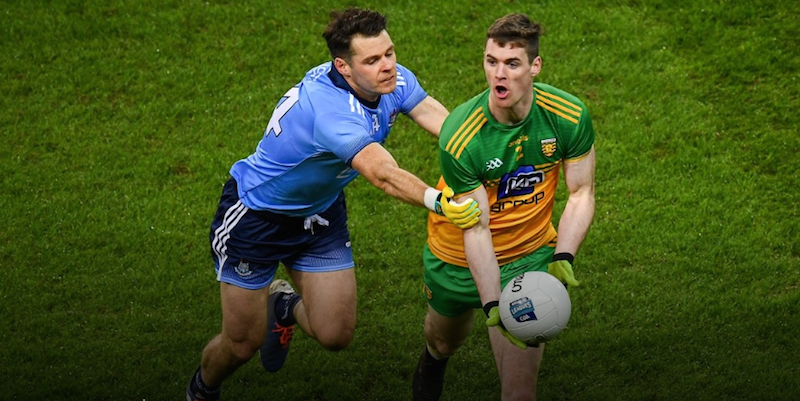 ONCE AGAIN, Donegal allowed a handsome lead slip from their grasp as Paul Mannion’s goal completed a Dublin comeback at Croke Park.

Dessie Farrell’s Dubs came from five down, wearing into Donegal’s edge over the course of the night before finally Mannion pounced.

The goal is one that will haunt the otherwise flawless Shaun Patton. Mannion reacted when Patton couldn’t hold Brian Howard’s dropping ball in the 66th minute. Remarkably, it was the first time in the night that Dublin were ahead.

Like they have done already this year against Mayo and Galway, Donegal were in front, but couldn’t hold on.a

The Dubs, as has been their wont, didn’t blink even when Donegal threatened to add further goals to Hugh McFadden’s sixth minute opener, which for long spells looked to have been the catalyst for a vital win.

At one stage in the closing five minutes the first half, Donegal led by five points, but that lead was eroded and, by the 46th minute, Dublin were only a point in arrears.

Donegal stemmed the flow a couple of times before sub Colm Basquel levelled the game for the first time ten minutes from the end.

It almost felt inevitable and so it proved when three-time All-Star Mannion profited at close range. 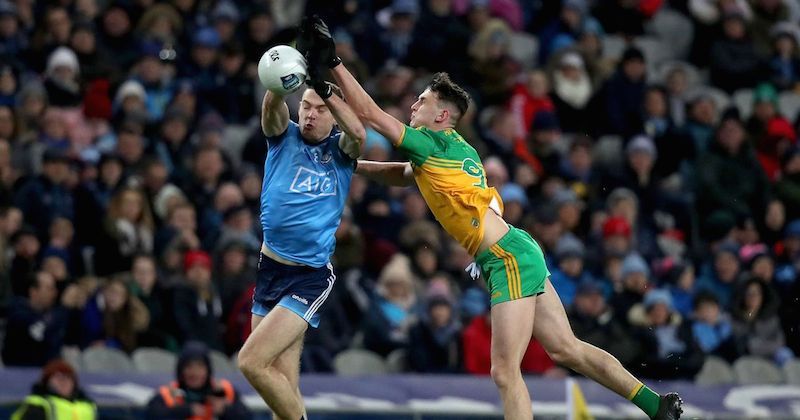 Dublin will feel indebted to Evan Comerford, their goalkeeper, who saved brilliantly in either half from Ryan McHugh and the back-again Patrick McBrearty.

Late in the night, Donegal captain Michael Murphy – once more a formidable presence and the official Man of the Match – was sent off on a second yellow card and a similar fate befell Dublin’s John Small, who was involved in the incident with the Glenswilly ace.

Ciaran Thompson, as he had done in the first, and Peadar Mogan stretched the lead for Donegal – who were two up at the break – with early points in the second half but Dublin roared right back, led by Dean Rock.

Murphy landed a beauty from the left-hand side after a one-two with McHugh, but Rock cancelled it out almost immediately.

Mogan kept Donegal’s fingertips in front, but Donegal had grown firmly into the night when McBrearty was called in for his first appearance of 2020.

Donegal had named McBrearty to make a first start of the year, but the Kilcar man was kept in reserve until he replaced Caolan McGonigle for the final 18 minutes.

After Brian Fenton’s brace had Dublin within the minimum once more, it took a brave save by the Dublin ‘keeper Comerford to prevent McBrearty from widening the margin to four on 57 minutes.

Eoghan Ban Gallagher and Niall O’Donnell worked the opening and a thunderous drive by McBrearty was kept out by the Ballymun stopper.

Donegal had a dream start, going four up within six minutes.

After Ciarán Thompson’s free opened the scoring, Donegal hit a goal when, after superb work by Murphy created a chance for McFadden. Murphy offloaded with three Dublin players closing fast and McFadden set off.

McFadden returned to take the place of Conor O’Donnell as Bonner made just one change to the team that had started the narrow defeat to Galway two weeks ago.

The Killybegs midfielder was the picture of composure as he assessed his options before firing a left-footed effort low into the Hill 16 net.

Sean Bugler and Murphy, from a mark, traded points and Donegal might well have been six up on 20 minutes, but Comerford saved superbly from McHugh.

It was straight off the training ground by Donegal. Patton’s long kick out was flicked on by Murphy into McHugh’s path. With the wide spaces expansive in from of him, the Kilcar man clicked into gear. McHugh played a give-and-go with Jamie Brennan, but Comerford saved.

Patton’s darts were a real feature of the opening half. It has been a big couple of days for the St Eunan’s clubman who passed out as a member of An Garda Síochána in Templemore yesterday.

Patton was on form with his kick-outs a pin-point launchpad for several Donegal attacks, aided though by the presence and poise of Murphy and Michael Langan, and Mannion’s late goal was rough justice.

Brennan slotted a point from the rebound and added another within a minute as Donegal did make some hay. However, a sloppy end to the first half, when Donegal briefly lost their way, allowed Dublin hit back.

The Dubs – who fielded nine of their 2019 All-Ireland winners from the start – hit three-in-a-row from Sean Bugler, Dean Rock and Ciarán Kilkenny to come to within two points at the turnover, when Donegal led 1-6 to 0-7.

As the teams parted, Murphy – who seconds early had been strewn on the turf – voiced his displeasure and Bonner also remonstrated with referee Maurice Deegan.

Before the resumption, Murphy, McFadden and coach Stephen Rochford were again in the ears of Deegan.

A fortnight ago, Dublin staged a stirring revival to come from nine points down to draw with Monaghan right at the end.