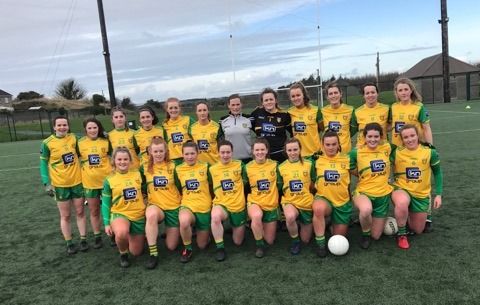 By Declan Rooney At St Loman’s

A goal from Amy Boyle-Carr had gotten Donegal off to a flying start inside the first minute, but Maxi Curran’s side conceded an equaliser from Connolly straight away, and after Connolly gave her side a fourth-minute lead they never trailed again.

Donegal were four points behind at half time and they should have been a lot closer but for some uncharacteristic poor shooting in that opening half.

At one stage they kicked four wides in the space of three minutes in calm conditions, and Sean Finnegan’s side punished them severely.

Connolly was a late inclusion for Westmeath and with Jill Draper dropping deep, she was afford plenty of room in front of the Donegal defence to cause trouble.

After she gave her side that early lead, Caroline Sharkey cancelled it out for Donegal, but three in a row from the home side – two from Leona Archibold and a third from McCarton – gave them a significant cushion.

Struggling to come to terms with the artificial surface, Donegal did well to create a few chances, but Sharkey, Boyle Carr and Geraldine McLaughlin were all guilty of poor wides as half time approached.

And after a McLaughlin shot dropped short, Westmeath countered brilliantly and McCarton score put her side 1-6 to 1-2 clear at the break.

McCarton adder her third point straight after the restart, and a clearly under the weather McLaughlin kicked her first point in the 35th minute of the game as Donegal looked to stage a comeback.

But Connolly scored two points in a few seconds to put Westmeath six clear, and despite three McLaughlin points Donegal always seemed to be second best.

A brilliant score 12 minutes from time epitomised Westmeath’s ambition when goalkeeper Lauren McCormack started a move that went through six pairs of hands before Annie Dolan landed what proved to be the final score, while Donegal’s Kate Keaney was sent off in the final seconds.

Westmeath’s defensive effort was inspirational throughout, and it saw them to the win, which puts them above Donegal at the foot of the table due to their superior head-to-head record.