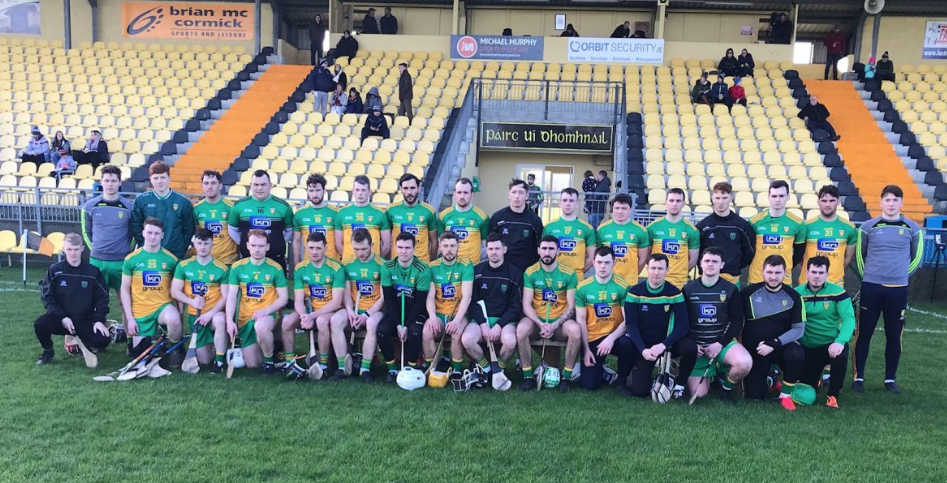 DONEGAL hurlers maintained their promotion push with a third Division 3A win in succession.

PJ McCarron netted in the 46th minute as Donegal recorded a comfortable win over Monaghan to stay on track after a ten-point win.

Eleven minutes into the second half, McCarron took receipt of a diagonal ball. The Buncrana man powered past the helpless Niall Slevin in the Monaghan goal.

Donegal had hit a flurry of five in a row to end the first half five in front after Fergal Rafter drew the Farney level.

McCarron’s major put Donegal nine ahead and, on an afternoon when they didn’t need to hit the high gears, the Tir Chonaill men never looked in danger.

Gerry Gilmore. Declan Coulter (again Donegal’s top marksman), Danny Cullen added points, but the home side will have been disappointed to ship a late goal.

In the final minute of normal time, Kevin Crawley was fed by Peter Treanor and the Inniskeen man applied the finish.

Points from Joe Boyle and Coulter in the opening 14 minutes punctuated a low-scoring beginning to the afternoon.

Two points in the space of 50 seconds by Stephen Lambe, the second of them a monster from distance, drew Monaghan level in the 21st minute.

Fergal Rafter cancelled out a 50-metre free from Declan Coulter with a delicious attempt of his own before Donegal assumed control of things once again.

Ronan McDermott squeezed a majestic effort just inside the near upright in between two from Coulter to stretch the margin out to three.

Boyle hammered over from the right-hand side and, just on the blow of Tarlach Conway’s half-time whistle, Coulter had Donegal 0-8 to 0-3 ahead at the changeover.

Donegal had bounced back from an opening day home defeat against Armagh to defeat Tyrone and Louth, leaving them well poised against a Monaghan side that lost three from three.

Rafter and Ronan McDermott swapped points at the outset of the second half but, in between times, Donegal had a goal chalked off as Danny Cullen’s effort was ruled out for a throw-ball infringement.

McDermott added another – his third of the day – as Donegal took a six-point lead.

When McCarron struck gold, it was curtains. Crawley reduced the severity of the blow, but it was a pretty routine day at the office for Donegal.