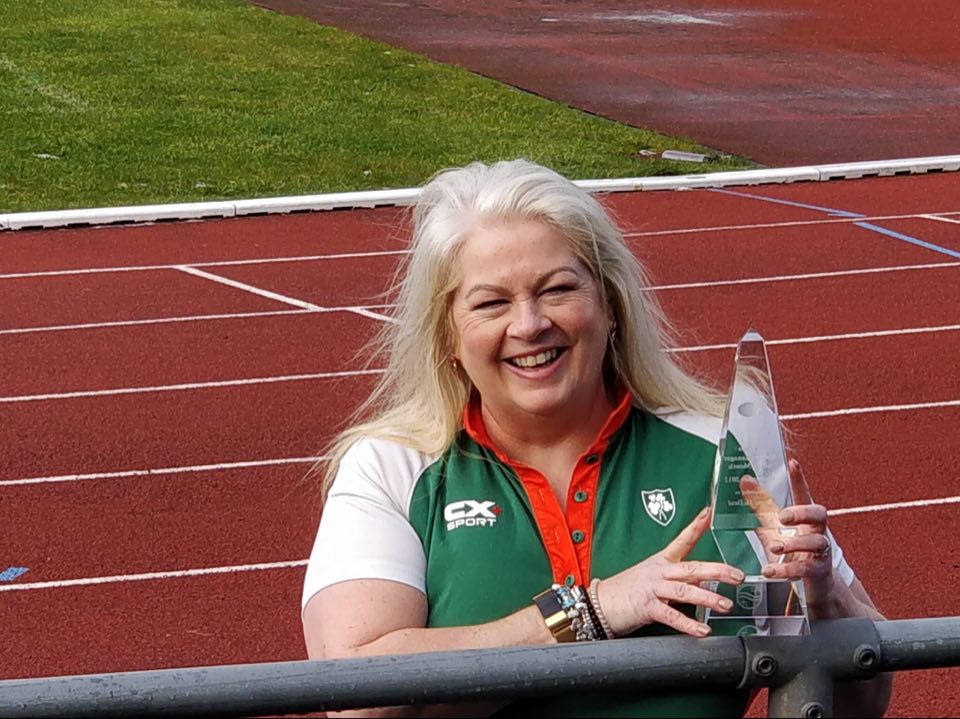 Teresa McDaid getting ready for Tokyo 2020

TWO words come back instantly when Teresa McDaid is asked about her thoughts on the 2020 Olympic Games in Tokyo: ‘Can’t wait’.

The countdown to the biggest sporting spectacle of the year on the planet is well and truly on. In less than 150 days, the eyes of the sporting world will focus on Tokyo which will host the Olympic Games for a second time – the first being back 1964.

It’s been a good start to the year for Letterkenny AC coach Teresa who will fill the role of Ireland’s athletics senior team operations manager for this summer’s Olympic Games.

She was presented with the Signify Sports Manager of the Month Award for December 2019 a few weeks ago after Ireland had its most successful European Cross Country Championships in Lisbon.

“I won that award back in 2013. Out of all the things I achieved and was recognised for in athletics, it’s the one that is respected most outside athletics. The likes of Jack Charlton and former Dublin senior football team manager, Jim Gavin, who won the overall award last year, are previous winners,” she says.

The preparations from an Athletics Ireland and Olympic Council of Ireland point of view for Tokyo 2020 began in Doha in 2019.

“The IAAF World Athletics Championships there last year were like a dress rehearsal both in terms of conditions and how we, as a team, would prepare and help support athletes in their final preparations and final executions of their performances.

“This would be particularly relevant to the walkers and marathon runners.

“So, from as far out as last September, arrangements were being made in terms of camps and travel. Things have taken a bit of change in direction with the marathon being switched from Tokyo to the northern Japanese city of Sapporo because of concerns about the heat.”

This change of venue poses a logistical challenge for Teresa and her team.

“How are we going to get up there? Is there going to be a camp? Will there be another Olympic village? These are all questions we will need to address and a lot of things need to be finalised,” she adds.

Going to the Olympics with Ireland’s team of athletes has been on Teresa’s radar for quite a while.

“It has always been my dream to go to the Olympics. I have come quite close to it in the past in a personal coach capacity in London when Mark English narrowly missed out on qualifying for the 800 metres in 2012 by half a stride. So, to go to the Olympics this year is a massive and another goal ticked off my list.

“As far as I know, I will be the first woman to fill the role of senior team operations manager for Ireland’s athletes at his year’s Olympics. In the year that’s in it, which is encouraging more women to be involved in sport, it’s nice to be going to the Olympics in such a role. It’s very fitting and it’s also a privilege.”

Teresa says she’s delighted to be involved in the Donegal Sports Partnership’s programme aimed at getting more women back into sport at various levels.

“I’ve also been asked to be a mentor on the Athletics Ireland coaching and mentoring programme for women. When you reflect on those invitations, it gives you an opportunity to reflect on where you have come from yourself.

“We tend to keep moving all the time and always looking forward. Sometimes it’s nice just to look back. I’ve done a lot and certainly the Olympics this year will be a very good finish to the year. There’s also the European Cross Country Championships to look forward to in Dublin in December which will be fun as well.”

Ten years ago, Teresa made a major decision.

“These are busy times and exciting times. I suppose for me I took what some people thought was a very strange or rare step when I went for a voluntary redundancy package from the HSE in 2010.

“I had a very good, high level job and left it to follow my dream. I certainly have no regrets about that move and the experiences I have had since have been absolutely amazing. You make these decisions and I was fortunate that things worked out for me,” she comments.

Teresa is at the stage in life where she’s fortunate to be able to choose what she does.

“I had a lot of grounding in the skills I had with the HSE, undoubtedly. And they were very transferable skills which I was able to bring into coaching and team management. I’m also part of the high performance committee and coaching committee of Athletics Ireland.

“Obviously, I am still actively involved coaching at different levels and remain very active at club base. For me it’s always been about balance – I’ve always liked that balance of being involved at club athletics and high performance athletics. One contributes to the other and one balances the other out and gives me a better grounding.”

Teresa is part of a team that provides a service and within that team everyone has their roles and responsibilities.

“The big thing now, I suppose, is the cancellation of the World Indoor Athletics Championships which were due to be held in Nanjing, China in March.

“The focus for coaches and athletes is qualification for the Olympics. Qualifying for the Olympics is a little bit different that it was in the past. I’m also a national team selector.

“Our first outing is in May when we select the road events, as in the walks. As a selector, you can only work within policy which is well documented.

“As regards the marathon, the whole impact of the Nike shoes has affected who has got the qualifying time and who has not. The IAAF wanted to have 80 people invited to the marathon. Their expectation was that 50 of those would get standard, with the rest being taken from the ranking system.

“There are actually people with the standard who are not in the top 80 and that has made an unexpected impact. It all makes it very interesting ahead of the selection process. When we are on camp and at competition, that is when my role will really kick in.”

The Letterkenny coach is looking forward to preparing for the Olympic Games.

Since taking over the role of operations team manager in the last couple of years, she’s had a couple of challenges which she’s met head on.

“I’ve come out the right side of them, so it’s so far, so good. If you take the likes of the appeal lodged for Mark English at last year’s European Indoor Athletics Championships in Glasgow, which was successful and secured him a place in the 800 metre final in which he won a bronze medal, it’s very rewarding to think you are doing something you love and is having a positive impact.”