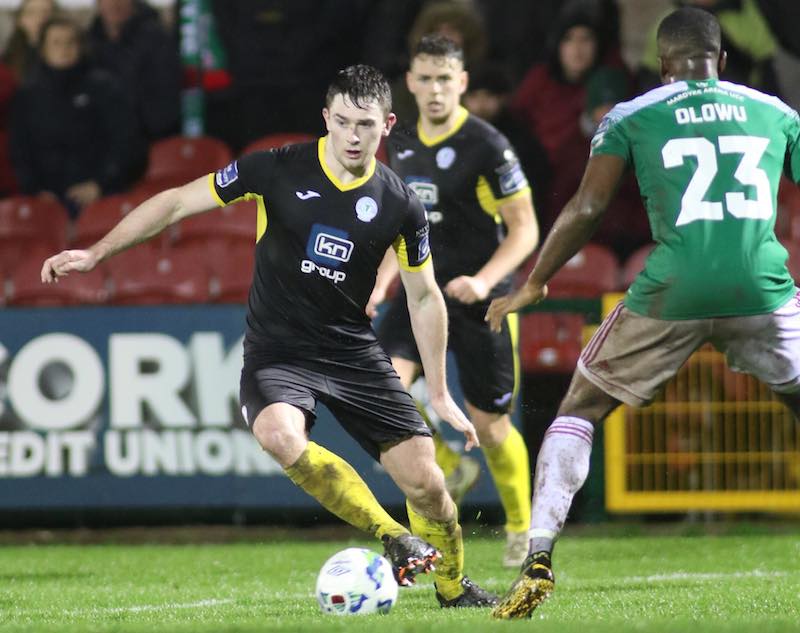 FINN Harps fell to a controversial first defeat of the season at Turners Cross tonight.

Alec Byrne’s header on 56 minutes gave Neale Fenn a much-needed first win of the campaign on an eventful night in front of 2,367 by Leeside.

Byrne won it for Cork, but that only tells part of the story as Harps will curse the moment, late in the first half, when Alexander Kogler was denied a debut goal.

Eleven minutes after the restart, Byrne nosed in to head Dylan McGlade’s in-swinging corner past Mark Anthony McGinley from inside the six-yard box.

Cork had considerably upped the tempo after the break and Harps, still reeling from the incident that saw Kogler’s attempt ruled out, will have been disappointed to concede in such a manner from a set piece.

The game’s big moment, undoubtedly, came in the first minute of added time at the end of the first when Kogler looked to have put Harps in front.

Austrian Kogler – who was only given clearance to play yesterday by the FAI – was included from the start and he was off celebrating a debut goal when he was, rather farcically it must be said, stopped in his tracks.

After initially awarding the goal, referee Neil Doyle, following a consultation with his assistant Darren Carey, chalked it off.

Kogler slid in to finish after Liam Bossin couldn’t hold Ruairi Harkin’s tester from 25 yards. Kogler collided with Bossin and, after a delay of almost ten minutes, the Cork ‘keeper was replaced by Mark McNulty. 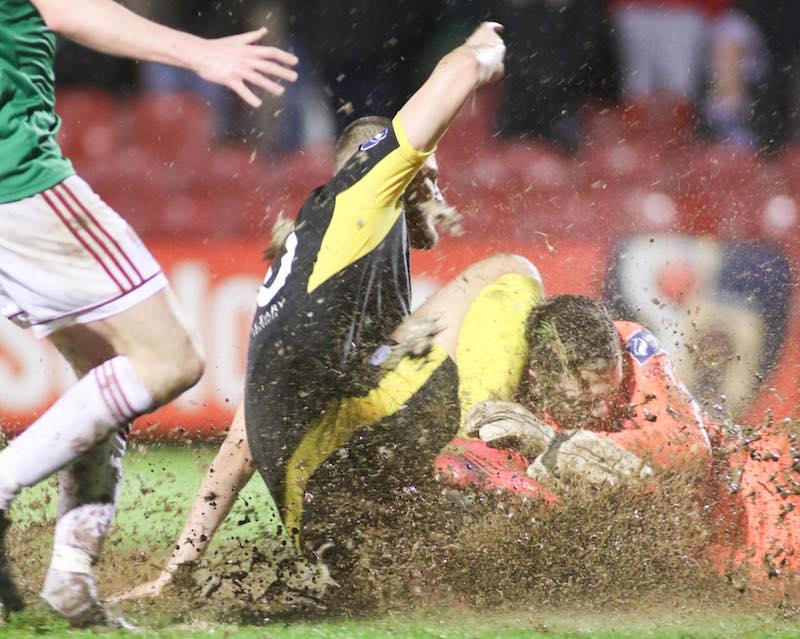 All the while, Harps were livid with Horgan particularly irate as he let fly to fourth official Ray Matthews, while Harps goalkeeper Mark Anthony McGinley made his way the full length of the pitch to voice his displeasure.

Kogler, added from Grazer AZ in the Austrian Second Division in recent weeks, was thrown straight into the starting line-up, while Harkin was given a first start of 2020.

Tony McNamee, who impressed in last week’s draw at Derry, dropped to the bench with Leo Donnellan.

Harkin twice tried his luck in the early exchanges, dipping narrowly off-target with a decent attempt from distance before drilling a free kick wide of Bossin’s right-hand post.

In driving rain, Harps started with good promise and Dave Webster saw a shot blocked for a corner after a Barry McNamee pass through the needle’s eye was cut out at the vital moment.

Cork arrived into this with their confidence brittle, having shipped ten goals across a three-game losing streak.

Boss Neale Fenn insisted that his side had to ‘take the game’ to Harps and they delivered a real warning on 13 minutes when Dáire O’Connor’s cut-back after a marauding run down the right invited an attempt by Dylan McGlade, but his first-timer didn’t trouble McGinley. 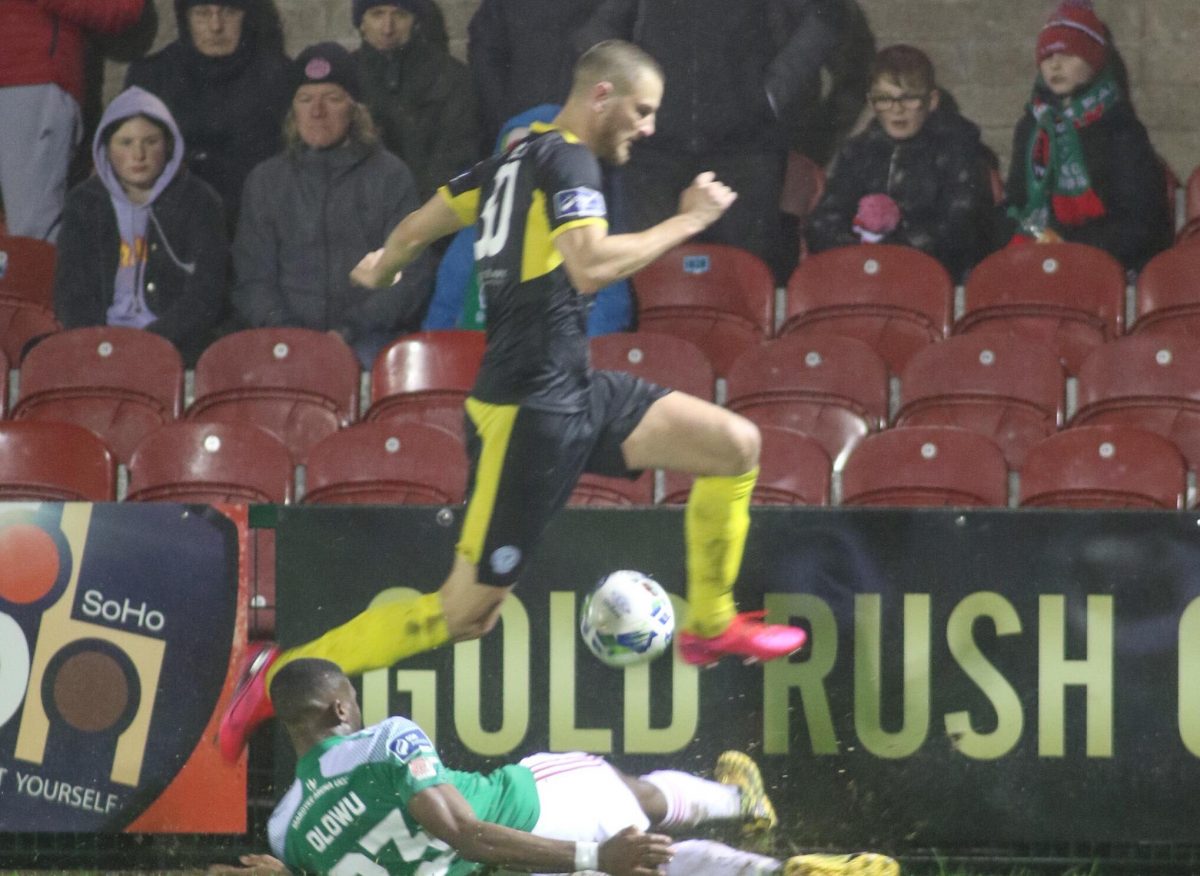 On the half-hour, McNamee – playing against the club he represented in 2018 – slipped O’Sullivan through, but he was denied by the feet of Cork ‘keeper Bossin.

McGinley did well to save, and hold a low free from McGlade after O’Connor was fouled by Sadiki.

Ninety seconds into the second half, Deshane Dalling, available again after a suspension, flashed wide.

Dalling was thwarted by McGinley’s legs before Byrne headed the hosts in front.

The goal – Cork’s first of the season – took the wind from Harps’ sails, but it took a goal-saving block by Ronan Hurley to deny Kogler, who got on the end of a centre by Ryan Connolly.

Dalling broke down the other end but the mud bath in the goalmouth came to the visitors’ rescue. 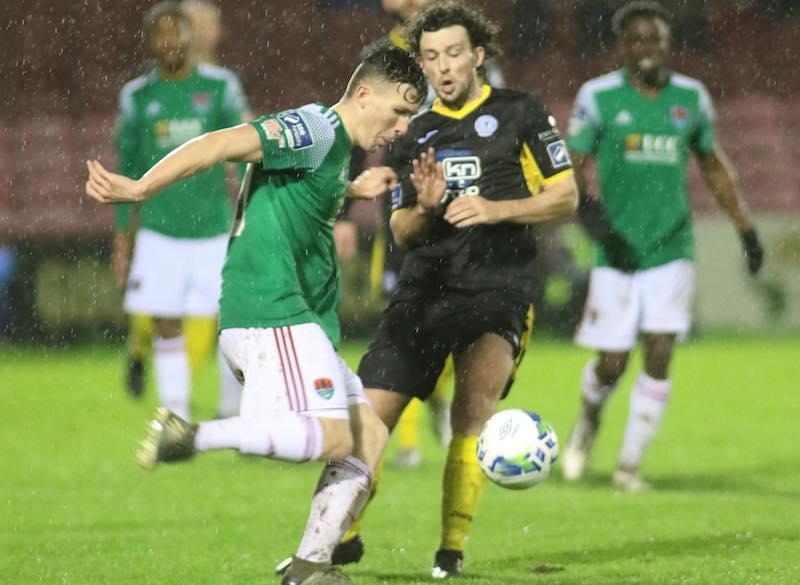 Seven minutes form the end, Dave Webster riffled wide as Harps, who gave a debut to lively striker Cameron Saul for the last 17 minutes, looked to salvage something.

It will be a long road home and a difficult defeat for Harps to process as their wait for a win in Cork – going back to September 1996 – continues.