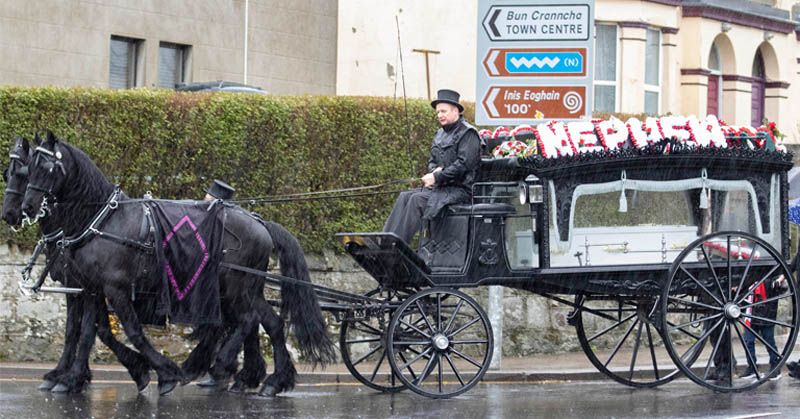 A funeral for a young boy killed when he was struck by a van in Buncrana has heard how he was given the Sacrament of Confirmation just hours before he passed away.

The 11-year-old had been happily playing with a pal when the tragic accident happened just after 5pm on Friday evening.

Heartbroken mourners held each other tight at his funeral at St Mary’s Oratory in Buncrana this morning.

Fr Walsh said: “St Mary’s Oratory here in Buncrana has seen many funerals – all of them sad, some of them tragic. There is a special tragedy in the death of a young person. There is nothing we can say or think or do that can measure up to the loss being experienced by Dylan’s family.

“Dylan was in our midst. Like all young people, he rejoiced in life, looked confidently to the years ahead, dreamed of the way things might be. Now he is asleep.

“At a moment like this, the evident grief which clutches young and old alike testifies to a people’s sense of loss and their loving support for this family.”

The town of Buncrana came to a respectful halt today as Dylan’s horse-drawn funeral cortege made its way through the town.

Shops closed their doors and people bowed their heads as the funeral cortege made its way through the town.

Dylan’s family, who left Dublin a number of years ago to begin a new life in Donegal, walked silently behind.

At St Mary’s Oratory, pupils from Scoil Iosagain, formed a guard of honour at the gates of the church.

Fr Walsh said there was one prayer in the hearts of those who loved Dylan but there are many questions in their minds.

He said “Could we not have Dylan back? Could these extraordinary and unbelievable days be wiped out? Could we awake from this nightmare? Yet, all we can offer, now, is a sense of shared loss, a touch of comfort, an assurance of love. Anything else we can do or say is sadly inadequate.

“There is the loss of a young life; there is the well-up of sympathy within us for the family who mourn. There is special sympathy – a special love, a special feeling – for Dylan’s parents, Colin and Sabrina, his brothers Jake, Shane and Kyle, his sister Layla, his grandparents, uncles and aunts and all his relatives and friends.

“In the book of Wisdom, penned by someone a long time ago, we find someone obviously trying to cope with a tragedy very like what we have seen over the past number of days. He wrote those words, helped by God, for our comfort: “The good person, though he die before his time, will find rest. For the age that is honourable comes not with the passing of time, nor can it be measured in terms of years.

“Young or old, it is understanding that is maturity; a good life this is fulfilment.”

Fr Walsh told mourners how many people measured life so often by the number of years and its duration but this was not always the way.

“Let’s forget about numbers and length; let’s think more about accomplishment. Think not of what Dylan could have done or would have made of his life; think rather of all he had done and the light and love he has left behind.

“Dylan thirsted for life here on earth. His parents delighted in his exceptionally enquiring mind and in his sponge-like capacity to soak up facts and information. He was such a wonderful son and loving brother, doting on his infant sister, Layla, in particular. He loved animals, even his dinosaurs, and knew each one of them by name.”

He said that Dylan loved playing Lego at school and was a much-loved classmate and valued pupil for Miss Harkin and the other teachers he had had over the years.

He added “The caring nature that he showed towards his family at home, was really brought out in his enthusiastic participation in the Roots of Empathy programme and he loved the time spent with the babies in it. This lover of Manchester United was also an esteemed member of the Under-12 team of Buncrana Hearts. So we can resolutely say that Dylan truly lived life to the full.”

Fr Walsh continued: “Life is very short. However, a tragic death like this teaches us suddenly and painfully that life, too, is important. There would be no such sense of loss and grief unless we saw that life is very precious. When a life is torn away from us, then we see that our friends, people, life are all that matter. We don’t know why Dylan had to go to Jesus so soon. A prayer in the liturgy to receive the remains has the words, “Now in his wisdom, he has called him to himself.”

We do not know what this wisdom is. We cannot trace its logic, its thoughts and purposes and answer the question, ‘why?’ For us who believe, we only know that a plan and wisdom are there and that one day their truth will open to our uncomprehending eyes. And it is not as if it has all ended.

“On Friday night, Dylan received the Sacrament of Confirmation in Altnagelvin Hospital, taking the name Anthony, and received the fulness of the Holy Spirit. Yes, his life has taken a different shape and a different form, but his family have not lost him. He is just with them in a different way, but he is with them always.

“On Sunday, God said: ‘Dylan, I have loved you from the first moments of your life. Welcome home! You are no further from your mother and father and brothers and sister and friends than I am, and I am so close to you all.”

Little Dylan’s funeral hears how he made his Confirmation hours before he passed was last modified: February 28th, 2020 by Stephen Maguire
Facebook0Tweet0LinkedIn0Print0
Tags:
buncranadylan kellyfuneralRIP