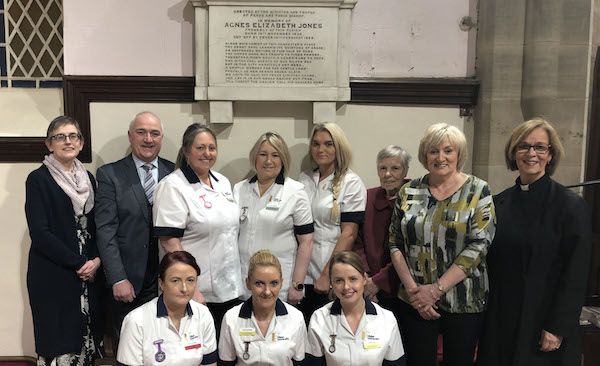 A parish in Fahan recently celebrated the life and work of world-renowned nurse, Agnes Jones and the 45th Anniversary of the foundation of the School of Nursing at Ulster University’s Magee Campus.

Students and staff from the Ulster University School of Nursing were among the participants in a service featuring St Mura’s Choir directed by local historian, Anne Moore.

Rev Judi McGaffin, who led the service said of Agnes Jones: “She left us a wonderful legacy of healing and of education”.

An oration to Agnes Jones which was written in 1868 by Dean Alexander Bishop of Derry and Primate of all Ireland was read by Pat Deeny, Senior Lecturer in Nursing at Ulster University, Magee.

“In this, the 45th year of Nursing at Ulster University and the WHO Year of the Nurse and Midwife, we invite anyone with an interest in Agnes Jones to contact Pat Deeny, Senior Lecturer in Nursing at the Magee Campus to learn more about her purposeful life and legacy for modern day Nursing”.

Agnes Elizabeth Jones (1832 – 1868) of Fahan, is recognised as the founder of Public Health Nursing.

She is acknowledged for her work with those who suffered during the famine in Dublin, Derry and Donegal. In 1862 she later joined Florence Nightingale’s School of Nursing in St Thomas’s London and eventually became the Matron at the Brownlow Hill Infirmary in Liverpool.

At the time, Liverpool was inundated with refugees from the Irish famine and dealing with a major outbreak of typhoid, dysentery and other communicable diseases. Sadly, Agnes herself died aged 35 years from typhus in 1868.

The graveyard in Fahan, is one of three sites dedicated to the memory of Agnes Jones, CBE. She is also memorialised at The Oratory, St James Cemetery, Liverpool and at the Lady Chapel at Liverpool Cathedral in a beautiful stained-glass window.

Existing and potential students of nursing will no doubt be inspired by this local heroine. At Ulster University, we have delivered nursing programmes for over 30 years, and our courses provide excellence in teaching and research with innovative approaches to learning.