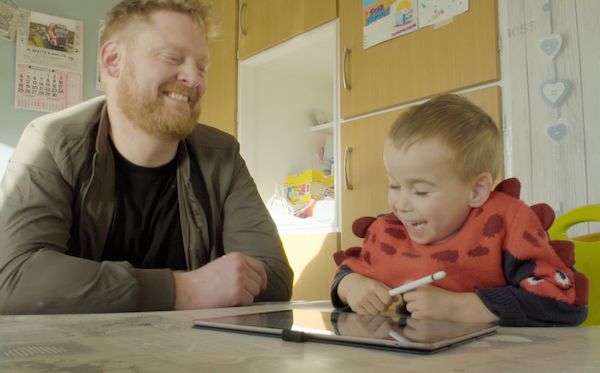 A young Raphoe lad whose parents were told he would never have a ‘normal’ life after losing both legs to a rare spinal condition has defied all the odds.

Amazing James Smyth now leads an amazing life which has just got even better.

The seven-year-old has just been given a prototype ride-on kart specially invented for him which has now given him back his childhood.

James’ parents, who tonight feature on RTE’s new heart-warming invention series, the Big Life Fix, were devastatingly told he would never sit up and have any quality of life when he was born with Caudal Regression Syndrome, which affects the lower spine.

But the extraordinary boy proved doctors wrong with his remarkable determination to get around on his hands at his home but was never able to play independently in his sloped garden.

He used a makeshift kart in the playground at his mainstream school as his parents were unable to find any mobile device for James because of his small size but he had to push it forward by putting his hands on the tarmac.

But the remarkable RTE series put the task of creating a mobile all-terrain kart of the young boy to inventor Trevor Vaugh who has developed a number of world-first surgical devices and currently heads the Innovation Lab at Maynooth University.

After a year of painstakingly researching and testing prototypes with the young family and dinosaur-mad James, the team dreamed up the ride-on Dino Kart which allows the young boy to speed around his huge back garden and his school playground using handheld controls.

“I can’t put words on how much it means”, said his emotional mother Joanne.

“It’s a means of giving James independence. To James it’s the difference between being a child and not being a child.

“I’m amazed at how well it goes on the grass. I’m watching something I never thought I would see happen. For him to go and have a wander around the garden and come back up again it’s unbelievable.”

The Big Life Fix which was filmed over a year challenges a team of leading designers, engineers, computer programmers and technology experts to create inventions to transform people’s lives.

In the RTE One series, James’ mother, Joanne, told how her son was given a grim prognosis by doctors after he was born.

“We were told he wold more than likely never do anything or be independent or never sit up or have any quality of life.

“I never actually met again the doctor who told me he would have no quality of life but I would just love her to see him and say ‘this is the child you wrote off when he was a day old and look at him’.

“He had this determination and attitude. Nothing ever gets him down.”

Her son had to have his legs amputated in recent years as his condition which results in the abnormal development of his lower spine meant he was never able to move his legs.

“Realistically he was dragging dead weight and it was making things difficult for him.

“I don’t want him to become reliant. You set out to teach children to be independent people and to do things himself.”

Before this was given his special prototype dino cart he was getting around on the ground by using his hands but when inventor Trevor Vaugh noted it was cold and hard on the young boy’s hands.

“He’s always used his hands for walking”, said his mother.

The top inventor is seen making numerous strips to Donegal to watch James in the classroom, in the playground and out his back garden at home before coming up with his design.

The kart was modelled as a dinosaur and is able to securely being the boy across rough terrain.

“There is something in me that wants to give him something that no one else has, a mild superpower that allows him to move better and freer.”

James is seen clapping his hands in delight and whizzing around his lawn in his dino kart when the dinosaur-themed kart which makes dinosaur noises was finally delivered to his home.

On a personal level to be able to create something that actually makes their life a bit better. That’s massive.”