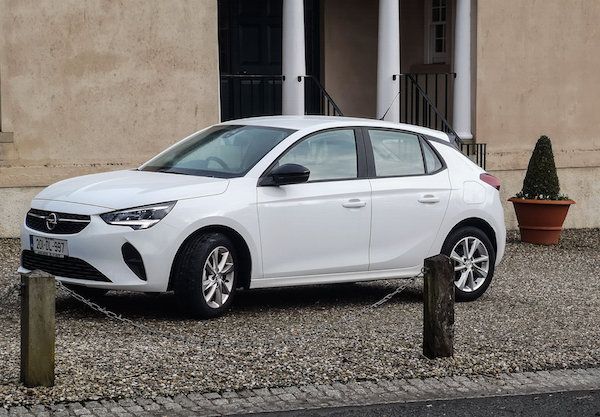 DD Motoring: The next journey for the New Corsa

This week we look at a family car in the small car motoring sector.

Now in its fifth generation which means that its name will have that familiar ring that brings back motoring memories.

The new Opel Corsa which was officially launched before Christmas has become available in the showrooms this last six weeks or so in Donegal.

Everyone has a Corsa story in them, also known as a Nova in the sister company in Northern Ireland, from Vauxhall.

I am old enough to remember when the very first generation of the Opel Corsa arrived in Ireland. Over 13 million have been sold since then, fitting so many types of motorists.

For most of them might have been the introduction of owning your very first car. Those are the memories that stick with you the longest time, the rawness of getting that car ready for the road, your own independence.

A view of the high end interior of the the new Opel Corsa which is available in the entry model. Photo Brian McDaid.

This week we called out to Manor Motors and headed off in one of the latest generation Corsa’s which only arrived off the car transporter and a new set of 201 DL number plates on it ready for a road as a demonstration model.

Looking at the shape of the new Corsa it looks all grown up compared to the very basic shape the very first Corsa looked like.

A Corsa is one of those cars that always had a personality to it and any of the five generations of it had a face of headlights and grill that just looked like of the style of the year that car lived through.

Even putting together this article two Opel Corsa’s remind me of people that had this wee car are no longer with us. That’s the thing about the Corsa down through the years, they were very serviceable and parts were very reasonably priced and plentiful so they were the choice of so many starting up.

This new Corsa looks a lot wider and lower to the road than the model it replaced but in measurements it’s not. It’s all in the overall design that makes this car look so well. It now has the newest and slickest headlight cluster like the rest of the Opel range in favour of the Old bigger headlight that the previous generation looked through.

The grill is also a wider flatter look to it giving the car more of a posh look to it rather than the fun look a Corsa had over the generations. Inside behind the wheel, this car has a lot more room than you would imagine with plenty of headroom even for someone the shape of myself!

On the Road with the all new Opel Corsa this week. Photo Brian McDaid.

You’re not long on the road to you hear the unmistakable sound of the three cylinder petrol engine. Mine had 75 BHP under my right foot which is plenty and that infectious sound of the engine encourages you to push the car on, which I did.

One of the biggest moves for the Corsa range is moving it away from a three-door model to a five door only model. This is the trend with a lot of big car makers now especially if the share the floor plan of the car with other brands and with Opel changing from a GM owned to a PSA parent company this platform is also shared with the Peugeot brand.

Driving my test car which this week I found it hard to believe that it was the entry model to the Corsa range, because of the high level of finish of the trim, lovely leather multi -function steering wheel, adaptive cruise, lane correction mode (or whatever the posh name for that is ) stop-start, blue tooth phone connection, all standard making these new Corsas very upmarket

The jewel in the crown for this new Corsa is what Opel are planning for it going forward. There is and all-electric version called the Corsa E, which will look exactly the same on the road as the petrol version.

Opel has managed to fit everything into the same car but not only that but an indication of how serious Opel is taking the Corsa as it’s not only going to be their introduction into all-electric cars. They are going one step further they are also producing a groundbreaking rally car based on the electric version.

This wee car just has the pulses racing, it a five-door exactly like the road-going version and will be a part on the next generation as electricity is introduced to the rally world. The Road going version of this car is on the way to the Opel showrooms as we speak.

A view of the high end interior of the the new Opel Corsa which is available in the entry model. Photo Brian McDaid.

Meanwhile, looking at the video of the rally version Opel have included nostalgia with the yellow Opel crest over a black background in the cars livery which was the same colours of the old works Opel Kadette GTE’s of decades ago.

It’s not the first time Opel or Vauxhall have promoted a production car through a rally version, think of the Old Opel Ascona and Manta which all had a rally version but in this new chapter Opel are going a step further in introducing a spark though electric to their wee Corsa to the rally world.

Back in the real world the New Corsa opens a new chapter with its 5th generation version which is completely new to what we’re used to but still pulls that heartstrings to the past.

DD Motoring: The next journey for the New Corsa was last modified: March 4th, 2020 by Brian McDaid