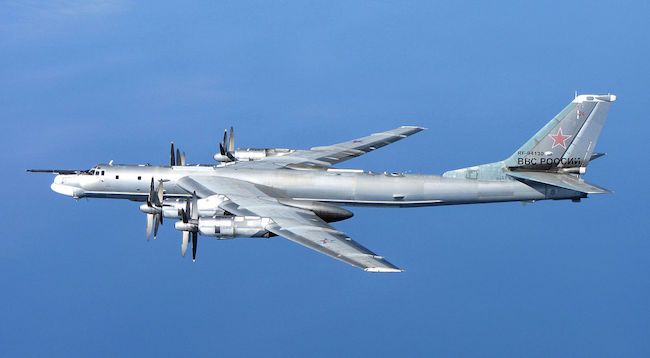 London’s Ministry of Defence (MoD) confirmed quick reaction Typhoon jets launched from RAF Lossiemouth in northeast Scotland, and RAF Coningsby, in eastern England, in response to the Russian proximity to Derry and Donegal.

RAF fighters were launched “early in the morning” and again in “mid-afternoon”, according to an MoD spokeswoman.

Details of the operation remained unconfirmed during the day until the fighters returned to their bases.

Both RAF Coningsby in Lincolnshire and RAF Lossiemouth are the UK’s two designated quick-reaction-alert stations that protect United Kingdom airspace.

Three pairs of fighters were scrambled from both stations during the early morning approach of Russian aircraft.

Fighters were launched again from Lossiemouth during the second incident some hours later.
‘Routine response’

An airforce spokeswoman told the Irish Times: “We can confirm that RAF quick-reaction-alert Typhoon aircraft were launched today from RAF Lossiemouth and RAF Coningsby. This was a routine response to Russian aircraft approaching UK air space and was co-ordinated with several other Nato allies.”

The spokeswoman said the fighters “intercepted” before the Russian aircraft entered British airspace around the north of Ireland.

The MoD could not confirm the Russian aircraft involved in the incident, but it is understood they were Russian TU-95 “Bear” bombers.

It was not immediately known how many were involved.

After a similar incident where Typhoons were scrambled twice in one day last August – before the United Kingdom left the European Union – in response to Russian Bear bombers approaching British airspace, the MoD said at the time that Russian aircraft “frequently attempt to test Nato’s level of readiness” as well as conduct “intelligence-gathering missions”.