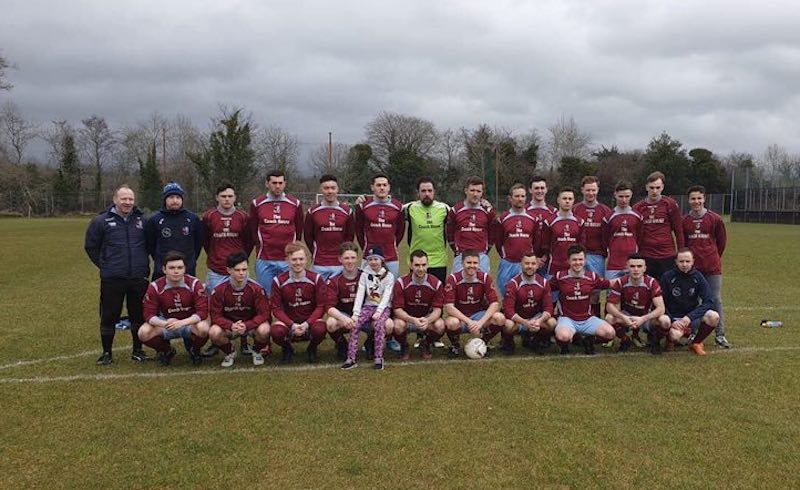 THERE was plenty of drama in the Donegal Saturday League yesterday with action in the Voodoo Venue Cup as well as the League – with Donegal Town Reserves (above) clinching the Glencar Inn Division One title. Here’s a full round-up.

Castlefin are through to the quarter finals of the Voodoo Venue Cup after defeating Kilmacrennan on Saturday.

Kilmacrennan took the lead in the 20th minute when Michael McLaughlin scored from a Kevin O’Donnell pass. Castlefin equalised in the 38th minute when a Reece Gallagher cross was put into his own net by a Kilmacrennan defender.

Both teams had chances to score in the second half but it was the home side who scored the all-important goal in the 82nd minute when a Lee Kennedy through ball found Steven Roulston who shot to the corner of the net from the edge of the area.

This game was very scrappy with no clear changes in the first half. In the second half Strand had a few changes but didn’t test the Oldtown goalkeeper.

Oldtown took the lead on 77 minutes.

Strand pushed for the leveller and got their reward when Shane O’Donnell scored at the back post to level the game.

Ballybofey slipped in their hunt for a play-off spot when Cranford visited Dreenan on Saturday afternoon.

Conor Doherty gave them a timely advantage when he scored on 40 minutes. Cranford started the second-half well and were awarded a penalty on 55 minutes which Conor Shields converted. Neither side could find the net for the remainder of the match and it ended level.

A point apiece is of little use to either side but Marty Patton’s United are still in the hunt for that third place which would see them in a Promotion/Relegation play-off.

Dunlewey edged this game against Copany 1-0. The game was played in windy conditions though both teams, to their credit, tried to play the game on the deck.

Dunlewey’s goal came late in the first half, a Brendan McGeady cross finding Chris Cannon unmarked for a clinical finish.

Dunlewey had the wind in the second half and made the most of the advantage, hitting the woodwork a few times though Copany still proved a threat on the break.

Ethan Mangan particularly put in an impressive performance. There was to be no more goals though, the game finishing 1-0.

A top effort from both teams.

Drumoghill started well and were rewarded midway through the half when Paddy Ryan reacted quickest in the box to slot home after a Gareth Temple shot was saved.

Drumoghill continued to press and were unlucky not to add to their lead by half-time with the wind in their favour.

Drumbar equalised 10 minutes into the second half after they broke from their own half. Paddy Ryan restored Drumoghill’s lead as he again reacted well in the box, again to fire home.

Drumoghill should’ve added to their lead with Evan Gibbons going close and Gareth Temple hitting the bar twice before Drumbar equalised straight from a corner with 10 minutes left.

Ethan McCready won it for Drumoghill minutes later when he fired home from the spot after Dylan McElhinney was taken down in the box.