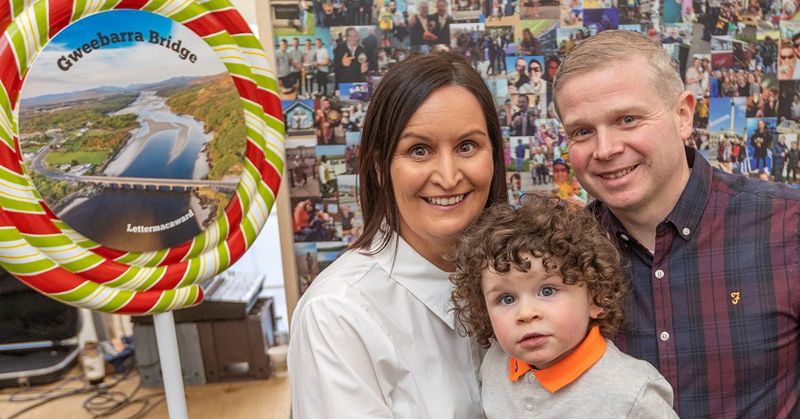 A Donegal couple who designed a special product following the loss of their first baby has been overwhelmed by the worldwide support for their special message.

Joe and Michelle Gallagher’s ‘Leitir Lollypops’ have been a popular purchase in their XL store in Lettermacaward. But the meaning behind the rainbow sweets was kept mostly quiet until last weekend.

The ‘Leitir Lolly’ was Joe and Michelle’s way of remembering their precious first born, Patrick Joseph, who passed away in May 2015.

Through the arrival of second son Nathan in June of 2016 they became familiar with the term ‘rainbow baby’, which led them to source the ‘Leitir Lollypop’. They sold the pops in their store as a quiet way to commemorate Patrick Joseph’s life and memory in a very real way.

By selling the lollypop they hoped to raise a modest amount for the charity Sands, the Stillbirth & Neonatal Death Charity and generate some awareness of a charity that had helped them through their darkest days. They couldn’t have imagined just how far the ‘Leitir Lollypop’ and their message would travel.

Since they began selling the rainbow coloured lollypop it has been photographed in more than 100 countries worldwide and a series of celebrities and sportspeople have been photographed with the rainbow lollypop, from Vogue Williams and Spencer Matthews to Tomas O Sé, Daniel O’Donnell to former Ireland rugby coach Joe Schmidt.

Approximately 1,000 lollypops have been sold, raising more than €3,000 to date, with all proceeds donated to Sands https://www.sands.org.uk/.

A mural featuring more than 250 photographs of people with a Leitir (rainbow) Lollypop was unveiled at the Joe and Michelle’s store on Saturday.

Speaking at the launch, Joe finally revealed the meaning behind the now global phenomenon to an audience that included members of the Donegal senior football team, their manager Declan Bonner and Country & Western singer Cliona Hagan.

“When we lost Patrick Joseph we really wanted to do something meaningful for him and to raise awareness of the Sands charity and all they do for families like ours,” explained Joe. “So many of our friends have lost their little babies and this is our way of remembering all the little angels now in heaven.”

The idea behind the mural of photographs that will dominate a wall in Gallagher’s XL is to get the rainbow lollypops to reach as far as possible across the world where those little angels up in heaven won’t ever get the chance to go. The response has blown Joe and Michelle away.

“We thought we’d get a modest number of photographs back from people but the response has been phenomenal,” says Joe. “We have more than 500 photographs from all over the world, with 250 selected for the collage. We’re delighted with the awareness we have raised for this cause and hopefully we can go on making a positive contribution.”

Joe and Michelle will continue to source and sell the Leitir Lollypops at their XL store with all profits donated to Sands.