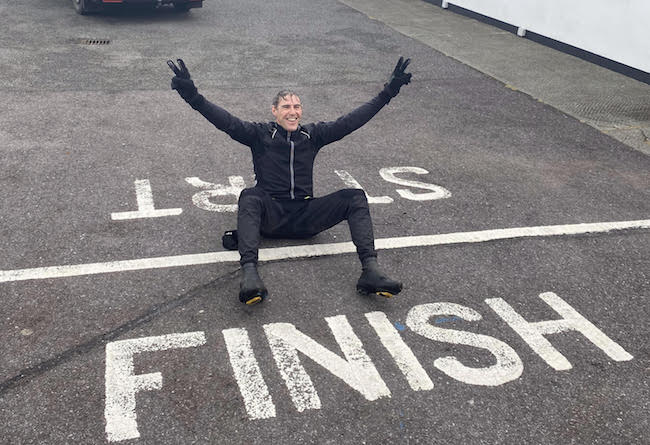 Ultra-endurance athlete Jason Black has just set a new record by becoming the fastest person by bicycle to cycle from Malin Head to Mizen Head non-stop.

The Letterkenny man claimed the World Ultra Cycling Association title over the weekend with an amazing time of 22 hours and 59 minutes.

He ripped through Ireland in tough headwinds and extreme wet winter conditions to arrive in Mizen Head the most Southerly tip of Ireland the next day after 566 gruelling kilometres.

Black is no stranger to the endurance world and used the record ride as preparation for his rookie 5,000km Race across America on 16th of June as an ambassador for the Irish Red Cross.

He was supported by his family and friends as crew led by his wife Sharon, Laura, Billy, Sister Dervla, Terry Mc Gill, Martin Irwin and nutritionist Dr Fionn Mc Swiney.

And he couldn’t have done it without his sponsors – Mason Cycles, Hunt Wheels, Team Donegal Oil, Qilta Recovery and The Great outdoors.