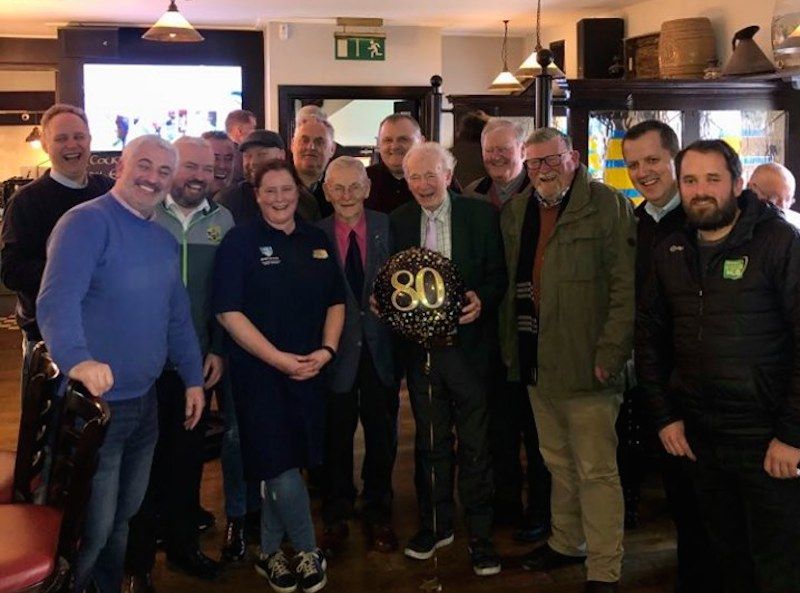 The Brewery Bar on Letterkenny’s Market Square has been the haunt of the (in) famous group of local football aficionados dubbed at one point in time the ‘lunch bunch’ for many years now.

Picture: Victor Fisher celebrates his 80th birthday in the company of friends at The Brewery Bar, Letterkenny, this afternoon.

The ‘lunch bunch’ is just one of the many groupings Victor has been associated with down the years. One constant in his life is his love of people; most especially the conversations he has held and continues to hold.

This afternoon, the tone was as terse as ever at times, but a full-strength squad ensured that Victor’s birthday bash became the big talking point.

“I’m in great health, thank God – you can never underestimate your health,” Victor says in a since-quietened corner of the Brewery, eyes lit after the fuss.

Born in 1940 in Ramelton, Victor moved to Letterkenny with his family when he was just six years old.

The Fishers lived in Rosemount in what was the station house on the old railway line.

“Times were hard back then,” Victor reflects..

“We had the old double railway gates at the front of the house. We used to open them and go around, after the trains had passed, lifting the coal that fell off.

“Times were different then. We had no inside toilet in the house and I have clear memory of my mother using an old wash board to do the washing in the house.”

His mother, he says, retained a great grá for her home town of Ramelton.

Victor, for his part, went on to serve three times as the Mayor of Letterkenny and the growth of his town has amazed him as much as filled him with delight.

“I’m very much a proud Letterkenny man,” he says.

“I’ve seen massive changes in Letterkenny. The town is almost unrecognisable now from when I first came here. Letterkenny is just a small city now in all but name. I’m delighted to see how the town has come on.”

From a strong Fine Gael family background, Victor joined Fianna Fáil in 1969, recruited by Senator Bernard McGlinchey, for whom Victor – who has never tasted alcohol or smoked a cigarette in his 80 years – worked at The Golden Grill.

Victor Fisher blows out the candles on his birthday cake

In the 1970s, Victor was first elected as a member of Letterkenny Urban District Council. He retired ‘undefeated’ – a badge he wears proudly to this day – and was elected seven times in successive elections. There remains no doubt that wearing the Mayoral chain of the Cathedral Town in three different spells remains his greatest honour.

Having worked for around 30 years in Harris’ Shop on the Main Street, he opened Victor’s Gift Shop, which became a popular posting and an integral part of the town’s fabric, next to the Post Office.

“I really loved working in the shop and meeting people,” he says.

“The shop gave me a good way of meeting people and people were abel to come into the shop if they had any problems or things they wanted the Council to sort out.

Victor attended primary school at the Port Road and spent five years at the Royal and Prior Comprehensive School in Letterkenny. He married Helen and the couple lived first at McNeely Villas and later moved to Kiltoy, where they still reside.

The family home is called ‘Anfield’ – a pointer to Victor’s other great interest in life: football and especially Liverpool FC.

The beginning of his engrossment in Liverpool was via his sister, Eileen, who went to work as a nurse on the Isle of Man. She nursed a man, Peter, who helped get tickets for Liverpool matches.

“I fell in love with the way Liverpool played football,” he says.

Football had always been important, though.

He says: “The football was a part of my life from we moved to Rosemount. I remember going to watch Swilly Rovers play in the big FAI Junior Cup matches back in the 1960s.

“When I first came to Rosemount, all the soccer was played down there. I used to love going to watch the summer cups. A lot of Derry teams used to come out to play in those cups. There were some brilliant teams and players to watch.”

He was heavily involved in Finn Harps for around 30 years, traveling and working alongside his fellow Oldtown resident Johnny Gallagher (RIP). Victor was immersed in the ways of the Navenny Street club until around 15 years ago.

He says: “I was 30 years involved at Finn Harps, doing the gate, collecting money and selling tickets. I’d have taken in about €500 a week for Harps through those years.”

He was coaxed by Dessie Kelly into going onto the committee at Letterkenny Rovers. Just last week, Victor was returned for another term as Letterkenny Rovers’ Vice Chairman and he remains a vital cog in the wheel at Leckview Park.

Pub-goers and revellers in the town will know Dessie and Victor as Letterkenny Rovers’ lotto sellers. Just like when he was canvassing votes, Victor never misses a person, while he is also a strong supporter of Rovers’ Thursday night bingo at the Station House Hotel.

“I love meeting people and chatting to people. I still meet people now who knew me from the days working in the pay box at The Grill. I don’t know who a lot of them are, but people always come over to talk to me.”

With that, someone puts a friendly hand on his shoulder to wish him happy birthday. The friendly slagging of his lunch colleagues is never too far in the distance as the talk begins again.

Another someone he can relate to and reminisce with: Just how he has always liked it.