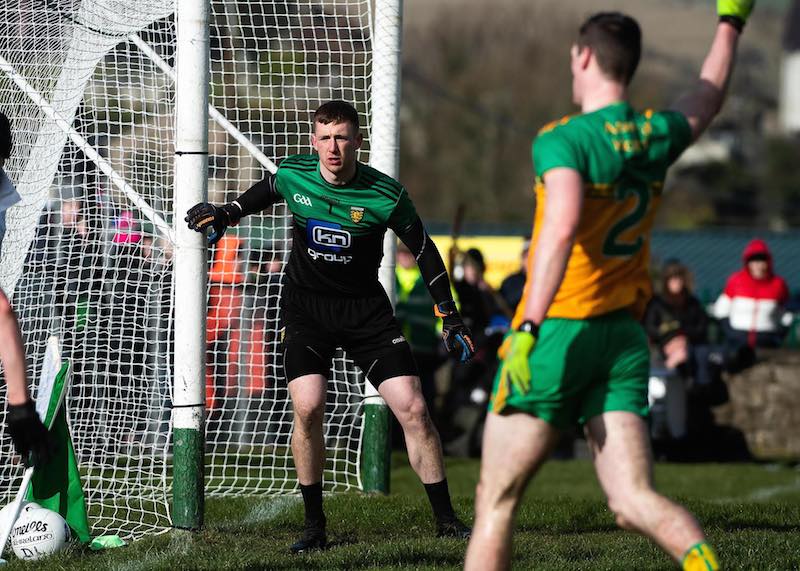 DONEGAL’S Shaun Patton has spoken about the pressures of being a goalkeeper.

Patton has been a revelation since being convinced to come into the Donegal set-up by Declan Bonner following a spell as a ‘keeper in the League of Ireland.

The Letterkenny man is recognised now as one of the top goalkeepers in Ireland at the moment, with his frighteningly-accurate booming kick-outs a particular feature of his game.

It can be a lonely and often unforgiving position, though, as Patton learned a few weeks ago when a late error resulted in a game-turning goal scored by Dublin’s Paul Mannion.

“I felt there are times when I’m doing well, doing bits and bobs well, but I was very disappointed with the goal against Dublin,” Patton told Donegal Daily/Donegal Sport Hub.

“I felt confident going for the ball, but I made a fumble and it ended up in the back of the net. It was hard to take because it led to us losing the game. It’s small margins and part and parcel of being a goalkeeper.

“I’ll learn from it and hopefully there is a lot more to come. I want to get better in every game. If you make a mistake you have to take it on the chin.

“I love the extra pressure and I always have loved it. You’re never going into a game bored because any mistake or slight error you’re the villain, or any save and you’re the hero. That’s what goalkeepers live for. You can’t go into a corner and dwell on it. That would be a selfish mentality to only think about yourself.”

Patton said: “It’s a massive game. You could look back on games we should have taken points from. There were small margins and individual mistakes that cost us and we’re in a situation now where we have to beat Tyrone.

“Everyone embraced the bit of extra pressure and we performed well against Monaghan. It showed in the performance how much it means to us and we need to play in Division One. That’s vitally important.

“Every game we play now is must win. There is no time to take the learnings now; we have to win football matches.”