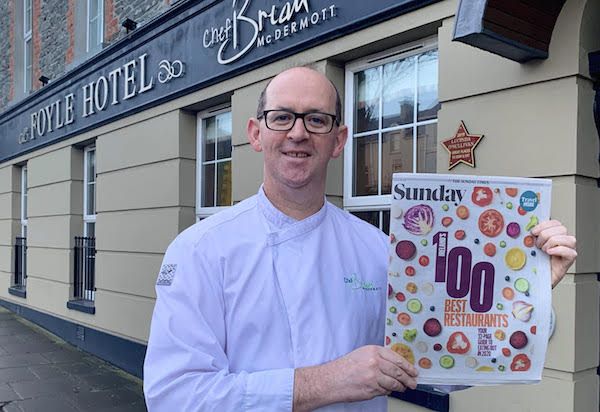 The hugely-successful Foyle Hotel in Moville has been forced to close its doors and temporarily lay off all 24 staff members.

The hotel is run by celebrity chef Brian McDermott.

Earlier today Brian was forced to gather his staff and inform them of the hotel’s immediate closure.

Brian, a hugely hard-working and successful businessman and chef, has championed the Donegal hospitality industry for many years.

But he told Donegal Daily that he has been physically sick after telling his staff that he had to close the doors of the hotel.

Mr McDermott said he had no option but to close the hotel after a massive cancellation in both hotel and restaurant bookings in recent days.

“I can’t tell you how I feel because I really have no words to put on it. My staff are everything to me and to tell them I had to lay them off was the hardest thing I have ever done.

“We have all put so much into this hotel and restaurant. We were on the crest of a wave and working really hard before the summer season kicked in.

“And then this happens and it is all taken away in a matter of a couple of days. I’m just sick, physically sick,” he said.

Brian added that it is also the uncertainty of how long the virus and the fallout from the virus will remain with us is what makes it more difficult to take.

He also suggested that companies must be given some sort of financial room form the banks and other institutions when they do finally reopen.

“We will reopen again but I honestly cannot say when. We just don’t have the answers and that’s one of the most frustrating things abut the situation we all find ourselves in.

“We need the banks to work with us when we do reopen. Businesses who have been forced to close will need at least six months support to get back up and running again,” he added.