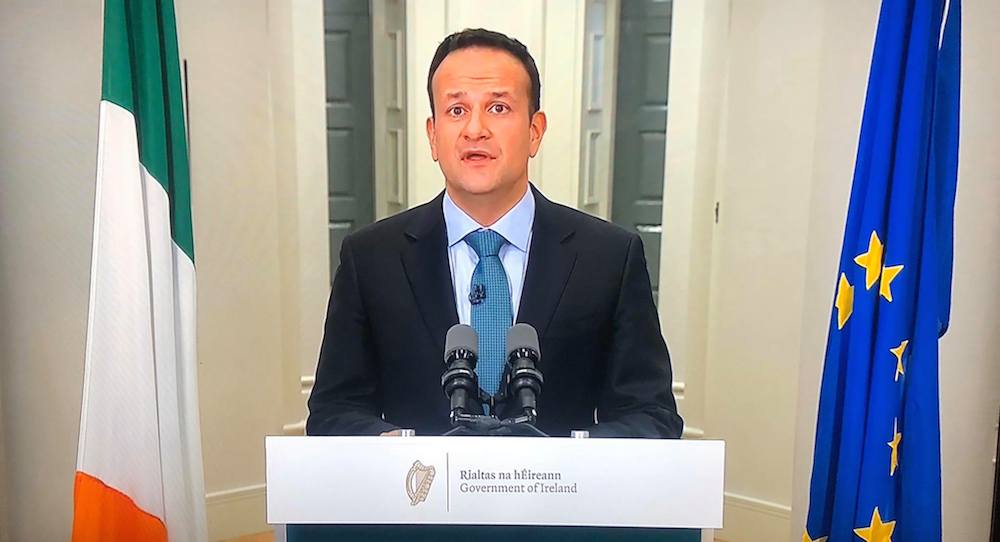 “We’re in this together”: Varadkar says Covid-19 emergency could continue into summer

TAOISEACH Leo Varadkar says he expects that the coronavirus emergency will continue well beyond the end of March.

In a State of the Nation-style address tonight, Varadkar urged the Irish people to ‘be sensible’.

The rare, Ministerial Broadcast was shown in place of the Nine O’Clock News on RTÉ  and also shown on Virgin Media.

Varadkar said that today had been ‘a St Patrick’s Day like no other; a day none of us will ever forget’.

“We are in the middle of a global and national emergency; a pandemic the likes of which we have never seen before,” he said.

There were a total of 69 new coronavirus cases confirmed today, with five of those in the north-west.

The overall number of cases in the Republic of Ireland is now 292 and a total of 6,636 Covid-19 tests have been carried out.

With 62 confirmed cases in Norther Ireland, there are now 354 cases on the island of Ireland.

Varadkar says that there is expected to be 15,000 cases by the end opt March.

“We cannot stop the virus,” he said.

“We can flatten the curve, but only if everyone takes sustained action. Nothing less will do.

“This is the calm before the storm before the surge. And when it comes – and it will come –  never will so many ask so mach  of so few. We will do all that we can to support them.

“Many of you want to know when this will be over, but the truth is that we just don’t know yet. This emergency is likely to go on well beyond March 29th and it could go on for months into the summer. We need to be sensible in the steps we take.”

Varadkar said that essential services and supply chains will not be disrupted.

He said that the recent cancellations and the closure of the country’s pubs as emergency measures were not easy choices, but added: “They are necessary and more will be needed in the coming weeks to reduce the spread of the virus.

“All resources available, financial and human, are being deployed to serve this great national effort.

“We are watching what’s happening around the world and we will learn from the experience of other countries, what works and what doesn’t.”

Varadkar said that there will come a time when the elderly would have to stay at home for a number of weeks. Good and services would be brought to those who would be ‘cocooned’.

He said that adjusted opening hours may come into play and reminded the public of the need for their co-operation to make social distancing work.

Paying tribute to the country’s healthcare workers, he said: “Not all superheroes wear capes; some wear scrubs and gowns’.

Contingency plans are being put in place for school and college exams.

With much of the country in shut-down and many people having lost their jobs, Varadkar acknowledged the ‘huge stress and anxiety’.

However, he said: “We will get through this and we will prevail.

“We went into this crisis with a strong economy. We have the capacity to borrow billions if we need to and I am confident our economy can bounce back. But the bill will be enormous and it will take years to pay it.

“Tonight on our national holiday, I want to send a message around the world: we are in this together.”

The broadcast was made under Section 112 of the Broadcast Act, which provides broadcast time for the Government in the event of a major emergency.

“We’re in this together”: Varadkar says Covid-19 emergency could continue into summer was last modified: March 19th, 2020 by Chris McNulty