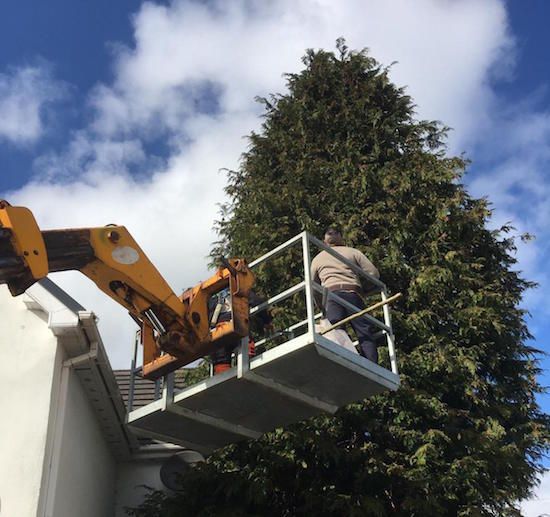 Delight as cat is ‘picked’ from tree after four day ordeal!

A family cat has been rescued after spending four days in “isolation’ up a tree!

The cat, named Cheetara, got stuck up the tree in Letterkenny on Monday evening last.

Despite numerous attempts to get it down, the stubborn moggy refused to move.

The cat’s cries for help could be heard during her ordeal but she was simply too scared to move.

Owners Daniel and Mary Crowley and their two children were left distraught.

Daniel, who is originally from Dublin, revealed to Donegal Daily he even scaled almost 40 feet up the tree to rescue the beloved two-year-old family pet.

He said “She got scared on Monday night and lept up the tree and just wouldn’t come down.

“We thought she would eventually come down in the dark but I guess she just got scared.

“I decided to scale the tree on Tuesday and got 40 feet up but the branches got too think and I had to come down. I was so close,” he said.

Local pet charity Animals in Need put out an SOS for help in coming up with ways of getting down from the 50 feet high tree.

Daniel said that even at a time when the country is in crisis it showed the community that is about.

“People have been so good. Everyone was concerned for her. I guess she put herself in self-isolation but we never thought it would come to this.

“It shows that in the middle of all we are going through with the coronavirus that there is such great community spirit here,” he said.

Delight as cat is ‘picked’ from tree after four day ordeal! was last modified: March 20th, 2020 by Staff Writer