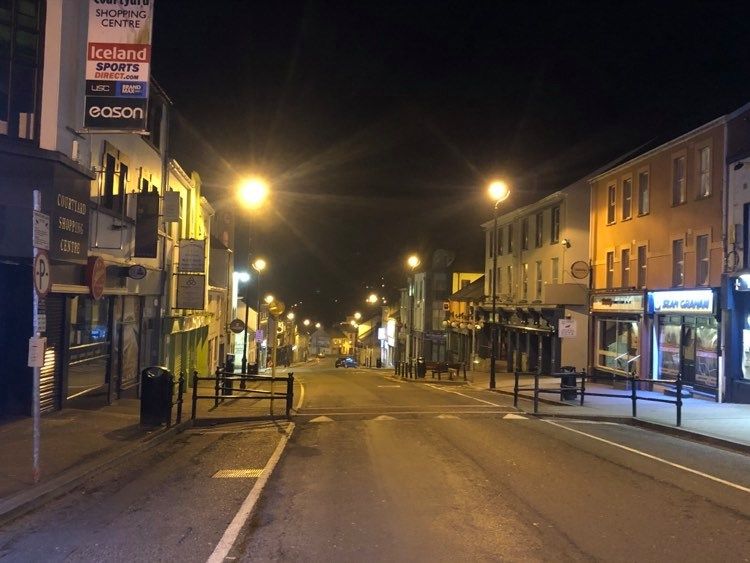 Nothing, only silence: Saturday night (cabin) fever in Letterkenny

IT IS a walk that has been made on countless Saturday nights, but never with such a setting.

It’s 9 o’clock on a Saturday night and I’ve ventured for a walk on Letterkenny’s Main Street to ‘clear the head’.

Usually, such strolls are reserved for well after the 9pm Saturday version.

These, though, are very unusual times.

The traffic lights at the top of the Port Road are about the only thing that has maintained a regular pattern of late. On they go, flicking red without even a hint of a frustrated clip of a steering wheel, oblivious to the empty swaths of tarmac stretching as far as the eyes can see.

The doors of the various public houses and nightclubs are firmly shut.

Bar a handful, at most, food emporiums operating takeaway services, the scene is replicated at the majority of Letterkenny’s popular eateries.

“Your well-being is important to us,” reads a hand-written notice at the Charcoal Grill. “Stay safe.”

A Big 4 Burger is out of the question until at least March 29. Management at the 4Lanterns, though, say they will be ‘reviewing the situation on an ongoing basis’. A notice on the window, which usually provides a much different Saturday backdrop, expresses the hope of being back to work ‘in the near future’.

Just when that will be, though, is anyone’s guess.

You’d expect – and know – this side of town to be hopping by now.

Tonight, there’s no live music emanating from McGinley’s as the doors creek open, the alley into Downtown knows only darkness, Voodoo is devoid of it’s usually palette of people and there is no fear of getting lost in McCafferty’s myriad of stairs and bars.

It was heartening, in fact, not to come across any groups, or ‘gatherings’ as they’ve been termed, converging around Letterkenny.

The only music playing comes from the speaker outside Callaghan’s XL, the only flashing lights are from one on the blink on a gable wall and the only smoke machine in town is from the poor unfortunate who appears to have missed the last bus home.

The taxi rank at the Market Square is bare.

There are no disorderly queues tonight and the sole person grappling with a refusal to go in the same direction is the man on the leisurely stroll with his dog.

The silence itself speaks volumes.

And yet, in a strange – eerie, even – sort of way, it felt very much alive in its distant togetherness.

Nothing, only quietness, at the Market Square, in Letterkenny